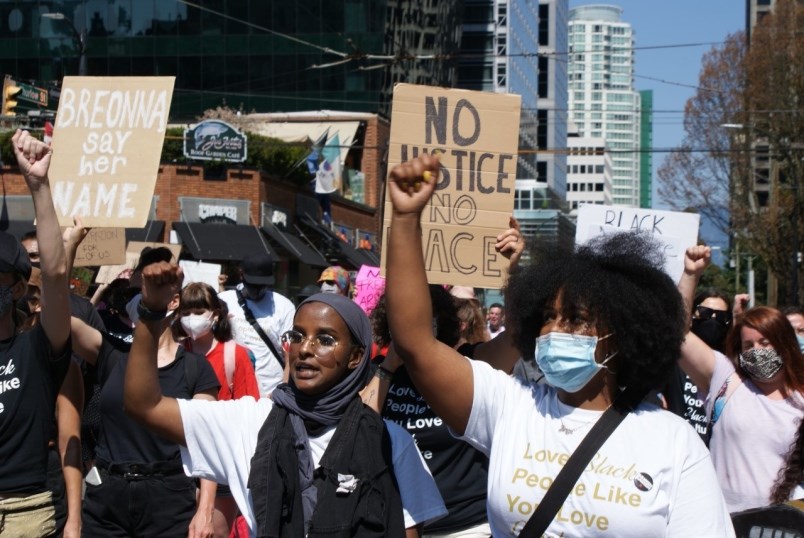 Demonstrators in Vancouver Saturday mark the anniversary of the abolition of slavery in Canada PHOTO: JEREMY HAINSWORTH

A full-throated roar for justice rang through downtown Vancouver streets August 1 to mark Emancipation Day, the 186th anniversary of the day slavery was abolished in Canada and throughout the British Empire in 1834.

“We’re the second province in Canada to have August 1 as Emancipation Day,” said organizer Nova Stevens, a copy of a City of Vancouver proclamation in her hand.

The event began under the Olympic torch at Jack Poole Plaza and moved up Thurlow through the wind blowing under the wings of the statue of Nike, the Greek goddess of victory. The destination: Sunset Beach for speeches, music, cultural celebrations, soul food and fellowship.

There, the words “Black Lives Matter’ done in the colours of the rainbow paid homage to the Pride events ordinarily bringing hundreds of thousands to Vancouver’s West End for the annual Pride Week parade. That has been cancelled due to the pandemic, an abbreviated parade version expected to take place August 2 with 50 people at Davie and Denman streets at noon.

“Say his name,” Stevens and co-organizer Shamika Mitchell called to the marching crowd.

“George Floyd,” the crowd roared back.

The march follows Vancouver’s June 19 Juneteenth march supporting Black Lives Matter, a growing movement to raise awareness of Black issues in the wake of the death of George Floyd at the hands of Minneapolis police May 25. “I can’t breathe,” George said repeatedly while an officer knelt on his neck before as he died. That officer has been charged with second-degree murder while three others are charged with aiding and abetting second-degree murder.

Floyd’s death sparked outrage around the world but particularly in the United States where thousands took to the streets night after night, evoking memories of the 1960s’ civil rights movement led by people such as Martin Luther King Jr.

Taylor was an unarmed 26-year-old woman fatally shot in a barrage of seemingly out-of-control police gunfire in Louisville, Kentucky, on March 13.

“It has died down,” Stevens said. “It should not be a trend. It’s not a hashtag. It’s not a black square.”

“We’ve experienced a racial problem that has gone on for hundreds of years,” she said. “We don’t want it to be a trend.”

Stevens called on people not to just be bystanders in making change. “Use your voice. A voice is powerful beyond measure. You don’t need to be a follower. You can lead.”

Stevens said organizers have been very cognisant of organizing a large event as the COVID-19 pandemic continues.

She said masks, hand sanitizer were on hand with social distancing protocols in place. Medical teams in white shirts with red crosses circulated in the crowd.

“We just want to create change,” she said.