Over 1,100 residential units to be built near Richmond’s Brighouse Station

Three major developments, including nine highrises — one has an inclined buidling form (above right) — and 1,132 residential units have been proposed to the City of Richmond for No.
Sep 6, 2018 4:03 PM By: Daisy Xiong 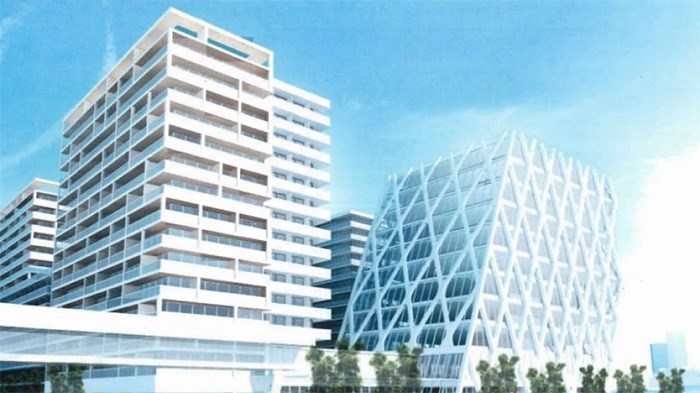 Three major developments, including nine highrises — one has an inclined buidling form (above right) — and 1,132 residential units have been proposed to the City of Richmond for No. 3 Road near Brighouse Canada Line Station | GBL Architects

The historic shops and restaurants on No. 3 Road, across the street from Richmond Centre, will soon be all gone and replaced by nine new towers.

The three newly proposed developments at the No. 3 and Cook roads intersection will include 1,132 residential units, which are part of a “Brighouse Village” the city has planned near the Brighouse Canada Line station.

On a 3.2-acre land parcel at 6340 No. 3 Road, which was home to dozens of businesses, including Bob’s Subs, three 15-storey residential towers and a 12-storey office tower will plow skyward.

These buildings will include 546 residential units, ground level retail space, 856 parking stalls and an “Early Childhood Development Hub” – a 19,000-sq.-ft. facility that will provide space for up to four child care programs, according to a city report.

The rooftop of a site-wide podium will serve as an outdoor amenity space for the complex’s residents, boasting a 9,000-sq.-ft. outdoor playground for the childcare facility.

GBL Architects has released its design of the four buildings. One building has an inclined form wrapped within a white-coloured steel exoskeleton, which the company says will stand as a new “landmark” in Richmond. 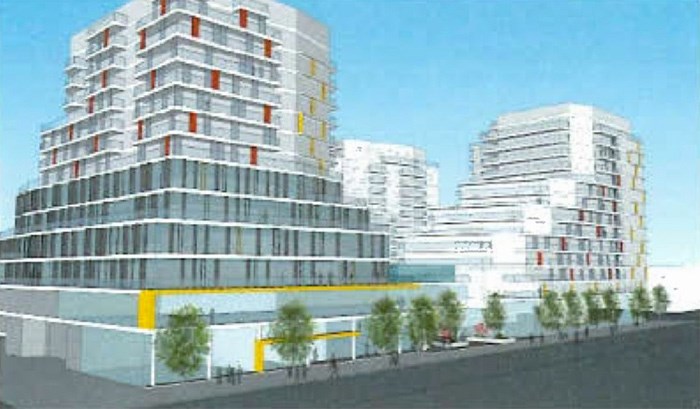 Development proposed for the site at 8071 and 8091 Park Roadl (W.T. Leung Architects photo)

A major redevelopment is also proposed for the site at 8071 and 8091 Park Road, known to many residents as the Time Square Mall.

A 3,961-sq.-ft. public plaza, Park Road Plaza, has been planned on the south side of the property.

For a 52,000-sq.-ft. site between the two major developments (6560-6700 No. 3 Road), the City of Richmond has also received a rezoning application and a proposal to construct two residential towers, with 12 and 15 storeys each.

This development includes 166 residential units and 224 parking stalls, as well as retail, restaurant space and outdoor residential amenity space on the podium rooftop.

All three developments will ensure five per cent of the residential dwellings are low-income rental units, which tallies to 57 units in total. 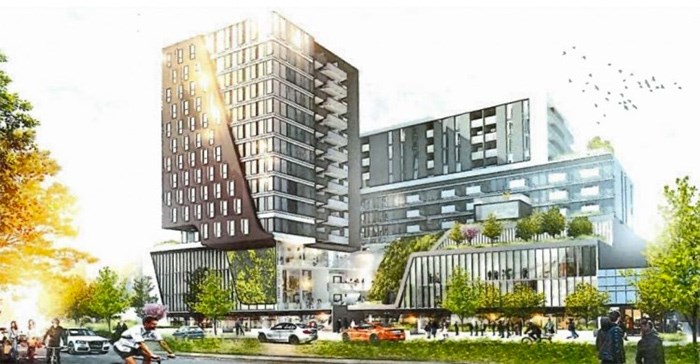 For a 52,000-sq.-ft. site between the two major developments (6560-6700 No. 3 Road), the City of Richmond has also received a rezoning application and a proposal to construct two residential towers | Dialog Architecture photo

With a veritable swarm of potential residents moving into the area, Ted Townsend, spokesperson for the City of Richmond, said the city is working to increase bus services and create a “nice environment for cyclists” in the area to ease transportation pressure.

As a condition of the rezoning, developers will have to fork out to widen roads and to develop off-street bike lanes in the redeveloped area.

More than 1,000 bike parking spaces will also be provided in these properties.

“Other measures include providing dedicated parking spaces in the area for car sharing vehicles and the imminent start-up of the new U-Ride bike sharing program, which will be primarily based within the City Centre in its initial phase,” said Townsend.

As part of the redevelopments, a major new “bus mall” adjacent to the Brighouse Station will be built at the corner of No. 3 and Cook roads.

“[It’s] an area where numerous buses can park at the same time in order to allow easy transfer between buses serving different routes,” said Townsend.

“When completed, this will enhance and consolidate connections between the Canada Line with many of the routes that feed in and out of the City Centre,” he added.

As for parks, Townsend said the city plans to upgrade more neighbourhood parks to “improve the level of service it provides for the growing neighbourhood population.

“Lang Park, which is the heart of that area, just underwent a major upgrade to improve the level of service… Improvements are also planned for Cook Neighbourhood Park,” said Townsend.

“We are also doing a new master plan for Minoru Park...in the long term, new parks will be created within the City Centre.” 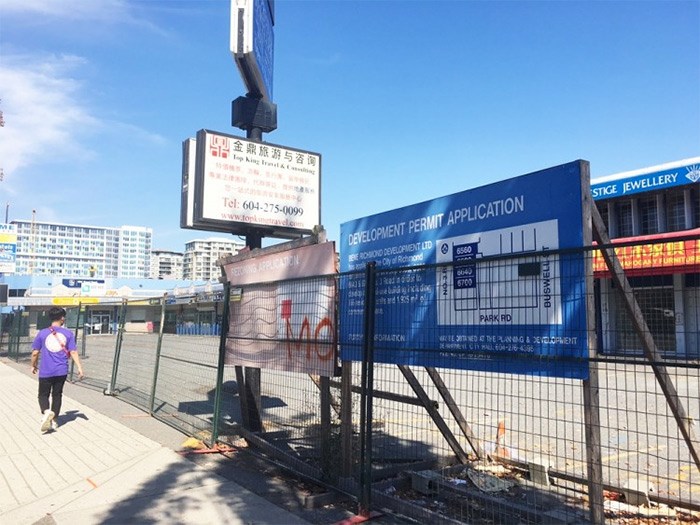 Shops at No.3 and Park roads are closed down | Daisy Xiong photo