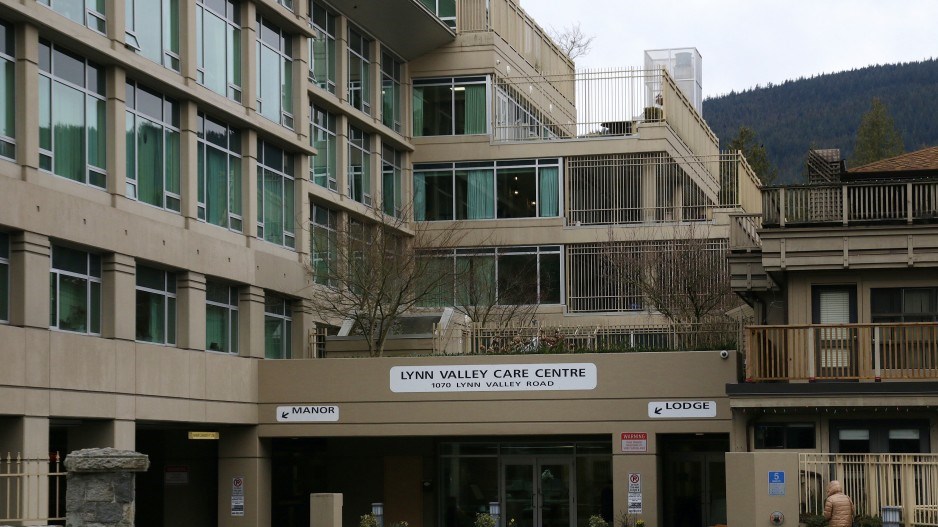 North Vancouver's Lynn Valley Care Centre has 63 infections, including 42 residents and 21 staff. Eleven of those cases have resulted in death. Photo by Rob Kruyt/BIV

What happened: A care worker at Vancouver's Broadway Pentecostal Lodge has tested positive for COVID-19, making that lodge the ninth seniors' care home in the province where a positive test has been recorded.

Why it matters: It shows that the global pandemic continues to strike B.C. seniors' care homes, where the residents are more vulnerable to die. So far all 14 deaths in the province have been among people older than 70 years old.

Seniors' homes in B.C. recorded 16 new cases of COVID-19 in the past day, Provincial health officer Bonnie Henry revealed March 25. Overall, there were 42 new cases recorded in the past 24 hours, she said.

No new cases were recorded at North Vancouver's Lynn Valley Care, which was the first one in the province to report cases. It has 63 infections, including 42 residents and 21 staff. Eleven of those cases have resulted in death, including one in the past day.

The other care homes in the province that have reported cases of COVID-19 include:

All of those homes have only one case, with the exception of Hollyburn House, which has two cases: one resident and one worker.

Henry has said that many of the care home infections may have been related and caused by care home staff working at multiple homes. She in the past week issued an order that care-home staff only work at one facility.

Despite that, yesterday, she told media that she was not sure if the order was being adhered to fully, but that it would be "worked out by the end of the week."

Business in Vancouver on March 25 asked Henry during her press conference what was taking so long and what the glitches were in having care-home operators abide by her order.

She said it was complex.

"What we will do over the coming days is have a centralized assignment of people so that people work at one facility only," she said. "What is the challenge is, over the last 20 years, there have been contracts and subcontracts for different types of workers, particularly in long-term care – so whether it is nurses, or care aides or the food-service people, the cleaning in those facilities."

There are many different types of contracts. There are also many different kinds of care homes, some of which are owned by health authorities, some private and some hybrid.

"The types of subcontracts they have are myriad and complex," she said. "So it's not as simple as saying, 'OK, everybody. You just need to go to one facility only,' because that would have left other facilities potentially with an extreme shortage."

Medical health officers in Vancouver Coastal Health and Fraser Health have put specific orders on each of the care homes that have been identified as having outbreaks of the coronavirus so no staff are also working at other facilities, Henry said.

"Now we need to do that on a broader scale," she said. "As you can imagine, with some unionized, some non-unionized, the wage scales are different as well. We're coming out with a provincial central strategy that provides a consistent approach to all facilities across the province focusing on the Lower Mainland right now. That has been a very complex program. But it is starting. The outbreak facilities themselves are first, and have started already but we will be moving for all facilities within the coming days."

TransLink driver tests positive for COVID-19
Apr 3, 2020 11:55 AM
Comments
We welcome your feedback and encourage you to share your thoughts on this story. We ask that you be respectful of others and their points of view, refrain from personal attacks and stay on topic. To learn about our commenting policies and how we moderate, please read our Community Guidelines.