A 330-pound bronze statue worth $24,000 stolen from outside a Vancouver gallery

The manager of a respected art dealer in Vancouver says a thief made off with a heavy bronze statue on display outside the gallery Monday morning.
Nov 5, 2019 3:04 PM By: The Canadian Press 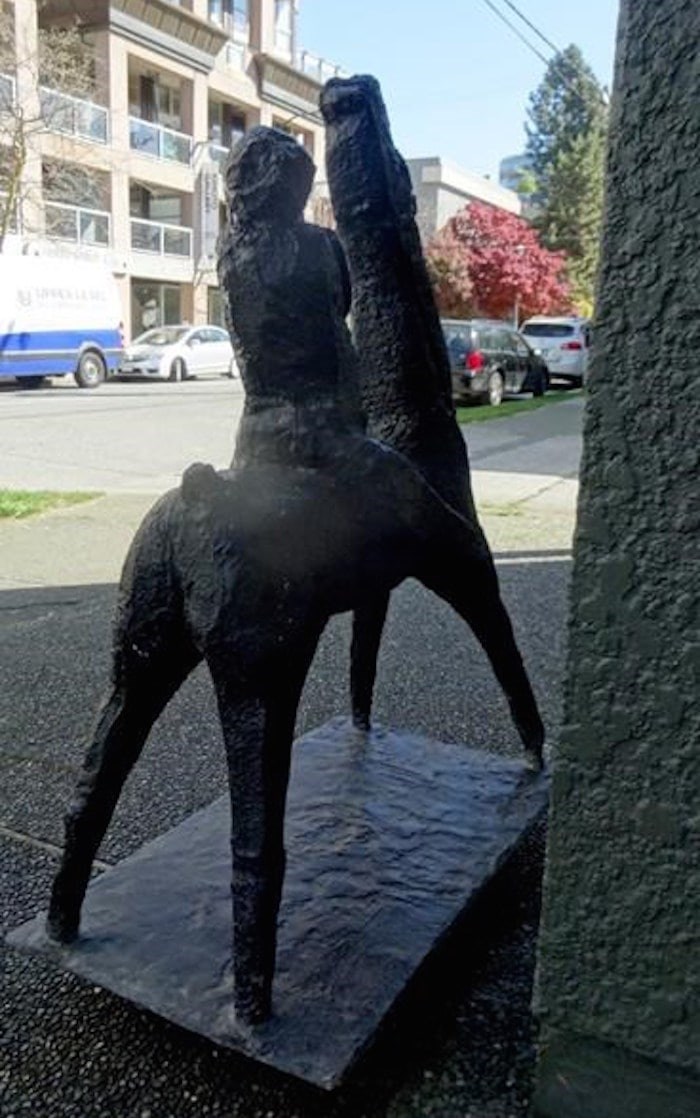 An undated handout photo shows a 150-kilogram bronze statue titled “After Marino Marini,” by the artist Fahri Aldin, which a manager says was stolen from outside the Petley Jones Gallery in Vancouver early Monday morning. THE CANADIAN PRESS/HO,VESNA ZARIC

VANCOUVER — The manager of a respected art dealer in Vancouver says a thief dragged a 150-kilogram (330 pound) bronze statue down seven or eight steps before loading it onto a cart and wheeling it away early Monday morning.

Vesna Zaric of the Petley Jones Gallery says the $24,000 sculpture titled "After Marino Marini" by acclaimed artist Fahri Aldin depicts an abstract figure on a horse and is more than a metre tall.

She says the gallery has owned the artwork for about four years and since moving to its location on Granville Street two years ago the piece has been sitting outside a secluded entrance.

Zaric says she and another worker tried to move the statue inside the building a few weeks ago for an exhibit but the two of them could not budge the heavy sculpture.

So Zarik says she was shocked to see surveillance video from a neighbouring business that shows a man dragging the statue down a flight of outdoor stairs, placing it on a trolley and rolling it away at around 5:20 a.m. Monday.

Zaric says the gallery filed a police report later that day but she fears the thief has already sold the artwork to a metal salvage business to be melted down.

"It's striking and confusing and disturbing to say the least. The intent was to provide something beautiful for this city to enjoy when they glance around our neighbourhood. Now that's gone after so many years," she says in an interview Tuesday.

"Unfortunately a lot of these (artworks) end up at scrap metal places. That is devastating to think that a beautiful, unique piece of art could end up chopped up and disappearing. It's very difficult to describe to me."

She says she's been calling scrap metal businesses to see if they recognize the statue. Police visited the gallery on Tuesday and told her they're checking with pawn shops, she adds.

Sgt. Steve Addison says police are investigating and no arrests have been made.

The incident is the latest alleged theft of precious metal art in the city. A giant golden egg was snatched from a $2.8-million Salvador Dali statue on display in downtown Vancouver in June and a 22-centimetre bronze statue was swiped from another art gallery on Granville Street in August.

This report by The Canadian Press was first published Nov. 5, 2019.