The City of Burnaby blocked off Shellmont Street near the Trans Mountain tank farm in Burnaby Friday morning.
0
Apr 27, 2018 11:25 AM By: Lauren Boothby 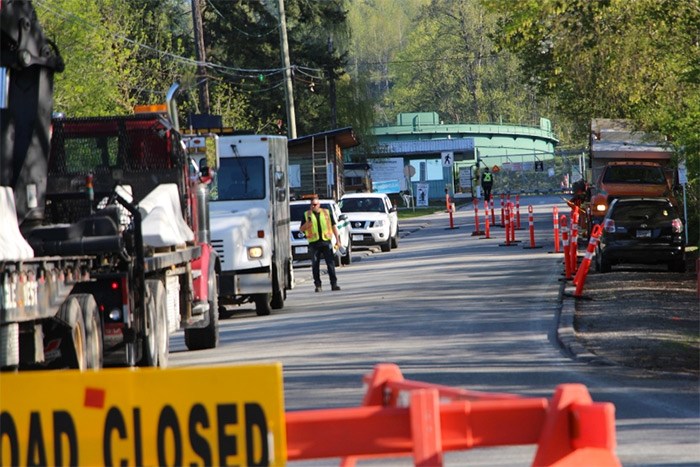 The City of Burnaby blocked off Shellmont Street near the Trans Mountain tank farm in Burnaby Friday morning. Photograph By LAUREN BOOTHBY

The City of Burnaby is installing 700 metres of cement barricades around the entrance to the Trans Mountain terminal this morning because of safety concerns raised by people living in and using the area.

Workers closed off road access east of Shellmont Street at Arden Avenue/Greystone Drive, and north of Underhill Avenue at Broadway before 8:30 a.m. Trucks loaded with large cement barricades were seen on site and parked along Broadway, and erosion control trucks were seen heading toward the site.

Burnaby city manager Lambert Chu said the city is installing the barricades as a safety precaution.

“We had planned to install safety measures on Shellmont and Underhill rising out of concerns that had been conveyed to the city by the community in the area, residents in the area, and also occupants of protests in that area, regarding a number of things: speeding vehicles, and sometimes people are walking along the street and don’t feel safe,” he told the NOW.

While the general public was turned away, members of the Camp Cloud protest camp were allowed to stay after being warned that the site would be a construction zone until around noon Friday.

“We respect the right to protest and freedom of speech, and at the same time we’re mindful that we need to maintain public safety on city roads as well,” he said. “Camp Cloud is allowed to remain under the court order issued by the Supreme Court of B.C., so we don’t have the authority to remove the camps.”

Those staying at the camps were cooperative with the city this morning, he said, and agreed to move some of their structures to accommodate for the barricades.

“It remains to be seen how many of their tents, structures and facilities will be moved, but we are very mindful of their safety and the safety of people who use Shellmont and Underhill,” he said.

Work is expected to be complete by noon Friday.