A controversial Facebook page representing the Burnaby North-Seymour Constituency Association has disappeared from public view or been deleted.
0
Oct 5, 2019 4:35 PM By: Chris Campbell

A controversial Facebook page representing the Burnaby North-Seymour Constituency Association has disappeared from public view or been deleted. 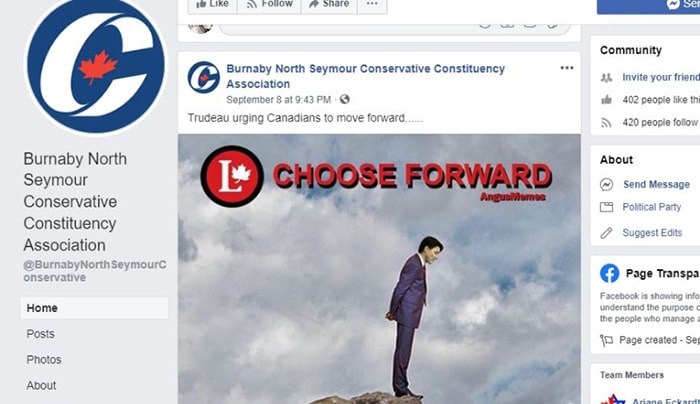 A meme urging Prime Minster Justin Trudeau to walk off a cliff was posted by the Burnaby North-Seymour Conservative Constituency Association while Heather Leung was still the candidate. Screenshot/Facebook

A search for the page as of 10:30 a.m. on Saturday morning no longer shows the page on Facebook. This is the day after the riding’s candidate, Heather Leung, was dropped by the Conservative Party of Canada due to homophobic comments revealed by the Burnaby NOW and other media outlets.

The page made news a couple of times early in the campaign for posting a meme encouraging the death of Prime Minister Justin Trudeau and altering a quote by TV star Rick Mercer and then turning it into a meme.

Both posts had to be removed and the Conservatives told the media that the person responsible for them would no longer be allowed to post to the page.

It’s unclear if the page was taken down by the local association or the federal party or, perhaps, a third party who had access to the page.

Leung, according to her campaign manager Travis Trost, is still campaigning today as an independent candidate.