Everything you need to know about campfire bans in B.C.

A couple weeks ago I was sitting around the campfire pictured below, thankful that I had beat the ban that feels like it's been creeping earlier and earlier into our camping season the past few years.
0
Jun 15, 2018 2:48 PM By: Bob Kronbauer

A couple weeks ago I was sitting around the campfire pictured below, thankful that I had beat the ban that feels like it's been creeping earlier and earlier into our camping season the past few years.

Thinking this would be the last time I'd burn wood while seated in a lawnchair this season, I wanted to know why. So I reached out to the B.C. Wildfire Service and got the historical data showing the trends over the past 15 years.

According to the ministry, campfire bans "impede people's right to enjoy the outdoors", and the decision to put one into place is not done arbitrarily nor is it ever a decision made by an elected official. The decision is made by a group of senior officials. Wildfire experts who look at scientific data, current fires burning, weather, resources, and a number of other factors.

On many years there will be a number of bans. A good rainfall in August could change conditions entirely and justify lifting a ban that's been put in place, only to have it put back in again a couple weeks later when the variables change.

Charting the data from the past few years I was actually surprised to find that the ban on campfires in the Coastal region isn't being implemented earlier every year. In fact 2016 had the latest first ban of the season in more than a decade. Check it out below. 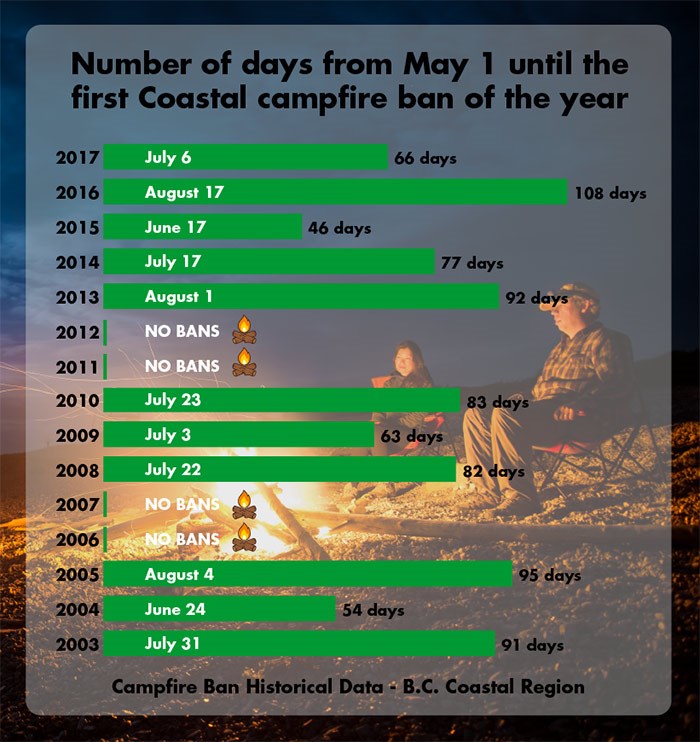 Historical data showing the first campfire ban of each season dating back to 2004. Graphic V.I.A.

Looking at this chart you might conclude that climate change isn't affecting B.C.. And you would be wrong.

The temperature is rising here, the forests are getting dryer, and our oceans and rivers are warming up to the point that salmon returns are being negatively impacted.

However last year we had well below the average number of wildfires in this province.

237 is the average we get in B.C. every year. The average of those that are caused by humans is 155. That leaves 84 being caused by lightning.

However last year we had way less than the average: 146 total for 2017. 137 of those were caused by humans and only 9 happened because of lightning (because there weren't many thunder storms).

The Information Officer for the Coastal Fire Centre, Donna MacPherson, tells me she thinks there were less fires last year because of better forest management (prescribed burns, etc) and because "people were being wise". They get less people breaking the rules in years that are dry, and she feels that people considered the weather last year and were careful with their campfires.

MacPherson also tells me that rain in June is critical in ensuring a mellower wildfire season. She and her team have been celebrating the June-uary we've had this year because the more it rains in this month the less intense the summer fires are likely to be.

I'm celebrating because that also means that the campfire ban will likely be delayed, and maybe none of my favourite campsites will burn down this year like they have in the past.

The months of July, August and September make up wildfire season in the Coastal region in which we live. In Prince George the season ends in August, and the north in general has climate issues we don't need to think about here. One of them is that when the snow melts, there's a layer of dead grass that's immediately revealed, making the perfect conditions for early season wildfires.

But I digress. We're talking about campfires on your weekend adventures from Vancouver. 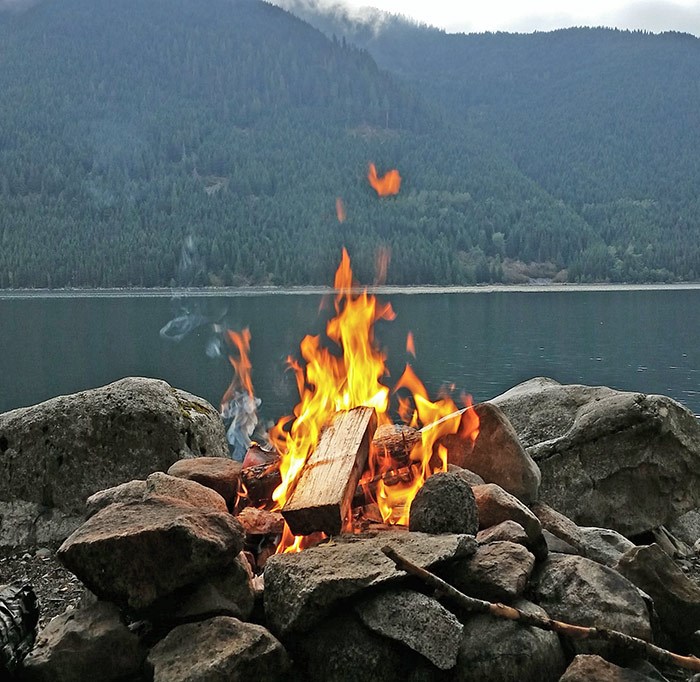 From what Donna tells me the wildfire season is looking to be coming in late this year. My campfire pictured above will not be my last of this year, and I'd encourage you to get out there and enjoy one yourself.

And of course enjoy fires responsibly. Preventing wildfires is mostly common sense; save for the odd exception people don't go out planning to start a wildfire that devastates a forest and lands them in front of a judge. It's easy for a campfire to turn into a wildfire, so I've gathered some resources for you here.

First, if you're going camping anywhere in the province a quick check HERE will show you if there's a campfire ban in effect. You'll probably hear it through the local media, but check that link if you're not sure if there's one in effect. 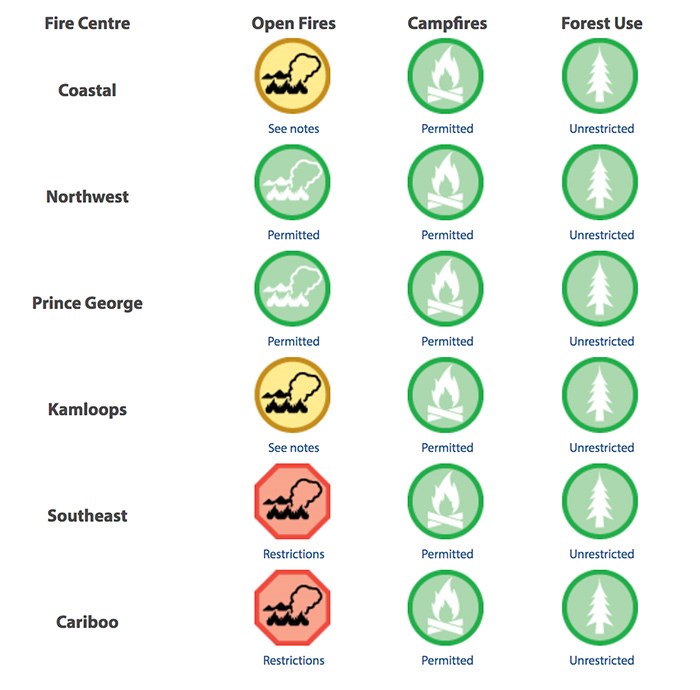 As of the time of this writing there are no campfire bans happening in B.C.. But always check before you go camping!

If you decide to have a campfire and there's a ban it's likely you'll be issued a "Failure to comply with fire restriction" ticket for $1,150.

I was told that people have called in to fire centres asking how much the tickets were, weighing the value of a fire against their dollars. Something you should know is that it's not per fire, it's per person standing around that fire. So let's say ten idiots decide that $115 each is a good deal to have a fire, the total ticket price would actually be $11,500. $1,150 each.

Don't be an idiot.

The general rules around campfires in recreation sites are as follows:

- While campfire is lit, keep eight litres of water and/or hand tools close by

- Do not light campfires during strong winds

- Do not cut trees or remove wood from the site

- Do not leave campfires unattended

- Before leaving, extinguish fires and make sure campfire bed is cool to the touch

If you're heading into a Provincial park the rules are a little different, as some parks don't allow campfires even when there's no region-wide ban in place due to wildfire hazard. The Corridor section of Mt Robson Provincial Park and the entire Stein Valley Nlaka’pamux Heritage Park near Lytton, for example. Checking the individual Provincial park page HERE will show you if and when you're allowed to have fires in these areas. If the "Fire" icon is highlighted, campfires are permitted somewhere in the park. If the icon isn’t highlighted, then campfires are prohibited throughout the park.

Have fun out there in the outdoors this summer. And again, don't be an idiot.