You're actually allowed to kill TEN Canada geese in B.C. in one day

Geese on Vancouver Island. Photo Darren Stone, Times Colonist Yesterday CTV reported that a man had been charged following the killing of a Canada goose in Stanley Park in front of an understandably horrified crowd.
Aug 8, 2018 9:16 AM By: Bob Kronbauer 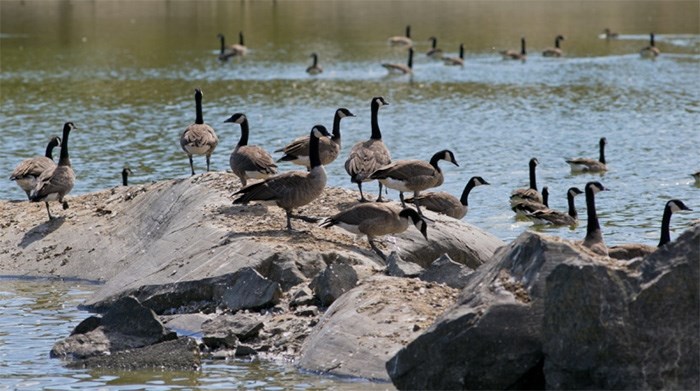 Yesterday CTV reported that a man had been charged following the killing of a Canada goose in Stanley Park in front of an understandably horrified crowd.

In their piece they interviewed a man who videotaped the aftermath of a man who reportedly clubbed the bird to death with a stick, then another witness who describes what happened. Watch it below.

The man arrested was from Maple Ridge, a town that has churned out its share of Stanley Park bird killers over the years. Back in 1992 a young man named Jason Laberge, dubbed "The Flamingo Killer", was convicted after slaughtering 6 captive flamingoes with his bare hands in the park.

However gruesome, illegal and absolutely wrong it is to end their lives in this manner, in this location, Canada geese are actually legal to hunt in this province. And they are delicious.

The daily bag limit (number you can shoot) for Canada geese in B.C. is 10. Reading the most recent hunting regulations the possession limit per person is 30 dead Canada geese.

While they've become a visual symbol for our country and our nation is built right into their name they're far from endangered or "a protected animal" as the man in the CTV piece mistakenly stated. They are in fact too abundant and are considered unwanted pests in many municipalities; they may be the most Canadian of all pests.

In 2015 the Capital Regional District on Vancouver Island had a permit to cull 250 of them. Last year they considered a similar one was considered in Nanaimo.

Open season for them starts in early September and ends near the end of December. The exact dates vary by region but you can expect that people are putting Canada geese on their tabes (and in their freezers) during these months.

People interested in hunting these birds will need to have their C.O.R.E. certification and obtain a hunting license. And of course you can't shoot or hunt in the city, however geese are hunted as close as Ladner.