Canadians warned to look out for invasive giant hogweed that burns, blinds

A giant hogweed plant is shown in a Nature Conservancy of Canada handout photo. Experts are warning Canadians to be on the lookout for a dangerous plant that can cause three-degree burns.
Jun 22, 2018 11:34 AM By: The Canadian Press 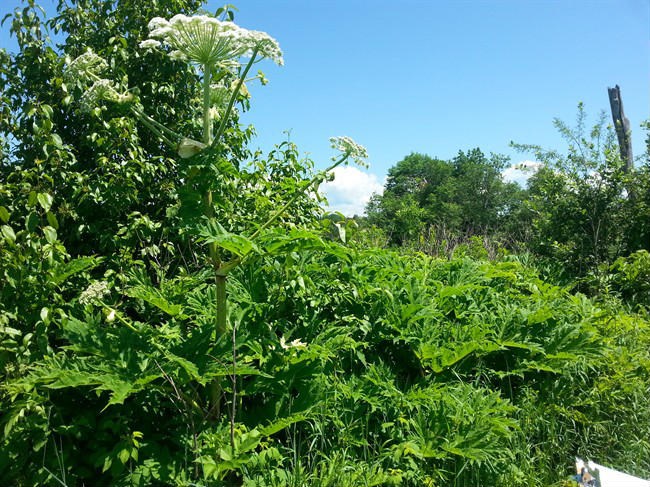 Canadians are being warned to look out for a dangerous, invasive plant that can cause third-degree burns.

The Nature Conservancy of Canada says giant hogweed is one of Canada's most dangerous plants.

The non-native plant grows up to six metres in height and has large clusters of white flowers at the top.

Its clear, toxic sap can cause rashes, blistering, burns and even blindness if it touches the body and is then exposed to the sun.

The group is asking people to document sightings of the plant, which is currently flowering.

It has been found in the Atlantic provinces, Quebec, Ontario and British Columbia, including cities like greater Toronto and Ottawa.

In 2015, five children in England were reportedly burned in two separate incidents after coming into contact with giant hogweed in public parks.

Dan Kraus, a biologist with the conservancy, said the invasive Asian species likely arrived in Canada in the 1940s as an ornamental plant.

Often mistaken for the similar-looking cow parsnip, it can be seen growing in gardens, along roadsides, in ditches and on the shores of rivers and streams.

"A single plant can produce thousands of seeds and it can spread quickly. The seeds are dispersed when they fall into rivers and streams, and can be dispersed short distances by the wind. Because it's a tall perennial, giant hogweed can take over large areas along rivers and streams, shade out all of our native vegetation and actually nothing can grow under it sometimes," Kraus said in a statement.

"In Europe, dense stands of giant hogweed along rivers have caused erosion and it has been identified as a serious threat to salmon spawning habits in Great Britain."

But simply touching the plant is not dangerous, experts stress. It's the sap that is problematic and washing your body and clothes after exposure can prevent the toxic reaction.

Kraus encourages people to report a sighting via the iNaturalist.ca app.