The St. Louis and Vancouver public libraries are facing off in a 'library rivalry' ahead of Game 6

This battle of the book spines is "the most wholesome thing you'll see all day," according to the NHL
Aug 21, 2020 3:46 PM By: Megan Lalonde 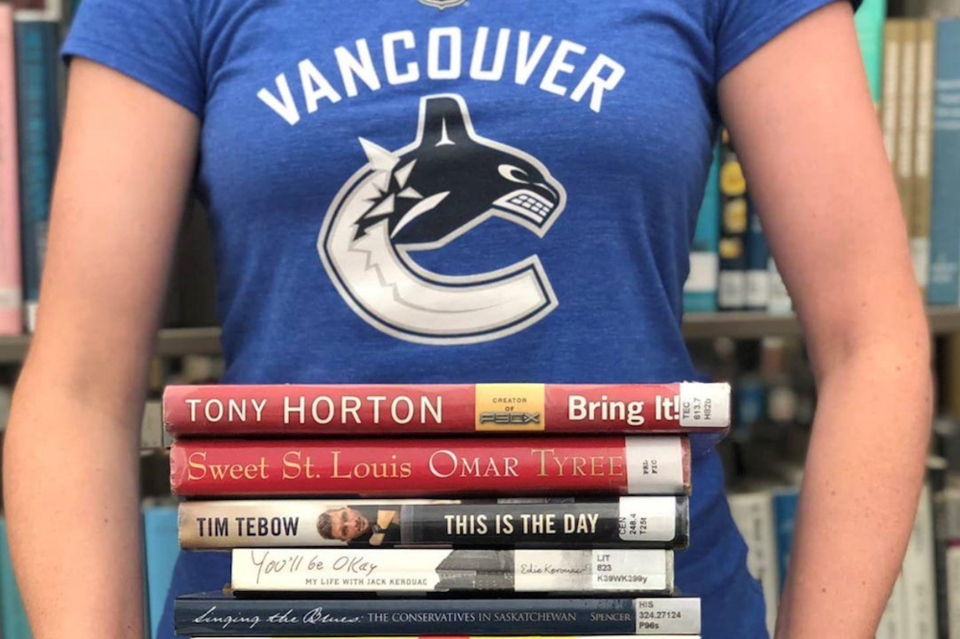 As the Vancouver Canucks get ready to face the St. Louis Blues in Game 6 of the first round of the NHL playoffs tonight, a different kind of battle is brewing between the two cities off the ice.

It all started on Wednesday, when the St. Louis Public Library challenged their counterpart in Vancouver to a "book spine challenge" on Instagram ahead of the pivotal Game 5. "We couldn't let a pandemic keep us from supporting our #StanleyCupchampion @StLouisBlues during playoffs," read the post.

Pictured against a "Let's go Blues" poster (and a bottle of hand sanitizer), library staff had stacked a few titles that doubled as digs towards the Canucks, including The Upside of Falling, You Won't See Me Coming, Here We Are Now, When the Blues go Marching In, and Six Feet Under.

Hey @VancouverPublicLibrary are your @Canucks ready for tonight's game? We couldn't let a pandemic keep us from supporting our #StanleyCup champion @StLouisBlues during playoffs. Are you up for a #BookSpineChallenge? #LGB

Not one to let a challenge go unanswered - particularly when the Canucks are involved - the Vancouver Public Library responded with a cleverly-stacked series of spines of their own. The B.C. library's post included a hilarious collection of titles like All The Best Games, Get Ready to Learn, 100 Ways to Beat the Blues, Worried, and simply, The Vancouver Canucks, Will, Beat and The Blues.

"Thanks @stlouispubliclibrary for breaking the ice on this friendly library rivalry," the post's caption read.

Feeling ready for our @canucks to take on the @stlouisblues! Thanks @stlouispubliclibrary for breaking the ice on this friendly library rivalry and #BookSpineChallenge. #gocanucksgo #stanleycup #playoffs #bookspinepoetry #vancouverpubliclibrary

A post shared by Vancouver Public Library (@vancouverpubliclibrary) on Aug 19, 2020 at 4:33pm PDT

As it turns out, the VPL was right.

B.C.'s hometown team is currently leading the series 3-2, after an epic comeback in Game 5 on Wednesday. That means they're just one win away from eliminating the defending Stanley Cup champions and advancing to Round 2.

Now, ahead of Game 6, the library rivalry is heating up. A second stack of spines posted to social media by the St. Louis library on Friday included appropriately-titled tomes like, The Well Played Game, Vancouver, If I'm Being Honest, The Game's Not Over, Hostile Territory, Moment of Truth, Been There Done That, and City of Champions.

Well @VancouverPublicLibrary, Game 5 didn't end like we had hoped, but honestly, been there, done that- we're used to watching our #StanleyCup champion @StLouisBlues battle back. It's kind of their thing! #BookSpineChallenge #LGB @NHL @Canucks @STLCityGov @CityofVancouver

"Game 5 didn't end like we had hoped, but honestly, been there, done that- we're used to watching our #StanleyCupchampion @StLouisBlues battle back," wrote the St. Louis library on Instagram. "It's kind of their thing!"

The VPL clapped back with their own curated stack of chirps Friday morning, featuring books like Bring It, Sweet St. Louis, This is The Day, You'll Be Okay, Singing the Blues, Good Luck, and Lords of the Rinks.

A post shared by Vancouver Public Library (@vancouverpubliclibrary) on Aug 21, 2020 at 11:23am PDT

As an NHL social media staffer quipped on Twitter, "Things just got serious."

The @STLpubLibrary and @VPL chirping each other ahead of tonight's Game 6 is the most wholesome thing you'll see all day. #MyPlayoffsMoment @StLouisBlues vs. @Canucks at 9:45 ET on @NHLonNBCSports and @Sportsnet pic.twitter.com/6CPrMbIgAl