Volunteer divers went under the Capilano River in North Vancouver to clean up debris left by hikers and fishermen. Finds included an iPhone and lots of fishing gear.
Sep 13, 2018 8:39 AM By: Maria Rantanen 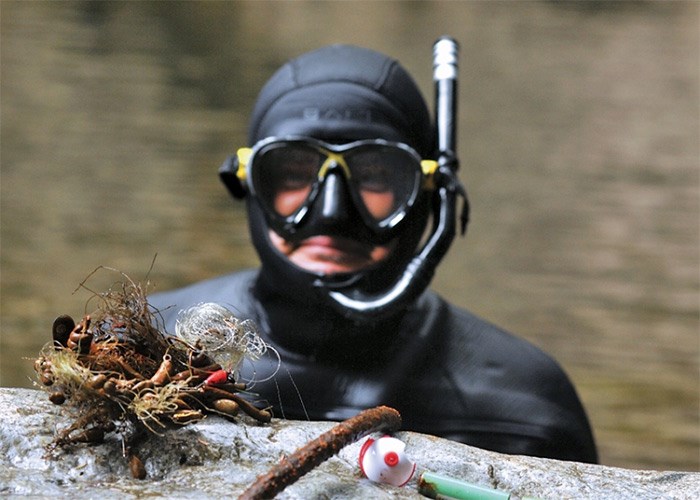 Underwater photographer Fernando Lessa, who is documenting the salmon in Metro Vancouver rivers, shows some of the debris collected by divers in the Cable Pools last Saturday. photo Paul McGrath, North Shore News

A group of divers converged at the Cable Pools on the Capilano River on Saturday and pulled out old fishing gear, Kevlar fishing line, fish hooks and other debris, totalling 85 kilograms in weight.

Fernando Lessa, a photographer from Lynn Valley, was taking photos of salmon early last week in the Cable Pools when he noticed the debris and contacted North Shore Streamkeepers to organize a cleanup.

Just five days later, a group of volunteers and divers got together to pull out the old fishing gear, including triple hooks and other barbed hooks, from the popular fishing spot.

“It’s not just a hazard for the fish but for the people around,” Lessa said about the found items. He was surprised at how resistant the new Kevlar fishing line was and how tangled it could get.

Lessa has been documenting salmon in streams across Metro Vancouver for two years, in West Vancouver, North Vancouver, Burnaby, Vancouver, Richmond, Surrey and Coquitlam, and he hopes to publish a book of his photos.

Lessa is a professional photographer, but his photos of salmon are part of a personal project to raise awareness about the salmon in the Metro Vancouver area. He explained that as an underwater photographer he has a unique perspective on the rivers and can see the salmon, largely invisible to most people from the surface. He wants to raise awareness about salmon “in our backyard,” especially the endangered steelhead salmon.

When Lessa found the debris in the Cable Pools, he contacted streamkeeper ZoAnn Morten, who then got in contact with Henry Wang from Divers for Cleaner Lakes and Oceans to organize the cleanup. In the end, the cleanup effort, organized within days of the first report, also included participation from North Shore Streamkeepers, Pacific Streamkeepers Federation, environmental staff from the District of North Vancouver, Metro Vancouver Parks and hatchery staff from Fisheries and Oceans Canada.

Morten was contacted by Lessa via Facebook and she went on to contact Wang via Facebook, starting an online conversation about how to best clean up the pools. While Wang’s group of volunteers usually work in lakes and oceans, nine volunteer divers were immediately willing to get to work cleaning up the Capilano River area.

“They were a joy to work with,” said Morten, who volunteers with the North Shore Streamkeepers, but also works for the Pacific Streamkeepers Federation.

The group collected about 27 kilograms of lures, weights and fishing lines from the bottom of the river where they had hooked on to logs and in between rocks. In addition, they found about 58 kilograms of steel and aluminum debris. Included in the debris was a cellphone, a vape, a lighter and a full can of Red Bull.

“Now that I’ve seen it, I wouldn’t want to walk barefoot in the Capilano River,” Morten said. “It makes you wonder how much (debris) is in all the rivers.” 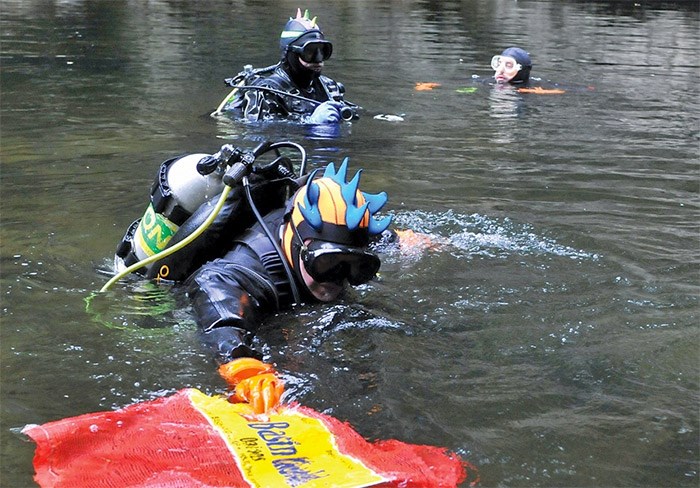 A group of nine divers from Divers for Cleaner Lakes and Oceans were cleaning up debris in the Cable Pools on the Capilano River last Saturday in co-operation with the North Shore Streamkeepers. They collected about 85 kilograms of old fishing gear and metal objects – photo Paul McGrath, North Shore News

Morten was worried about telling the fishermen who were out early – ready to catch some fish – that the divers needed to work in that area undisturbed for two hours, but the reaction was positive.

“It was an instant ‘thank you,’ and they all went to fish somewhere else and told others,” she explained.

It was important to do the cleanup quickly as the rain was in the forecast, and that would have made the waters too cloudy for a cleanup event, Morten said.

After the two and a half hours of cleaning, Wang started talking about coming back next year to see how much debris will have collected over the year, Morten explained. 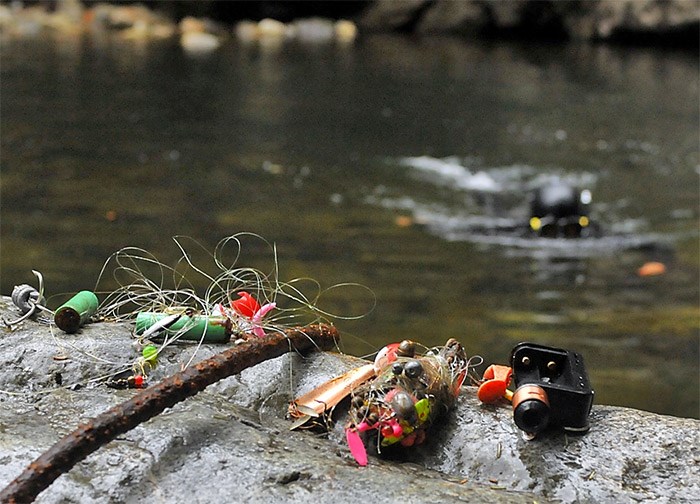 Some of the debris was on display at the Coho Festival the next day and some of it was taken by a local educator with the Seymour Salmonid Society to be used as educational material.