Chiefs have gathered in New Westminster, B.C., to commemorate an Indigenous leader who was wrongfully tried and hanged 154 years ago.
Jul 18, 2019 3:26 PM By: The Canadian Press

NEW WESTMINSTER, B.C. — Chiefs have gathered in New Westminster, B.C., to commemorate an Indigenous leader who was wrongfully tried and hanged 154 years ago. 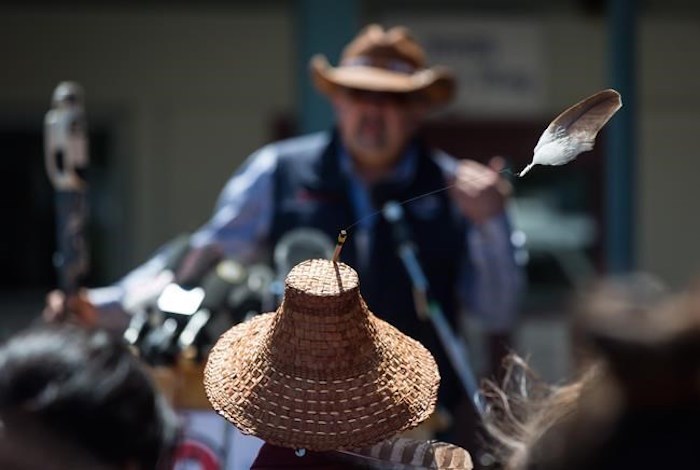 An eagle feather attached to a hat worn by Kwikwetlem First Nation Chief Ed Hall blows in the wind as Chief Joe Alphonse, back, Tribal Chair of the Tsilhqot’in National Government, speaks during a ceremony to commemorate the wrongful trial and hanging of Chief Ahan, in New Westminster, B.C., on Thursday July 18, 2019. Chief Ahan, who was hanged in the city on July 18, 1865, was one of six Tsilhqot’in First Nation chiefs who were executed following the Chilcotin War between the Tsilhqot’in people and European settlers. THE CANADIAN PRESS/Darryl Dyck

Chief Ahan was hanged in the city's downtown on July 18, 1865, and a ceremony memorializing his exoneration was held at a high school today where the Tsilhqot'in Nation believes its ancestor could be buried.

Chief Joe Alphonse, tribal chair of the Tsilhqot'in National Government, says the nation had asked the province and school district to conduct DNA tests if the remains are ever found, but neither has agreed.

Alphonse says their chief was wrongfully executed and they want his remains returned to his homeland in B.C.'s Cariboo region.

Historian Tom Swanky says Ahan was arrested in May 1865, nearly a year after five Tsilhqot'in men were hanged during the Chilcotin War, when Indigenous leaders reacted to an attempt by settlers to deliberately spread smallpox for a second time.

Swanky says Justice Matthew Begbie, whose statue was removed earlier this month from in front of the provincial courthouse in New Westminster, ordered the hanging of the other five men but was not connected with Ahan's case.

He says all six Tsilhqot'in leaders were arrested and given brief trials before five of them were hanged in Quesnel and Ahan later met the same fate in New Westminster.