“The traditional image of masks is so strong in mainstream society that many people treat the masks as only being worn by those who have disease or those who work with patients"
0
May 20, 2020 8:26 AM By: Chuck Chiang 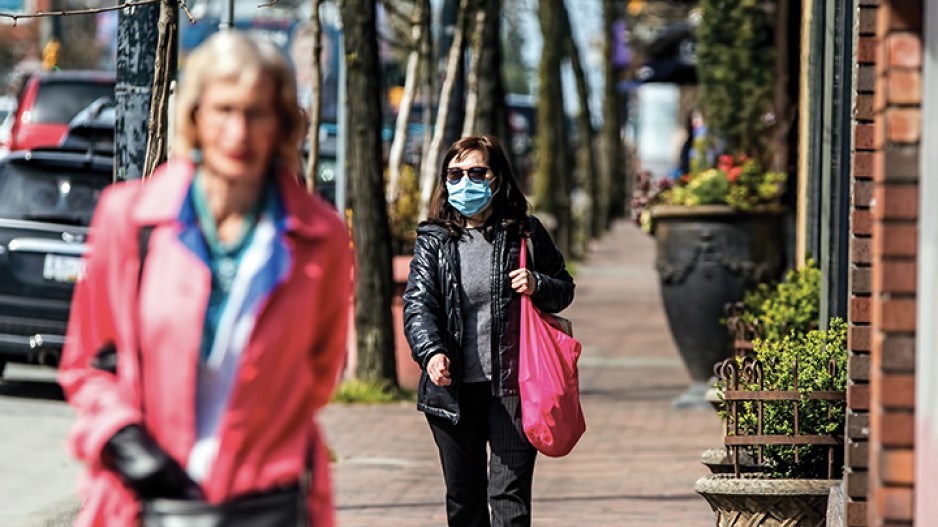 With Ottawa and other global health authorities urging people to wear face masks in public in the fight against the spread of COVID-19, Metro Vancouver’s Chinese-Canadian community hopes mask wearing will now become less stigmatized.

While Canada’s chief public health officer Theresa Tam did not recommend that people wear face masks in public until early April, the local Chinese community had already been putting masks in heavy everyday use since as early as late January when the coronavirus outbreak in China was first reported.

At that time, many people in the local Chinese community reported their wearing of masks being stigmatized by others in the general public, with people either avoiding those wearing one or – in rare cases – criticizing the behaviour as overkill.

“There are people that I know in Vancouver who started wearing masks way before that advice was given,” said former Vancouver councillor and SUCCESS CEO Tung Chan. “Some of them had to bow to public pressure to do as the Romans do when in Rome; so in those cases, they’ve lowered their masks, albeit very reluctantly. They didn’t want to stick out.”

Veteran journalist Victor Ho, the former editor-in-chief of Vancouver’s Sing Tao Daily newspaper, said many people from Hong Kong reacted strongly to initial news of the COVID-19 outbreak in Wuhan, China, because of the scars left by the SARS outbreak in 2003, when Hong Kong was the epicentre.

That’s why, Ho said, he and his friends decided early to cancel dinner gatherings and to start wearing masks in public. They weren’t alone; the Metro Vancouver Chinese community largely abandoned dining out by February, prompting local Chinese restaurants to become one the first B.C. sectors to call for government aid in light of COVID-19.

“We have some experience in Hong Kong because of SARS in 2003, so people had a very strong idea of what to do in a pandemic,” Ho said. “Even two months ago, there were people in my WhatsApp group recommending people to prepare by getting more masks. There was a strong sense in the community that the masks are the best protections for people … because the people in Hong Kong knew that something abnormal is happening.”

Chan said the Chinese community’s quick adoption of wearing masks may have stemmed from the experience of having lived in a city like Hong Kong, where more than seven million people are crammed into an area smaller than Metro Vancouver.

“I think it’s more a function of the density of population,” Chan said. “When you look at the recommended two metres for social distancing, that’s just not possible in a city like Hong Kong. So in my chat group with my friends in Hong Kong, they have been urging me to wear a mask since way back in January.”

University of British Columbia (UBC) history professor Henry Yu said wearing masks in public isn’t limited to Chinese Canadians. Yu, who is the principal at UBC’s St. John’s College, said many students from Japan, South Korea and Taiwan voluntarily took up mask wearing long before it was recommended in the West.

“In major Asian cities, when you wear a mask, people say good, you are doing the right thing,” he said. “You would never stigmatize someone for it…. The normative nature of wearing a mask without being stigmatized – that developed very quickly in January and February. You may be wearing a mask because you may think mistakenly that it will protect you. But that doesn’t matter; you are protecting others by not spreading it.

While Yu, Chan and Ho agreed that they hope to see mask use more normalized in Canada after Tam’s recommendations, their opinions differ as to how effective Ottawa’s message will be. Ho, for example, thinks Canadian mainstream views of the masks’ purpose may be too strong to allow widespread adoption even with a federal health recommendation.

“The traditional image of masks – especially the medical applications of masks - is so strong in mainstream society that many people treat the masks as only being worn by those who have disease or those who work with patients,” Ho said. “So to change people’s mindsets that it’s something to be worn everyday when they go out is going to be difficult. And because it isn’t mandatory – it’s an advice from the chief medical officer – people will still view it as not so serious.”

“Up to this point, the idea of wearing a mask is really limited to people in a medical setting, or, if you are wearing it in public, it’s linked with the idea that you are sick,” he said. “That’s where the stigma comes in. The main story now, however, is that you don’t know whether you have it; therefore you have to wear one to protect others, so that may take that stigmatization away from people wearing masks.”

Yu said the way to destigmatize mask wearing “is for everyone to wear masks.”

“In Asia, very quickly, when everyone starts wearing a mask, there’s no more stigma around wearing a mask. The way to create that new norm here is to require everyone to wear one, to not give rise to the idea that, if you wear a mask, you are sick.”

Yu added that during the 1918-19 pandemic, “everybody was wearing masks. This was a time where they didn’t have enough studies on a lot of things, but they wore masks as a default. And that has a lot to do with how fast a norm can switch.”

Metro Vancouver residents report spike in crime during pandemic: poll
Jun 4, 2020 8:43 AM
Comments
We welcome your feedback and encourage you to share your thoughts. We ask that you be respectful of others and their points of view, refrain from personal attacks and stay on topic. To learn about our commenting policies and how we moderate, please read our Community Guidelines.