“Many Chinese immigrants told me they feel like they’re fighting a war on two fronts, and the war still hasn’t ended yet."
May 30, 2020 2:58 PM By: Richmond News 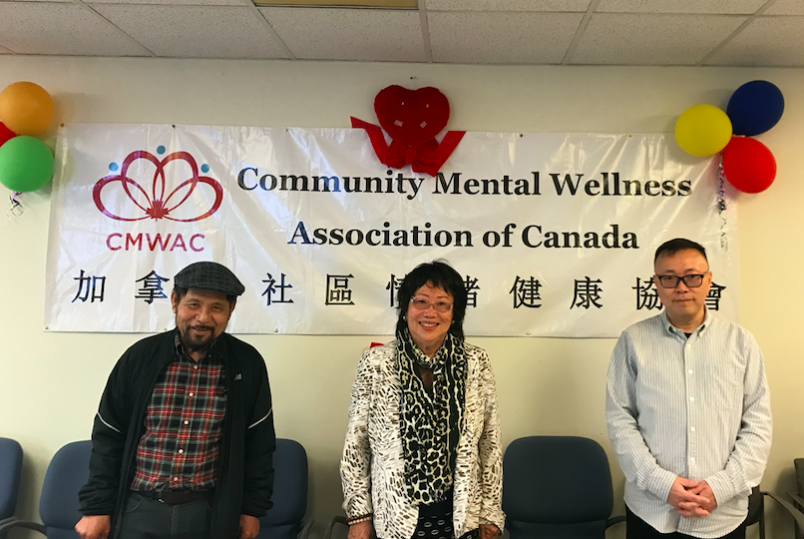 Ahlay Chin (middle) and Ivan Pak (far right) said the Chinese community already faces a mental health crisis but the rise of racism has made it worse. Nono Shen photo

The seemingly never-ending pandemic, combined with a spike in hate crimes targeting Asians has pushed some people in the Chinese community already struggling with mental health to “the tipping point,” said Ahlay Chin, founder of Richmond-based Community Mental Wellness Association of Canada (CMWAC).

“Many Chinese immigrants told me they feel like they’re fighting a war on two fronts, and the war still hasn’t ended yet. The ongoing battle makes them feel their mind has already reached the tipping point,” said Chin, who has spent the past 25 years trying to build a bridge of understanding about mental health within the Asian community.

Some Chinese immigrants have been anxious about their loved ones back home since the coronavirus first infected people in China in December before spreading to Canada, only exacerbating the anxiety.

Ivan Pak, a CMWAC member, recalled seeing a woman who emigrated from Wuhan — the initial epicentre of the outbreak in China — “having tears flowing down her face like a river escaping a dam” while talking to him.

“She was just sitting there crying. The memory is so vivid that we will never forget it. Our first thought was we have to do something,” said Pak, and the team launched a weekly online support group via Zoom one week later.

The online support group has been running smoothly without technical issues for the past nine weeks, but Chin said they still face challenges due to the cultural stigma and sense of losing face many in the Chinese community feel about counselling.

“No matter how hard we try, we always have more people listening than sharing their feelings during the online meeting. However, many texts flow into our phones to ask for mental health support after ending the session.

“In Chinese culture, we are told to not wash our dirty linen in public. This makes more people tend to hide their negative or unpleasant emotions inside,” said Chin.

Meanwhile, the rise of racism in B.C. creates an additional concern — many immigrants feel hesitant to leave their homes due to fears that they might get attacked.

“The xenophobia creates mental health issues. I have received requests from people asking me what they should do if someone yells at them, ‘Go back home!’ They are always worried about their safety every time they go out,” said Pak, noting that the fear of experiencing racism is real.

Pak encourages immigrants to reach out for support from family members, friends and community support groups so as to not feel so alone. Although, he found some are more reluctant to share their fears with people who are non-Asian.

“Local support groups might need to adopt a different cultural approach while helping immigrants. But considering the language barrier, it’s going to be very hard,” said Pak.
Pak still hopes people will speak up if they see something bad happening in the community.

“People from various backgrounds should come together to fight racism. We all need to care about it even if some of us haven’t personally experienced it yet.

“And for people who feel depressed, anxious or have problems with family members, we want to say we are here. Please don’t feel shy to ask for help,” said Pak.