The group was there to protest what they are calling a “crisis of renovictions” and a dwindling number of DIY spaces — independent, artist-run studios, music venues and collective exhibition spaces — in the city.

More than 18 different spaces have been renovicted from properties owned by Wilson’s company, Low Tide Properties, in the last two years, said Nathan Drillot, one of the event organizers.

“Obviously Low Tide isn’t the only source of gentrification in Vancouver but considering that there’s now been over 18 different spaces that have been renovicted by them we think that’s significant so we wanted to bring more attention to it,” he told the Courier.

Drillot ran INDEX, along with Patrick Campbell, out of a Low Tide building near the port on Powell Street, for about six years before closing in June.

Stalled lease negotiations, a lack of communication and rent increases were the death knell for INDEX along with Merge, a similar type of space run by Juno-Award winning musician Stephen Lyons and a handful of others out of the same building.

Drillot said the first high-profile renoviction in the DIY arts community came about two years ago when Red Gate Art Society had to move from East Hastings to Main Street after a 150 per cent rent increase at another Low Tide building.

“I was able to book, pay and give spotlight to these young emerging artists in these spaces and it was taken away from us because Chip Wilson bought the building and felt that he wanted to make more money off it,” she said.

Overland said many of the buildings will sit empty for years while artists and musicians struggle to find affordable spaces to create and perform in the city.

“It just feels hopeless at this point,” she said, adding that of the six spaces she used to books events for, only two are still open. And one of those is also likely to close soon.

The timing of Saturday’s event was not an accident. The protest was held at the same time as the Mount Pleasant Street Party — the grand finale of the annual Vancouver Mural Festival, which gets support from Wilson and Low Tide Properties, and other real estate development companies. Something Drillot and Overland called “art washing.” 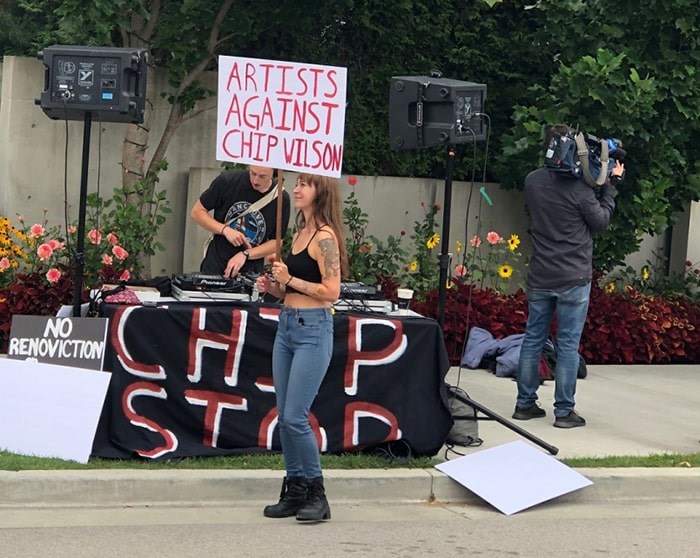 “I have many friends who are artists who take part in it and I can understand why individual artists would want to take part in it because it’s hard enough to make it financially as an artist in this extremely expensive city so I can see why they’d want to take part,” Drillot said. “That said, I think that the corporations that are funding these events are not doing it just out of the goodness of their hearts, they’re doing it because it helps increase property values and gentrify neighbourhoods they want to make a profit out of.”

Wilson came out briefly before Saturday’s event started to speak to some of the protestors, including Drillot and Overland.

“I didn’t get here without making a lot of mistakes and having failed many times,” he said. “And many times I couldn’t make rent because I didn’t have a product that people actually wanted to buy.”

In the exchange, which lasted a few minutes, Drillot pointed out that his venture was successful.

In addition to Saturday’s event, which included speeches from Vancouver city Coun. Jean Swanson and Rocco Trigueros, a member of the Vancouver Tenants Union steering committee and COPE, Overland and Speck penned an open letter to Wilson and Low Tide Properties, that has garnered more than 500 signatures online.

“Chip Wilson is one man who is wealthy because he has profited off the backs of his workers,” it reads. “He does not get to decide what our city should look like, or who should own most of the property within it. He does not get to put up artificial barriers to building community or turn Vancouver into an exclusive gated enclave, open to no one but the wealthy.”