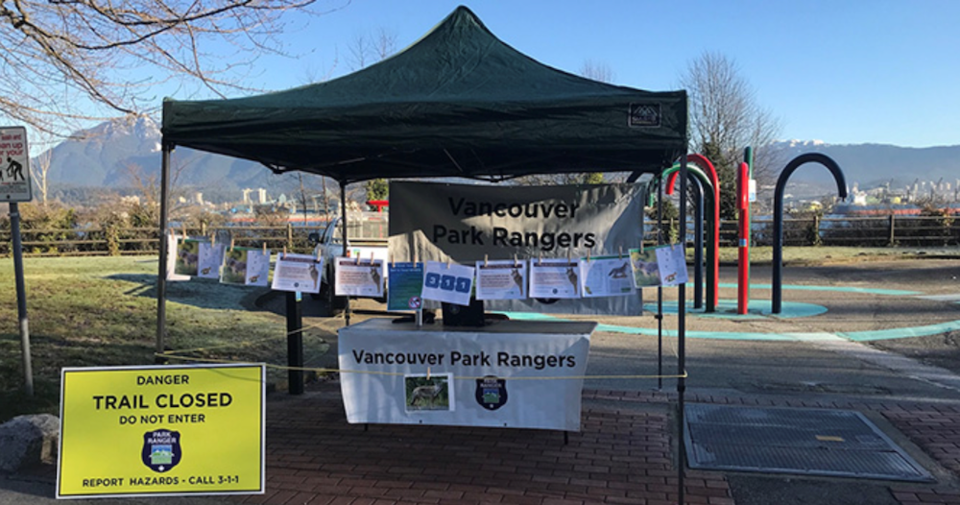 Following more reports of coyotes in Vancouver's Stanley Park chasing and 'nipping' at joggers and cyclists, the City of Vancouver's Board of Parks and Recreation on Friday launched a public education campaign aimed at informing the public about co-existing with these wild canines.

About a dozen coyotes reportedly call the park home. Though the animals are naturally scared of humans, coyotes tend to become bold and aggressive when fed by people, the city explained in a Jan 22 news release posted to its website.

This week, park rangers opted to close trails in Stanley Park's Brockton Oval and Hollow Tree area, near Prospect Point, for the second time in as many weeks due to reports of coyotes behaving aggressively. "Unfortunately, people are removing the barriers or walking around them and continuing on the trails," Park Board staff explained in the release.

Two more people were chased by coyotes Thursday night, one of whom was bitten. The woman was jogging in the Hollow Tree area on the west side of Stanley park when a coyote bit her  at approximately 5 p.m.

"The force of the incident caused her to fall over," BC Conservation officers explained in a Facebook post. The woman reportedly sought treatment in hospital, and was released.

The pair join a total of around 13 people who have reported being chased by coyotes in Stanley Park in recent weeks. Members of the BC Conservation Officer Service are now working to find and capture the animal involved in the latest aggressive incidents, according to the release.

As part of the coyote education campaign, visitors to Stanley Park can expect to see park rangers stationed at a booth near Lumberman’s Arch throughout the next two weeks, doling out educational materials from the Stanley Park Ecology Society.

These rangers will be advising park users about the importance of refraining from feeding coyotes or any other wildlife.

"Wildlife feeding is a significant issue in our parks, which has impacts to wildlife health and behaviour. It breaks down our healthy boundary with wildlife and can lead to aggressive animal behaviour towards people," reads the release.

"And, please, respect barriers rangers have installed in the park."

'Without direct intervention by City and Park Board, more park visitors will come into conflict with wildlife, and the animals who call the park home will be killed'

On the same day the Park Board announced its new public education campaign, Canadian animal-rights charity The Fur-Bearers sent an open letter to all seven commissioners of the Vancouver Park Board, asking the City of Vancouver to take several steps aimed at reducing conflict between humans and coyotes in Stanley Park.

"In recent weeks, we have watched with sadness and distress the reports of negative interactions between visitors to the park and coyotes who call the park home, which as you know, has led to the killing of two coyotes," the letter reads.

"ll parties involved agree that the primary driver behind this change in coyote behaviour is both indirect and direct feeding of coyotes (and other wildlife) by people ... without direct intervention by City and Park Board, more park visitors will come into conflict with wildlife, and the animals who call the park home will be killed. This cycle will continue endlessly until the root cause of the issue – feeding – is addressed effectively."

The letter, signed by executive director Lesley Fox, continues on to request that the City of Vancouver invest in "Highly visible, multilingual and graphic-based signage" that spells out the consequences of feeding wildlife to both humans and animals. It also challenges the city to upgrade its current open-topped waste bins to wildlife-resistant receptacles, and to commit to enforcing by-laws related to feeding in Stanley Park.

What do you do if you encounter an aggressive coyote?

If you do happen to find yourself confronted by a coyote in the wild, you should remain calm and avoid running—coyotes instinctively chase anything (or anyone) that runs away from them. Instead, experts recommending standing tall, holding your arms overhead and yelling at the animal.

"Scaring coyotes helps modify their behaviour and restore a healthy boundary between them and people," park board staff explain in the release.

Any coyote sightings should be reported to the City of Vancouver's 3-1-1 line. If you witness a coyote behaving aggressively, you can report the encounter to the BC Conservation Officer Service Report All Poachers and Polluters (RAPP) line at 1-877-952-7277 and 3-1-1.