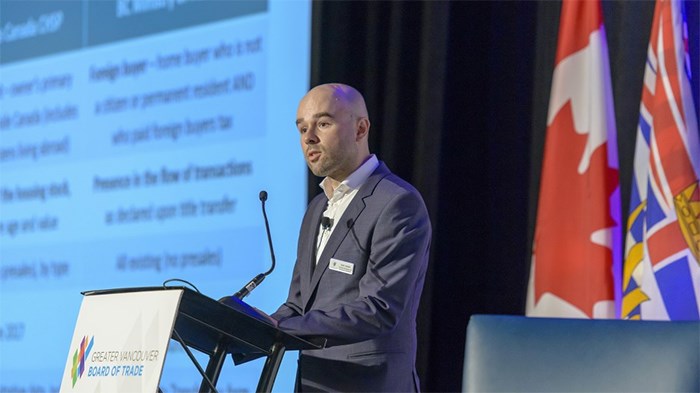 Eric Bond, market analysis principal with Canada Mortgage and Housing Corp.: “We do not know, concretely, what the impact of foreign capital has been on the Vancouver housing market” | Submitted

A lead analyst for Canada Mortgage and Housing Corp. (CMHC) made a startling admission to a developer-packed conference in Vancouver May 25 regarding the impact of foreign capital on the Metro residential market.

“We don’t know,” Eric Bond, CMHC market analysis principal, told the Greater Vancouver Board of Trade’s Housing Forum 2018, despite an intense focus on the role of foreign buyers in the Metro housing market by Statistics Canada and B.C.’s Ministry of Finance over the past two years.

“We do not know, concretely, what the impact of foreign capital has been on the Vancouver housing market,” Bond said. “Anyone claiming otherwise, whether they are claiming it is a big deal or not a big deal, is stating an opinion [because] we do not currently have the data to answer that question.”

Bond, a key member of a forum panel on the impact of foreign investment, added that foreign capital flows into real estate in Canada “are not tracked and until we have data on that and where it is going, it is very difficult to determine” its impact.

Bond repeated CMHC’s controversial 2017 finding that only 4.8% of Metro Vancouver homes were owned by foreign nationals, but he added that number might be rising quickly, especially in the condominium market.

Since 2016, the share of new condominiums pre-sold to foreign buyers has reached 19% in Vancouver and accounts for 24% of all buyers in Richmond and 23% in Coquitlam, Bond said.

If Bond had walked the floor at the forum he might have garnered an idea of the scope and impact of foreign capital flowing into Metro Vancouver’s residential market.

Two Vancouver development companies, Aoyuan Property Group of Hong Kong and Landa Global Properties Ltd., which has mainland Chinese funding, are among the foreign capital conduits, according to Mehdi Shokri, an investment principal with Avison Young of Vancouver.

Landa has bought residential development sites in East Vancouver, on the west side of Vancouver and in Richmond over the past three years.

Aoyuan is more active locally in Burnaby, but it is also investing in Toronto’s residential land development.

Belford Properties, which is also backed by Chinese capital, is a major residential and commercial developer in Burnaby’s Metrotown area.

Recently it was disclosed that the redevelopment of the Oakridge transit centre is being led by China’s Modern Green Development Corp. and Kunyuan International Group, a company linked to China-based capital. The Oakridge site was sold for $440 million in 2016 and is zoned for 1.26 million square feet of residential.

Land bought for residential development is not subject to B.C.’s 20% foreign-buyer tax.