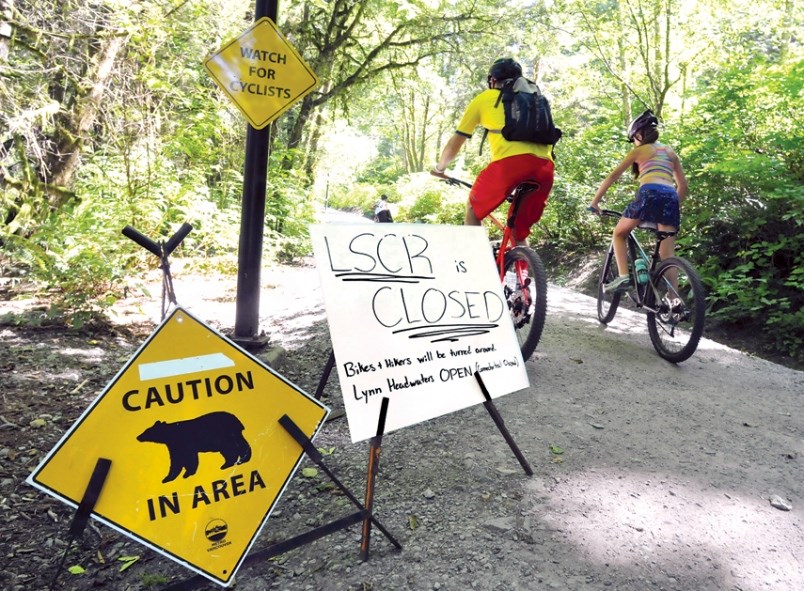 North Vancouver's Lower Seymour Conservation Reserve remains closed to the public and conservation officers are still patrolling the area after a 10-year-old girl was bitten by a black bear Friday while walking on a trail with her family.

Metro Vancouver will also close Lynn Headwaters Regional Park Tuesday at 7 a.m. after getting word that the bear may now been in that area.

The incident with the bear happened at about 3 p.m. as the family of two children and a parent was walking on the trail around Rice Lake, said Inspector Murray Smith of the Conservation Officer Service.

Smith said the family stopped when they saw the bear on the trail and the adult and another passerby tried to scare it away by making noise. But instead of running away, the bear kept approaching and bit the girl on the leg, puncturing her skin.

The girl was taken to hospital for treatment and is expected to make a full recovery, said Smith.

Smith said a bear biting a human like that is “quite uncommon.”

Usually the presence of people making noise “should be enough to scare bears away,” said Smith.

“This is a bear that has lost its fear of people and is human habituated,” he said.

Smith added the family did not have food out while they were on their walk. But he said it’s very likely the bear has learned in the past that humans can be sources of food.

“I would speculate the bear has been in the area for some time,” he said. “It’s become very comfortable with people.”

Smith said the description of the bear indicates it is likely a young bear about two to three years old.

He added there were reports of a similar-sized bear on the trails near Rice Lake last year that also did not appear fazed by the presence of people – which was very possibly the same bear, he said.

Metro Vancouver closed the park Friday and a team of conservation officers set up two live bear traps and began searching for the bear. As many as 12 officers have been involved in the search, said Smith, but so far the bear hasn’t been spotted.

Luci Cadman of the North Shore Black Bear Society said people who behave badly around bears on the North Shore – getting too close while trying to get photos or leaving food unattended – may have contributed to potential problems.

Recently a resident who lives near Capilano Regional Park in North Vancouver reported seeing a group of about 20 people chasing a young bear while trying to get a photograph, she said.

Families have also been spotted setting up their picnics and barbecues in local parks, then walking to another part of those parks and leaving their food unattended, she said.

Cadman added because so many indoor activities are closed, “there are many more people spending time in the parks” which may result in bears being pushed out of their usual territories.

In some cases people also allow their dogs to be off-leash even in areas where dogs are supposed to be on-leash, she said, which can often have the effect of chasing bears out of the forest.

Smith said it’s not clear yet how long the park will remain closed.

If the bear is found, it will have to be destroyed, he said.

“We can’t take a chance of relocating a bear that is not scared of people.”

If anyone does encounter a bear on the trail, Smith said the best advice is to make yourself look big and speak firmly and loudly to the bear – to show that you are human - while backing away slowly. If the bear continues to approach, drop something – like a hat or a jacket – to distract it long enough to give you space to get to safety.

Most important, “Do not run away,” he said.