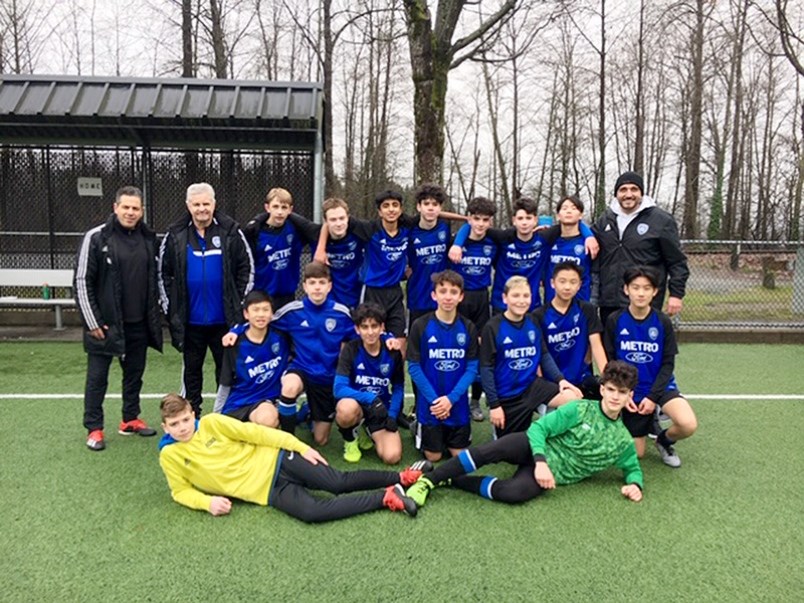 The Coquitlam Metro Ford Lazio U15 team was supposed to be embarking on the trip of a lifetime on Wednesday to play exhibition matches in England and Italy, but its plans have been scuttled by the coronavirus crisis. Photo submitted

Giovanni Gasbarro’s U15 Coquitlam Metro Ford Lazio soccer team is supposed to be embarking on the trip of a lifetime Wednesday to England and Italy.

Instead, the players on the first division team he coaches will be running drills at a local pitch to prepare for the first round of Coastal Cup playdowns, which begin April 4, after the team’s 17-day soccer and cultural tour was cancelled because of the COVID-19 crisis.

Gasbarro said he’s scrambling to recoup as much of the $100,000 the trip was costing the team as he can, but with the scale of the pandemic and resulting travel restrictions changing almost hourly, it’s proving a frustrating experience.

The trip, which was to include exhibition matches against academy teams from Stoke City and Inter-Milan, as well as opportunities to attend a Premier League match between Manchester City and Burnley on Saturday, tour Milan’s massive San Siro stadium, and visit cultural sites in Pisa, Verona, Florence and Rome, has been in the works for two years.

“This was going to be a unique trip,” Gasbarro said, adding the team’s 15 players and their parents were busy fundraising during that time to help offset costs.

Those efforts, which netted about $10,000, included raffles, bottle drives, pub nights, garage and yard sales, fence painting and chocolate sales. Sponsors kicked in another $8,000. The rest, to cover the cost of flights, accommodation, ground transportation and admission tickets, is coming out of families’ pockets.

Gasbarro said the travel agency with which he has been working, Burnaby's Personal Travel Management, has so far managed to secure about $50,000 in refunds and credits. But other refunds, like 75% of the team’s hotel expenses in Italy and airline cancellation fees, are proving more problematic to secure.

Jenny Revesz, a senior travel consultant at Personal Travel Management, said the company is working on the team’s behalf to recoup its money but negotiations with various vendors have been complicated because Gasbarro made the decision to cancel the trip before travel restrictions to countries like Italy had been put in place, and there’s no such restrictions in England yet.

“When you decide to pull the plug, you’re subject to everybody’s penalty,” Revesz said.

But she noted with the situation evolving so quickly, policies on things like cancellation fees can change at a moment’s notice.

“This is all brand new for everybody,” Revesz said. “Nobody knows what will happen.”

Gasbarro said he decided to cancel the trip in late February when he started hearing from his contacts in Italy about local travel restrictions in Venice and Milan.

“We monitored the situation but we tried to stay positive,” he said, adding the team understands it will take a hit on some costs, like the tickets to the soccer match.

Gasbarro said the credits will help the team realize its dream trip next year instead, when it hopes to participate in the Gallini World Cup, Italy’s largest international youth soccer tournament, which is held every April in Pordenone, near Venice.

But that’s little consolation for players who may not be with the team then.

“The players are devastated,” Gasbarro said. “They were looking forward to it.”

• Coquitlam Metro Ford Lazio team has started a GoFundMe page to try to make up the difference in money it won’t be able to recoup from the cancellation of its trip and to jumpstart its efforts to take its European tour next year.