More than a dozen SD43 teachers and staff took up singer Jon Bon Jovi’s challenge to write a verse about their lives under COVID-19.
Apr 16, 2020 1:33 PM By: Diane Strandberg 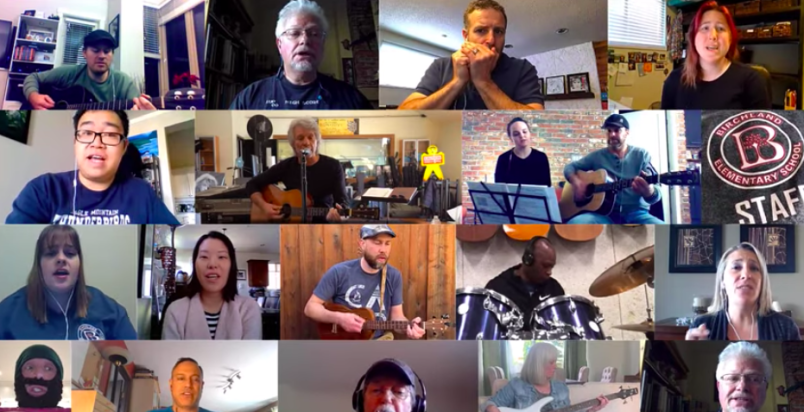 SD43 staff make up a verse and sing it for Jon Bon Jovi's challenge to share COVID-19 stories. The song was posted to YouTube yesterday and already has more than 3,000 views. | SCREENSHOT/ YOUTUBE

School District 43 teachers and staff have taken up singer Jon Bon Jovi’s challenge to write a verse about their lives under COVID-19 with a harmonic Bon Jovi tune posted to YouTube.

The song, known as Do What You Can, is entwined with Bon Jovi’s plea to write a verse and share it. More than a dozen teachers took part singing, strumming acoustic and electric guitars, banging drums and even riffing on a harmonica.

Teacher Rob Heinrichs introduces the song, encouraging people to help out during these trying times because if they can’t do what they do, they should “do what you can.”

Jon Bon Jovi appeared on The Tonight Show Starring Jimmy Fallon on March 30 from his home studio in New Jersey.

Bon Jovi gave an update on his family, and said he got "thousands of submissions" from fans after asking them for help finishing the song.

Now SD43 teachers are hoping to add to his collection of verses.

In their version, the teachers note that people are staying indoors, the border has shut down and teachers won’t give up: “We’ll do our best to teach kids online,” they sing.

The song was posted yesterday, April 14, and already been viewed more than 3,000 times.