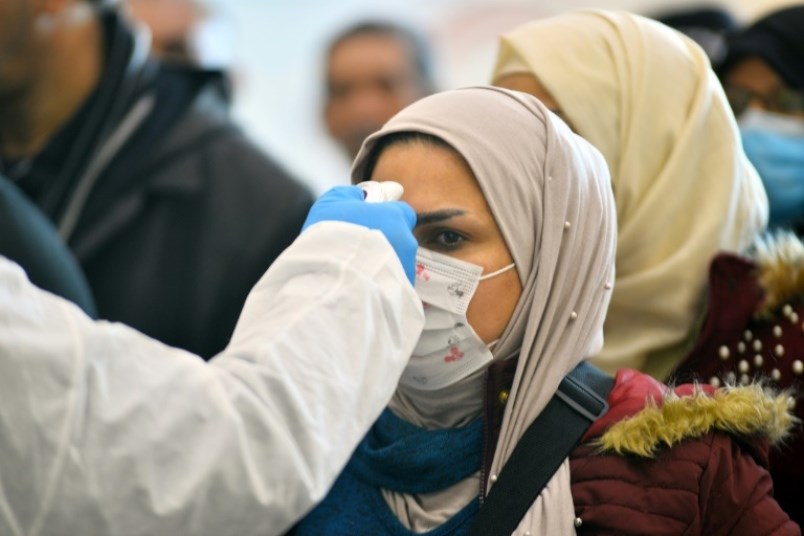 An Iraqi woman's temperature is taken upon her return from Iran at the Najaf International Airport on February 21. Photo via Richmond News

A member of Richmond’s Iranian community has said the coronavirus situation in his homeland is much worse than is being reported by officials.

The man, who asked not to be named, said relatives back home believe the death toll from the virus (COVID-19) in Iran to be more than 100, markedly more than the 12 being reported by the country’s government.

Iran appeared on B.C.’s COVID-19 radar last week after a woman in her 30s – from the Fraser Health region - was confirmed as the province’s sixth case, after spending some time recently in Iran.

B.C.’s seventh case was confirmed Monday morning, a man in his 40s, who had been in close contact with the sixth case when she returned home.

“There are different groups giving out very different information,” said the Iranian Richmond resident, adding that some of the news is from relatives and some via social media.

“We’re hearing stories of people getting refused entry to hospitals, being told they’re fine and then dying.

“We’re being told that the Iranian government didn’t want to scare people and stop them from participating in the national elections last week.”

Iran's government said Monday that 12 people had died nationwide from COVID-19, rejecting claims of a much higher death toll by a lawmaker from the city of Qom that has been at the epicentre of the virus in the country.

The conflicting reports raised questions about the Iranian government’s transparency concerning the scale of the outbreak.

Iran's Health Ministry said the total number of infections have risen to 61 while deaths stood at 12.

But a lawmaker from Qom, Ahmad Amirabadi Farahani, was quoted by the semi-official ILNA news agency as saying that the death toll was 50.

The Richmond resident said that, because of all the conflicts in Iran, “they don’t have enough chemicals to sanitize the hospitals properly.

“Last night, we were reading that more than 100 have died and Iraq has closed all their borders with Iran. No one else has. It’s crazy.

“Most of my close family still lives in Iran. They’re being told not to go to their places of worship.”

The man said he has no idea where B.C.’s sixth case lives and he hasn’t heard much chatter about it in the local Iranian community.

“It only just happened the other day, so there hasn’t been time for us to get a real sense of how the Iranian community is reacting to it,” he added.

He’s also interested in how the local Iranian community will react to the latest news, given that the Persian New Year is fast approaching on the first day of spring.

“There is going to be so many public gatherings before and during the celebration,” he said.

Even with Iran’s lower official death toll of 12, the number of deaths compared to the number of confirmed infections from the virus is higher in Iran than in any other country, including China and South Korea, where the outbreak is far more widespread.

The World Health Organization (WHO) said last week that in 2 per cent of infected cases, the virus has been fatal.

In Iran, according to the official figures, the death toll represents nearly 20 per cent of total infections.

There are concerns that clusters of the new coronavirus in Iran, as well as in Italy and South Korea, could signal a serious new stage in its global spread.

Authorities in Iraq and Afghanistan, which closed their borders with Iran, announced their first confirmed coronavirus cases on Monday.

Kuwait, Bahrain and Oman also announced their first cases. In all five countries, the infected patients had links with Iran.