Millions of dollars of drug-laced cash were routinely emptied from suitcases onto the floors of a nondescript Richmond office, to be counted by Caixuan Qin and her partner Jian Jun Zhu, for the purposes of money laundering.
0
Jan 10, 2019 3:49 PM By: Graeme Wood

Millions of dollars of drug-laced cash were routinely emptied from suitcases onto the floors of a nondescript Richmond office, to be counted by Caixuan Qin and her partner Jian Jun Zhu, for the purposes of money laundering, according to allegations documented by B.C.’s director of civil forfeiture. 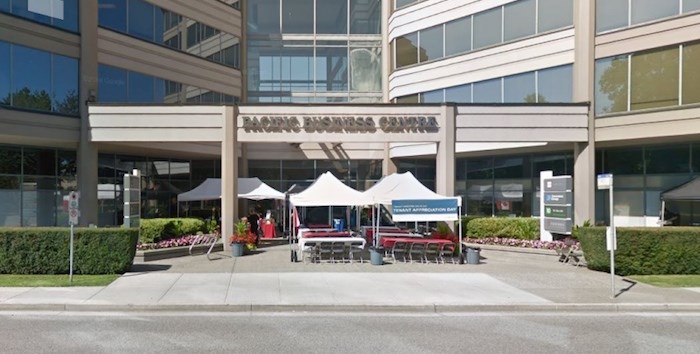 Silver International was based out of this business centre at 5811 Cooney Road. Google Maps

But a number of Qin’s assets are still tied up by authorities, including a $2.3 million Vancouver home; about $2.1 million in cash; $17,800 in playing chips from the River Rock casino; jewelry; and about $10,000 in gift cards.

The director is seeking to claim these assets, as proceeds of crime, from Qin, the director of Silver International and owner of the home at 2375 Burquitlam Drive in Vancouver. Her spouse or partner, Zhu, is said to be the “operating mind” of the scheme, which was estimated by the director to be a $220 million per year operation.

On Wednesday a BC Supreme Court judge in Victoria extended an interim preservation order, meaning the assets will remain frozen until a hearing February 9 in Vancouver.

“We are presently preparing our response to the civil forfeiture action,” said Qin’s lawyer, Matthew Nathanson.

“We intend to litigate this case in court, not the media. However, until that occurs, it is important to keep in mind that none of the assertions made by the director of civil forfeiture have been proven. None of them have been tested in any way. They should not be reported as proven facts, because they are not. The only real fact at this point is that all charges against my clients were stayed,” he added via email.

Money laundering via B.C. casinos has made national headlines of late and is the subject of a review by B.C.’s Attorney General David Eby. The government is also probing how money laundering has affected Vancouver’s astronomical rise in property value over the past decade.

The Vancouver Sun and Global News have reported how the now defunct police investigation dubbed E-Pirate had tied money laundering to the fentanyl trade, which has led to a public health emergency.

The man who is said to have led police to Silver International is Paul King Jin, who was being tracked by the Federal Serious and Organized Crime team starting in April 2015. According to the director, Project E-Pirate coincided with a Vancouver Police investigation dubbed Project Trunkline, whose targets – with links to Mexican drug cartels and Chinese Triads – were also using Silver International.

At the time, the director notes, Silver International was not registered as a money service business under the Proceeds of Crime (Money Laundering) and Terrorist Financing Act or Financial Transactions and Reports Analysis Centre of Canada. It was found to have no known customer profiles on record inside the office.

Extrapolating data from 137 days of transactions, the director estimated about $220 million was flowing through Silver International in 2015. One of its more significant days of transactions was September 30, 2015, when $2.8 million was deposited. The director alleges drug-contaminated cash was routinely counted on floors of the main room as Qin and Zhu manned the ledgers, after picking up luggage bags full of cash that were dropped off in the parking lot of the Pacific Business Centre at 5811 Cooney Road. Clients appeared to be regulars, buzzing in and out of the office while the main secure room was often left unlocked.

Silver International client Maxim Poon (“Nelson”) Wong was under the eyes of Trunkline and also recorded in RCMP databases as being a Triad associate and associated with the “Yellow Triangle Boys,” claimed the director.

Despite charges being brought forth, on November 22, 2018, a stay of proceedings was entered with respect to all charges against Qin, Zhu and Silver International.

Global News reported this week a confidential informant may have been identifiable in evidence submissions and the risks were too grave to proceed.

On November 26, 2018, the defendants filed an application to the court to have their assets returned under Section 8 of the Charter of Rights and Freedom (the right to be secure against unreasonable search and seizure). The application was dismissed by a judge on December 12 but the defendants were given the opportunity to reapply by December 28. The director delayed that opportunity until January 10 by successfully applying for an interim preservation order, which, again, was extended.

The director is able to seize property under the Civil Forfeiture Act by way of arguing the balance of probabilities property is proceeds of crime, even if there is no criminal conviction.