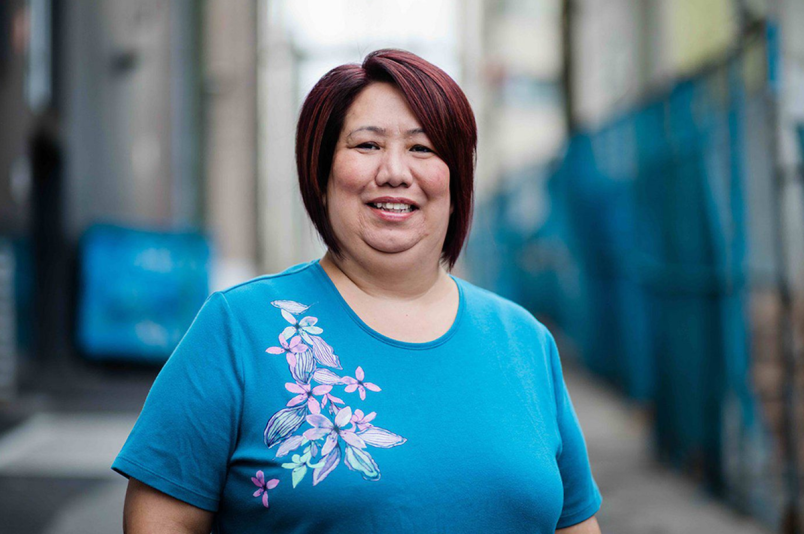 At first, Jennifer Allan put her symptoms down to the wildfire smoke that blanketed Vancouver during the third week of September.

She had a sore throat, a cough, stinging eyes, and most concerning of all, chest pains.

She went to one doctor who treated her breathing problems related to the smoke but didn’t test her for  COVID-19. When her symptoms didn’t go away, she went to a different clinic.

On Sept. 20, Allan learned she had tested positive for COVID-19.

“It took maybe half an hour to take it in,” said Allan, who lives and works in the Downtown Eastside.

“And I started to panic… I  was like, ‘Oh, my God, this is COVID, this is COVID.’ And then I calmed  myself down and I said: ‘All the symptoms you have are no different than  a head cold, except for the ongoing chest pain and fever.’”

It was the start of a three-week ordeal for  Allan, who mostly recovered at home but experienced excruciating chest pains and was hospitalized for short periods three times in the COVID-19  wards at Vancouver General and St. Paul’s hospitals.

“It felt like someone was punching me in the chest and trying to rip my heart out,” Allan said. “I’ve never felt anything that excruciating in my life.”

On Friday, she was finally deemed to be fully recovered by Vancouver Coastal Health nurses.

Allan is an assistant pastor at Vancouver Street Church, and she also does overdose prevention work with Washington Needle Depot and Spikes on Bikes. Her church outreach efforts  include travelling through the back alleys of the Downtown Eastside  late at night, handing out snacks and reversing overdoses.

On Sept. 22, Vancouver Coastal Health posted a notice warning people they may have been exposed at Vancouver  Street Church on Sept. 11, 13 and 18. Allan also notified the Union Gospel Mission,  which operates the building where she lives. That building, at 601 E. Hastings, includes a shelter, independent-living housing, a drug and alcohol treatment space and second-stage housing for people leaving treatment.

UGM staff supported Allan throughout her illness, serving her meals, helping her stay isolated from other residents and calling an ambulance for her when she needed to go to hospital. Vancouver Coastal Health nurses were in daily contact to monitor her symptoms, Allan said.

One other person living at 601 E. Hastings has tested positive for COVID-19, and two people are self-isolating as a  precaution, according to UGM’s website.

Up until late August, COVID-19 cases in the  Downtown Eastside were rare and it was thought that the neighbourhood had been spared from an outbreak. Many local residents live in poverty and have multiple health conditions, so there was concern about the illness spreading in the neighbourhood.

Instead of COVID-19 cases, overdose deaths spiked, and more people became homeless because of COVID-19  restrictions. Some drop-in spaces closed, and many housing providers banned or restricted visitors.

But since the beginning of September, COVID-19 cases have been increasing in the neighbourhood. Positive cases have been reported among staff and residents of several supportive housing buildings, a shelter and the West Pub.

The largest housing providers are seeing several cases a week. Janice Abbott, CEO of Atira Women’s Resource  Society, said there are three to four positive cases every week across the hundreds of housing units Atira runs. Tanya Fader, director of housing for PHS Community Services Society, said there have been  “scattered” cases — around one or two per week — but no large outbreaks.

Allan wants people to know  COVID-19 is real and made her very sick. One night, she was unable to  get her fever to go down, despite taking dose after dose of extra-strength Tylenol, sitting in front of a fan and wetting her T-shirt  down.

At another point she was having chest pains  but was reluctant to have an ambulance called — a legacy, Allan said, of being Indigenous and being taught to not “make a fuss.” Instead, she insisted that UGM staff call the non-emergency line.

“As an Indigenous person, we’re taught to not bother people — don’t bother the health authorities, don’t waste their time,” said Allan, who is Tlingit.

Allan said she mostly got good treatment at  the hospitals, but had a hard time getting timely access to her epilepsy medication, and this meant she experienced more seizures than  usual.

Allan said many Indigenous people feel nervous about going to hospitals because of cases like the death of Joyce Echaquan, an Indigenous woman who recorded racist comments directed at her by nurses at a Quebec hospital before she died.

An investigation into anti-Indigenous racism in B.C.’s health-care system was launched  in July in B.C. after reports hospital staff were playing a racist  “guessing game” about blood alcohol levels of Indigenous patients.

Allan said she had experienced racism in the health system in the past, leading her to be very reluctant to call paramedics.

She said there were times during her illness when she would start feeling better and do something like go for a short walk or clean her apartment — and then her fever would spike again.

“I was thinking, ‘OK, well, if you just  don’t act sick, if you just think you’re getting better, you’ll get  better, right?’” Allan said. “Like it’s mind over matter because that’s how I think. But that’s not what happened.”

Before she got sick, Allan said she was reluctant to wear a mask. Now, she wears one all the time.

Allan is worried that people who live o  the street will be reluctant to get tested for COVID-19, won’t know  where to go or will distrust health-care workers. She thinks more of an effort needs to be made to reach out to marginalized people. For  instance, Allan suggested, perhaps COVID-19 testing could be offered  alongside drug testing sites or overdose prevention sites.

Throughout her bout with COVID-19, Allan documented everything on Facebook and said she recently had two women reach out to her to ask where to get tested.

Vancouver Coastal Health has a testing site open at 429 Alexander St., and is also doing mobile testing, according to the health authority. The health authority says it does more testing in the Downtown Eastside than in other parts of the region, which makes it possible to quickly identify new cases.

Fader said PHS had recently partnered with  Vancouver Coastal Health to go to Strathcona Park, where a large tent city is located, to offer mobile testing to people living in the camp.

The health authority says it has specific measures to help people who are homeless or precariously housed who test positive. “This includes providing supportive housing for people who are required to self-isolate but are not able to do so safely on their own,” it says.

Jen St. Denis is a Local Journalism Initiative reporter with The Tyee, where this article first appeared.