Meet the cyclist squad saving lives in the Downtown Eastside 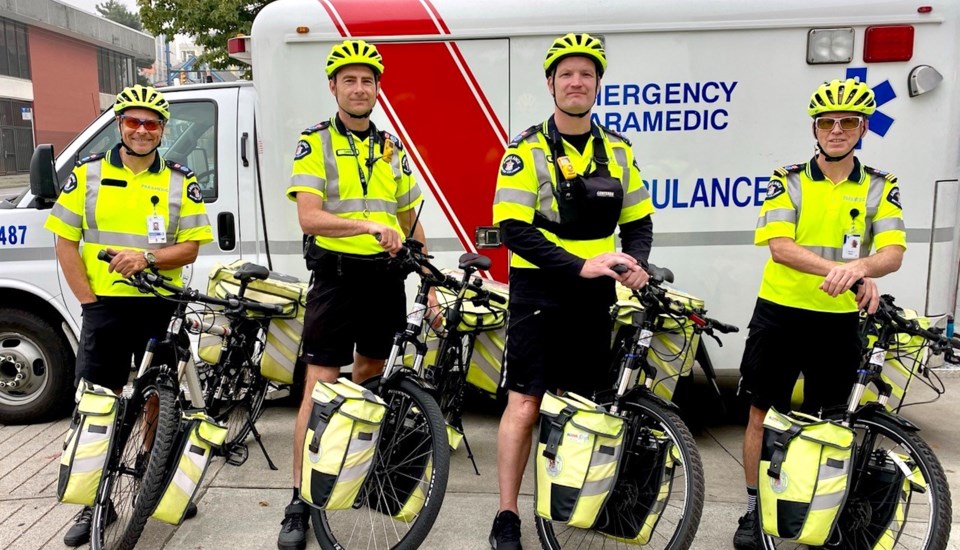 After nearly a year away from their bicycles, four Downtown Eastside paramedics have returned to two wheels.

Calls they responded to covered almost 20 per cent of Vancouver overdose calls in that same timespan, said BCEHS paramedic Darren Metta, one of the riders.

The 50-year-old gears up at 9 a.m. four days a week for a 45-kilometre ride that sees him and his partner work to save lives 11 hours straight.

For people in the DTES community, Bike Squad members offer a friendly face without the attention that ambulance sirens draw to a person suffering a medical emergency.

“We get flagged down a lot,” Metta elaborated.

“People walk up to us. A lot of times they don’t have access to a phone and tell us about someone nearby who ‘doesn’t look so good’,” he said.

It’s been four years since the BCEHS program first touched down in the neighbourhood.

Last year, from May 1 to Oct. 31, the team prevented 1,064 ambulance calls in downtown Vancouver due to their on-scene care.

Our #paramedic Bike Squad, after a COVID hiatus, is back on the streets of downtown #Vancouver. The Squad navigates congested areas quickly, provides rapid #emergency care to patients and can even reduce the need for #ambulance transport. If you see them, please wave hello! pic.twitter.com/PhANk82oPT

This year, the COVID-19 pandemic has posed a unique challenge to the paramedics, who work to dismount their bicycles at a safe social distance while being approached for help.

For every call, the paramedics don personal protective gear including a face shield, mask, and gloves. When there is a suspected COVID-19 case, the attendants wear a full-body gown.

“A lot of times we can get to the scene first,” Metta explained, as bikes can navigate congested areas and arrive at the patient's side faster than a traditional ambulance.

“It often reduces the time it takes for the person to get treated.”

“We also carry all the same medical equipment inside an ambulance, except for the stretcher,” Metta remarked.

The gear adds an extra 50 pounds to their mountain bikes, which are fitted with purpose-built panniers.

Though it's not always an easy job, Metta said it is a deeply rewarding one.

As a paramedic for the last 20 years, he has preferred interacting with the DTES community from the seat of his bike.

The BCEHS Bike Squad will be deployed until Oct. 31 as one of the several fleets in communities around B.C., including the Vancouver International Airport.

Arrest made in stabbing death of Vancouver overdose prevention site worker
Aug 14, 2020 12:58 PM
Comments
We welcome your feedback and encourage you to share your thoughts. We ask that you be respectful of others and their points of view, refrain from personal attacks and stay on topic. To learn about our commenting policies and how we moderate, please read our Community Guidelines.