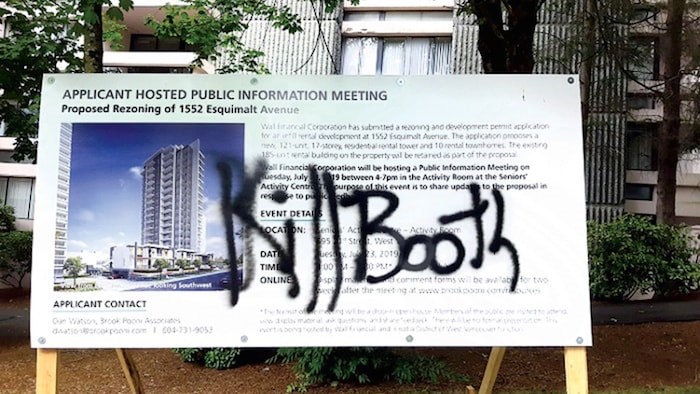 Residents first noticed the graffiti at 1552 Esquimalt Ave. on July 31 and called police. The three signboards on the north, south and east side of the property, which declare intention to seek rezoning for a new tower at the site, were emblazoned with the messages “Kill Booth” and “Kill council.”

“There’s a big difference between defacing property and uttering threats ­ in this case, death threats towards a person or group of people. We take these very seriously,” said Const. Kevin Goodmurphy, West Vancouver police spokesman.

The messages were removed immediately, but now police are looking for the suspects.

“We’ve since canvassed the area for any surveillance footage or any witnesses that would have seen anyone responsible, or anyone that’s out of place in the area,” Goodmurphy said. “They’re knocking on doors, getting ahold of apartment managers in that area.”

Investigators believe that the incident took place between July 30 at 3 p.m. and July 31 at 7 a.m.

“Everyone here is a little bit emotional. We’re saddened by these threats, which are quite extreme. There is no place for threats like this. It’s just unacceptable,” she said. “Against anybody, whether it’s an elected official or a regular citizen in our community. It’s a serious, an extreme thing. … Think about if you saw your name up against that word.”

Goodmurphy said it appears to be an isolated incident and that no other direct threats have been made. Police have spoken with all members of council and the mayor and have done a threat assessment.

“We’re covering all our bases and making sure everybody is as safe as we can make them while this investigation is taking place,” he said. 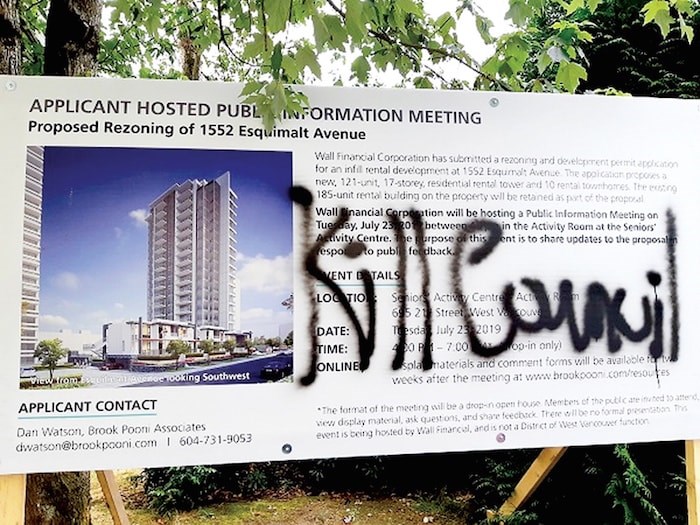 It’s been a tumultuous early term of council in West Vancouver, Powers acknowledged, but she said the tenor of public discourse has been declining and abuse towards public officials has been escalating for some time, all over.

“I am constantly surprised,” she said. “The tone of society has been changing really rapidly but it’s not just in West Vancouver.”

Anyone with information about the threats is urged to contact police at 604-925-7300. If they wish to remain anonymous, they may contact Crime Stoppers at 1-800-222-TIPS or solvecrime.ca.