There’s a cluster of large rocks cemented into the ground outside Main Street skateboard shop Antisocial. Painted in a rainbow of colours, the jagged stones could easily be mistaken for an art installation by passersby. However, anti-poverty advocates argue the rocks serve another purpose — they take away a sheltered spot to sleep under the store’s awning. 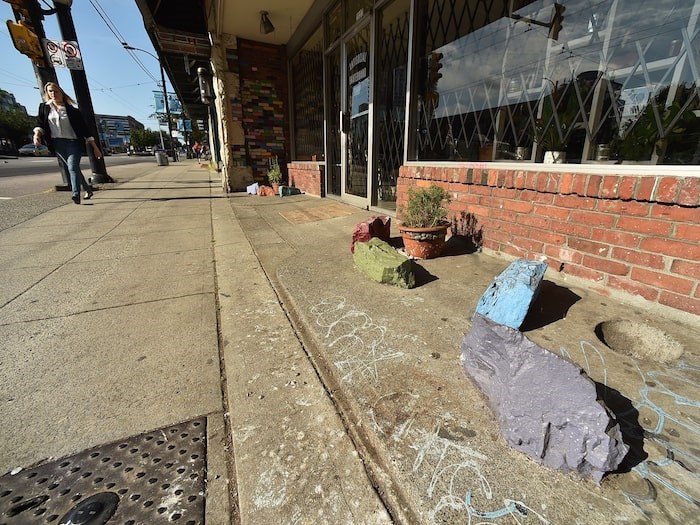 An employee of Antisocial says the rocks outside the shop were there long before the Main Street skateboard store opened. Photo by Dan Toulgoet/Vancouver Courier

The Courier reached out to the owner of Antisocial for comment but did not receive a response. However, Kelly Day, an employee at the shop, said he believed the rocks, affixed into the pavement on either side of the entrance, were there long before Antisocial opened.

Ironically, skateboarders are no stranger to so-called defensive architecture, a now ubiquitous feature of urban design intended to prevent unwanted behaviour in certain public areas, such as loitering, sleeping and, yes, skateboarding.

In the early ’90s, Vancouver’s financial district became ground zero for a new invention called “skatestoppers.” Since then, these metal clamps have been fastened to curbs, ledges and other surfaces across the city rendering once-popular skate spots obsolete.

However, most defensive design targets the homeless, from armrests blocking people from lying on benches to planters and boulders that obstruct sheltered space, like the rocks that sit outside Antisocial.

But according to Pivot Legal Society, hostile design does more than just shoo homeless people away, it engenders a city-wide atmosphere of exclusion, driving Vancouver’s most vulnerable off the street into the city’s parks. 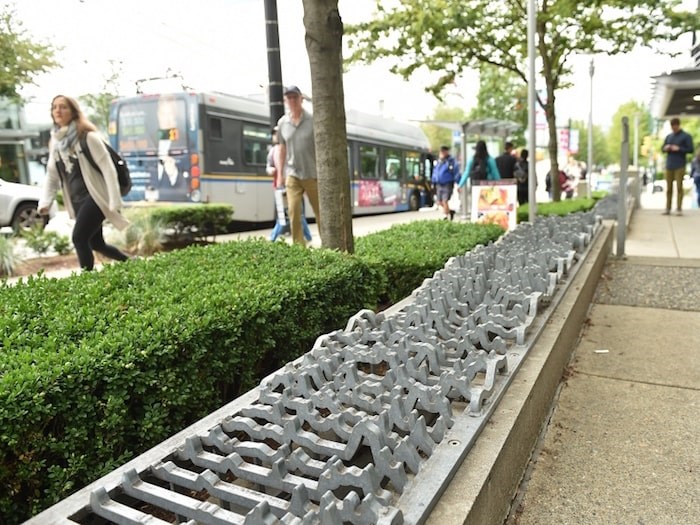 The City of Vancouver says these wavy, metal vent covers on Cambie are an art installation and weren’t intended to prevent people from sleeping there. Photo by Dan Toulgoet/Vancouver Courier

Meenakshi Mannoe, a community educator at Pivot Legal Society, traces the roots of hostile architecture to the prevailing stigma associated with homelessness.

“The general public is almost trained to see people who rely on public space as a nuisance, an eyesore,” she said.

Not only does defensive design reinforce negative stigma, but it pushes homeless individuals to set up “informal tent city structures,” where people feel a greater sense of security and community, says Mannoe.

For years, homeless Vancouverites have camped in parks across the city, most notably Oppenheimer Park, the home of several recent tent villages. This past spring, an Oppenheimer camper told the Courier he ended up in the park because local shelters were full and he didn’t feel welcome sleeping on the city’s streets.

On June 13, the park board counted more than 100 tents at the Downtown Eastside park. The Carnegie Community Action Project, a local activist organization, says this latest tent city, which began last summer, is the longest-running iteration to date. Previous Oppenheimer camps were eventually shut down by the city.

Andy Yan, director of the City Program at Simon Fraser University, describes hostile design as a “twisted, decorative hack” that does nothing to resolve homelessness.

“You have somebody facing profound physical, social [and] mental challenges, and you're solving it through a decorative hack,” he said. “That is a very superficial — one might even call it craven — response to larger social and economic issues of exclusion.”

Yan says the phenomenon is yet another indicator of growing inequality in Vancouver. 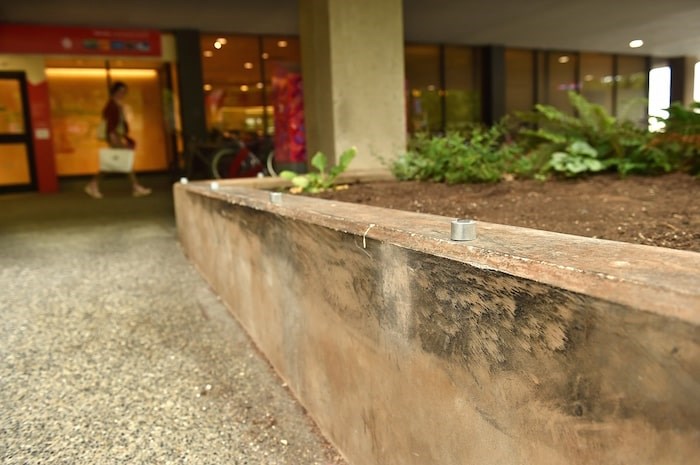 Metal clamps have been fastened to curbs, ledges and other surfaces across the city rendering once-popular skate spots obsolete. Photo by Dan Toulgoet/Vancouver Courier

“It's a response to a challenge that actually isn't just about public space,” Yan explained. “It's about the issue of affordable housing — and how we haven't been able to develop a stock of stable, affordable housing in the city for a long time.”

“These are the faces and behaviours of inequality.”

According to data released June 12, approximately 2,223 homeless people were living in Vancouver this past March, including 614 without a shelter. This year’s homeless count was the highest figure recorded since the city began tallying in 2002.

According to Jason Olinek, Vancouver’s assistant director of development planning, the city has no formal policy for sidewalk design. But he says Vancouver places a strong focus on inclusivity in its planning.

“We don't have any policies that I'm aware of that explicitly or implicitly try to prevent people from using the sidewalk [...] or being hostile as it were toward anyone in general, homeless or not,” Olinek told the Courier.

However, he said the city analyzes many projects through a framework called Crime Prevention through Environmental Design (CPTED). The concept aims to eliminate architectural and planning features that could encourage illicit activity, such as poorly lit entrances or hidden alcoves. CPTED also involves the “hardening” of the area surrounding buildings to deter loitering, through perimeter fencing, bright lights and other defensive design strategies.

Michael Geller, a local architect, developer and Courier columnist, supports this approach to urban design, even if it alienates a certain segment of the population.

“I think we should be trying to find better ways to accommodate the homeless, rather than designing benches to facilitate people sleeping outside,” Geller said. 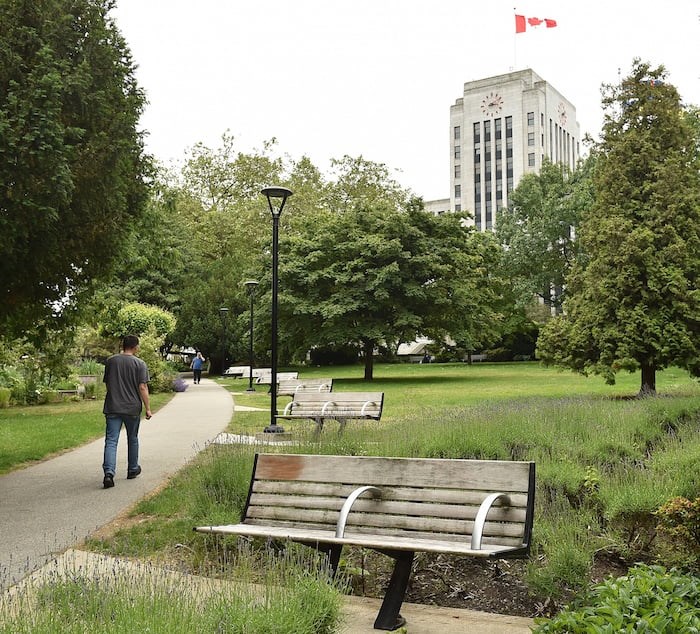 Benches, such as these found at city hall, are divided by an arm rest that prevents people from sleeping on them. Photo by Dan Toulgoet/Vancouver Courier

He firmly supports the city’s temporary modular housing program, an initiative he says he has encouraged for years. But as long as some people are sleeping rough, Geller would rather they congregate in a park than set up camp on the street.

Geller recently faced online backlash after voicing support for Penticton’s new bylaw which fines residents for sitting or lying down on some downtown streets.

It should be illegal to lie on public sidewalks. https://t.co/8yF7HANtNx

Meanwhile, Mannoe and her colleagues at Pivot Legal Society encourage Vancouverites to do their part to create what they call a more inclusive city.

Mannoe specifically called upon Antisocial Skateboard Shop to consider how the large rocks outside the shop not only deprive homeless people of a valuable place to shelter, but also contribute to the stigma and exclusion these individuals face.

CLARIFICATION: Ppl pointed out that Antisocial Skateboard may not be able to remove these rocks per their lease. TBD.

“I think it's hard to just cold call a business and be like, 'Take down the rocks!'” said Mannoe. “I think what's more effective is to talk about stigma and how stigma does inform things like defensive architecture.”

She added, “Skateboarders are actually uniquely positioned to thoughtfully consider design because it impacts how they also navigate the city on a regular basis. I hope that they'll be considerate and advocate to get the rocks removed.”