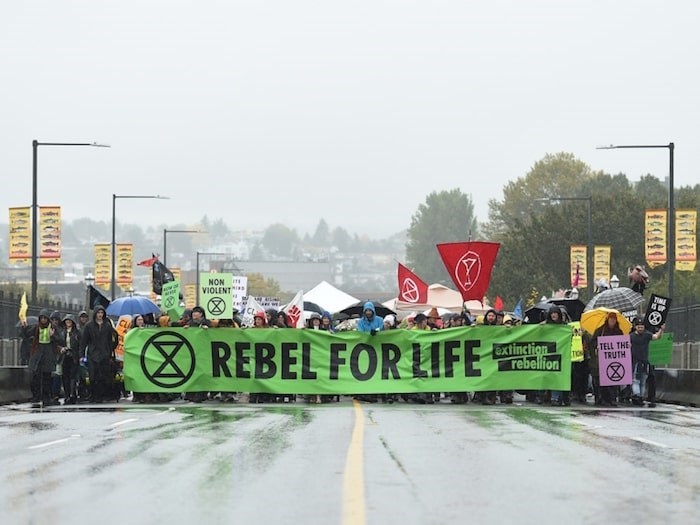 Extinction Rebellion closed off the Burrard Bridge in protest against the Trans Mountain Pipeline on Oct. 7 in 2019. Photo: Dan Toulgoet

A protest against the Trans Mountain Expansion Pipeline is expected to see a blockade form in Vancouver Monday afternoon.

An environmental activist group has announced its plans for a “railway blockade" at Renfrew Street and Grandview Highway – near Renfrew Skytrain Station in East Vancouver – which will commence at 4 p.m.

Extinction Rebellion Vancouver – the same group that held a day-long protest that closed the Burrard Bridge on Oct. 7, 2019, followed by a route-less snake march through downtown Vancouver – said it will block trains coming through.

“The government is not taking the necessary measures to protect Canadians from the climate crisis,” a group spokesperson, Zain Haq, said in a press release.

“Instead, it is pushing ahead with this pipeline which will exponentially increase production in the tar sands.”

"Rail blockades are also safe during COVID-19 as they don’t require large amounts of people crowded together," which the group said will "result in enormous economic damage to the state."

"Come with a mask," an invitation reads on Facebook. The blockade will continue for two hours, until 6 p.m.

Extinction Rebellion hopes its pressure upon "the Trudeau government [will] cancel the Trans Mountain Expansion Project.”