OpenMedia, a Vancouver-based internet privacy group, says it tried to place an ad at the Canada Line’s YVR station, which the airport has authority over.
0
Apr 29, 2019 6:58 AM By: Alyse Kotyk

Passing through international security can be a daunting process, especially when a traveler is unsure of their rights.

But one group is criticizing Vancouver International Airport after its ads aiming to demystify the process by pointing travellers to information on digital privacy rights were rejected. 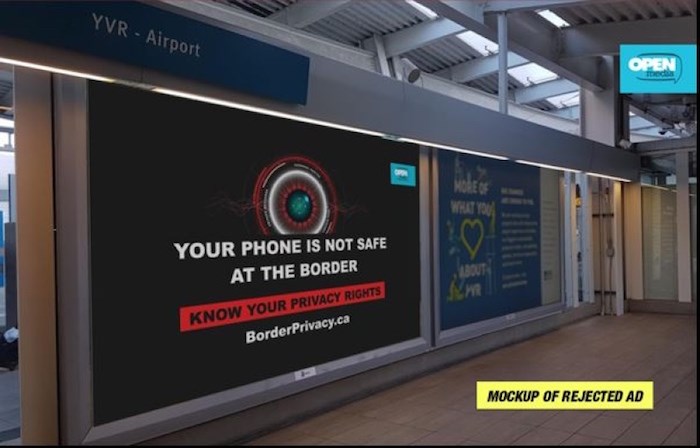 A mock up of the ad rejected by YVR. Photo: OpenMedia/Twitter

OpenMedia, a Vancouver-based internet privacy group, says it tried to place an ad at the Canada Line’s YVR station, which the airport has authority over.

The ads promote the group’s website, borderprivacy.ca, which was made in partnership with British Columbia Civil Liberties Association and provides resources in multiple languages outlining rights on having digital devices searched at the border and how to submit a complaint if those rights are violated.

The website also links to a petition seeking change to these search laws.

Victoria Henry, a rights campaigner at OpenMedia who has led this particular campaign, told the Richmond News they were surprised to see the ads rejected.

“There were a lot of different directions we could have taken the ad in, you know we could have said something really outrageous…it simply informs people about their rights at the border,” Henry said.

“This is a huge issue for a lot of people and a lot of people in Canada and folks who are crossing our border just don’t know anything about these rules and some of the vulnerabilities and potential privacy violations they could be facing.”

The key issue, Henry explained, is that the laws haven’t been updated in quite some time, but cellphone use has increased significantly.

“Most people would barely hand over their phone to a good friend, much less a border agent who kind of wants to come through and a take a look at all the information on there,” she said.

“The fact is the laws that govern these kind of searches are just so out of date. They haven’t been meaningfully changed to reflect how much information we carry on our phones now.”

YVR explained to the News by email that they felt the ad “pitted two groups against each other and it also has potential to add undue stress to the travel experience.”

The airport also stated that it “aims to be non-political” and felt the link to a petition was problematic.

For Henry, however, asking for change from the government is a key part of the group’s campaign.

“I think that’s a big freedom of expression issue and I don’t think that everyone would agree that the airport should have rejected (the ad) for that reason,” she said.

“But ultimately why I personally wouldn’t change that is because I think that knowing your rights is only half of the equation...the real way people can actually protect themselves is to challenge these laws.”

YVR added that they provide their own resource website on passenger rights and advertises this site on its digital signage throughout the airport.

Regardless of YVR’s rejection, Henry said OpenMedia hopes the ads will run on other areas of public transit.