A 71-year-old woman ticketed for distracted driving in downtown Vancouver has had the $368 citation issued to her cancelled by police with an apology.
Oct 3, 2019 10:01 AM By: The Canadian Press 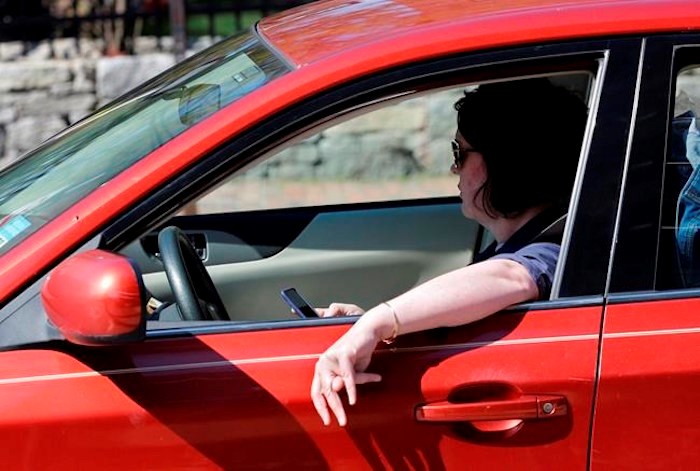 In this Thursday, May 16, 2019 photo, a driver uses his cell phone while driving in Portland, Maine. The son of a 71-year-old senior ticketed for distracted driving says the $368 citation issued to his mother has been cancelled by Vancouver police, and the department has also apologized. THE CANADIAN PRESS/AP-Robert F. Bukaty

VANCOUVER — The son of a 71-year-old woman ticketed for distracted driving in downtown Vancouver says a $368 citation issued to his mother has been cancelled by police with an apology.

Trevor Kramer says his mother, Randi, was ticketed Monday because her cellphone was charging in the front-seat cup holder.

Kramer says she explained that she was looking straight ahead with both hands on the wheel prior to being stopped, ticketed and told the phone was not allowed to be visible.

Kramer complained online about the first ticket he says his mother has received in 50 years of driving, which caught the attention of a Vancouver lawyer who specializes in such cases and offered to intervene.

Kyla Lee says she told police the ticket was unnecessary because Randi Kramer's actions posed no risk of causing an accident.

Trevor Kramer says the ticket was cancelled Wednesday and a sergeant phoned his mother to apologize.

Lee hopes legislators make the wording of distracted driving offences more specific to rule out such misunderstandings in future.

"If they're trying to prohibit people from charging their phones or having phones loose in the vehicle, they need to make that clear to the public so the public can adjust their behaviour accordingly," she said.

Data from the Insurance Corporation of British Columbia says distracted driving claims more lives on B.C. roads than impaired driving, with an average of 78 deaths every year blamed on distracted and inattentive drivers. (CTV)

This report from The Canadian Press was first published on Oct. 3, 2019.