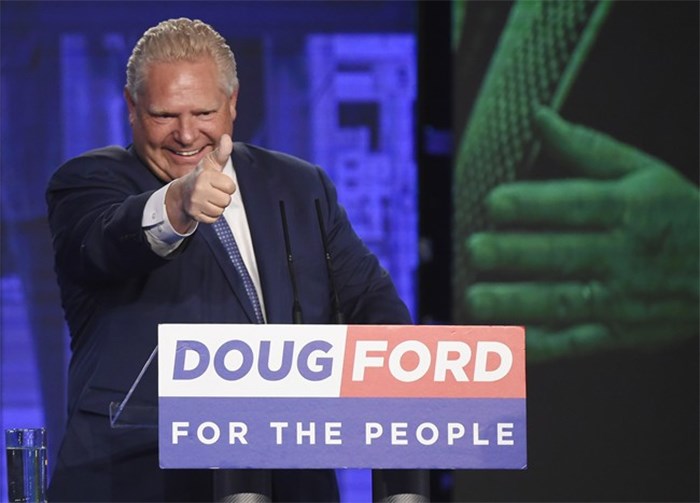 Doug Ford rode a populist wave to power in Ontario on Thursday, capturing a Progressive Conservative majority by harnessing voters' economic anxiety and anger with a scandal-plagued Liberal government.

The Tory leader's election promises, which invited comparisons to U.S. President Donald Trump, were in stark contrast to the other left-leaning major parties and included income tax cuts, scrapping the Liberals' updated sex-ed curriculum and strongly opposing a carbon tax.

"A new day has dawned in Ontario — a day of opportunity, a day of prosperity and a day of growth," he told a crowd chanting his name Thursday night.

The Liberals saw a stunning collapse after leading the province for the past 15 years and capturing a majority government just four years ago. Premier Kathleen Wynne resigned as Liberal leader, most cabinet ministers lost their seats, and all but a handful of the staunchest Liberal ridings fell.

The NDP will form the Official Opposition, marking a turnaround for a party consistently stuck in third place since Bob Rae's New Democratic government was defeated in 1995.

Ford is a newcomer to provincial politics, having only captured the party leadership three months ago. He beat out establishment favourite Christine Elliott after former leader Patrick Brown stepped down over sexual misconduct allegations that he denies.

"My friends, together in 88 short days we achieved the impossible," Ford said. "We united our party and united our province and this is your victory."

Under Ford, the Progressive Conservatives recaptured the province they have not led since 2003, overcoming the failings of the past three elections that saw them unable to defeat the Liberals.

But Ford's campaign certainly wasn't immune to controversy. He dismissed allegations that he was involved in selling bogus Progressive Conservative party memberships, a candidate was dropped following accusations he was involved in an alleged theft of customer data at a toll highway operator, and Ford was frequently accused of failing to be transparent by dodging calls to release a fully costed platform.

With about one week left in the campaign, the party published a list of promises and their price tags, but didn't indicate how they would pay for them, what size of deficits they would run or for exactly how long.

Then in the waning days of the election, Ford family drama — that laid mostly dormant in the public sphere since the death of his brother, former Toronto mayor Rob Ford — burst onto the scene with a lawsuit from Rob Ford's widow alleging Doug Ford mishandled his brother's estate and destroyed the value of the family business.

Ford, who has positioned himself as a champion of "the little guy," is a wealthy businessman.

He's the second son of Diane and Doug Ford Sr., a provincial politician for one term in the late 1990s. He has spoken about his family on the campaign trail and launched his bid for the Tory leadership from his mother's basement in west Toronto.

He was first thrust into the national spotlight because of his defences of his scandal-plagued brother, whose admission of using crack cocaine made international headlines. He grabbed his brother's former city council seat when Rob Ford was mayor, and stepped in as a Toronto mayoral candidate when cancer forced his brother to give up on running for a second term.

"I know that my brother Rob is looking down from heaven," Doug Ford said. "I'm just getting chills talking about him right now. I know Rob is celebrating with us tonight. We owe so much to Rob's legacy — a legacy of service to the people, a legacy started by my father Doug Ford Sr. and a legacy that will continue."

The crowd of Tory supporters at the Toronto Congress Centre erupted into cheers as a Progressive Conservative majority was called. People waved party signs and embraced while they waited for Ford to arrive. Each time Wynne's image came up onto the screen the crowd booed. The crowd booed again when news came that NDP Leader Andrea Horwath won her Hamilton riding.

A Liberal defeat was predicted by Wynne herself just days before the vote, as she admitted her party had such low support it would not form government again. She inherited a government already rife with billion-dollar scandals, but under her leadership more fuel was added to the fire, such as rising hydro bills and questionable government spending.

The Liberals came to power in 2003 under Dalton McGuinty, and when he stepped down in 2013, Wynne took the reins. She led the party to a majority in 2014, despite the party already being bogged down by scandals at eHealth Ontario, air ambulance service Ornge and a price tag of up to $1.1 billion to cancel two gas plants.

But her popularity began to soon dip, and reached well below 20 per cent in 2016 and 2017, in large part due to anger over rising hydro prices. She also faced criticism over her partial privatization of Hydro One and her decision to plunge the province's books back into the red after finally getting them to balance in 2017-18.

Wynne spent the last few days of the campaign pleading with voters to at least elect some Liberals — party insiders say they are worried they could win fewer than eight seats, which would mean a loss of official party status in the legislature.