Dr. Jack Chang has performed vasectomies on between 7,000 and 8,000 men out of Vancouver’s Pollock Clinics. He also travels to countries such as Kenya, the Philippines and Haiti to spread information around a largely taboo subject in those places.
0
Mar 28, 2018 4:38 PM By: John Kurucz 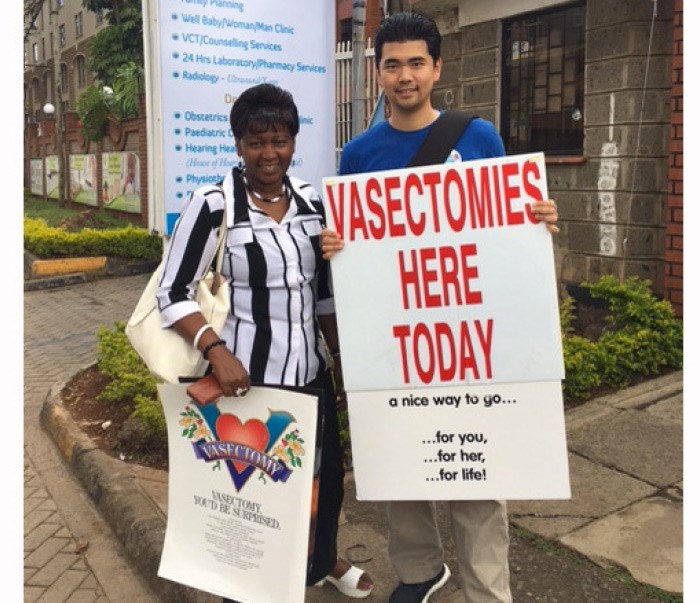 Dr. Jack Chang has performed vasectomies on between 7,000 and 8,000 men out of Vancouver’s Pollock Clinics. He also travels to countries such as Kenya, the Philippines and Haiti to spread information around a largely taboo subject in those places.

If going kid-less is key to curbing global warming, then Dr. Jack Chang just might be a cardinal of climate change.

Chang has been in the vasectomy game for four years and slipped the snips on somewhere between 7,000 and 8,000 men out of Vancouver’s Pollock Clinics.

Virtually all of those men come to him equipped with information, choices and dialogue with their families and partners. The same can’t be said in other parts of the world, where cultural, religious, governmental and social norms stigmatize the contraceptive practice.

That’s where World Vasectomy Day enters the picture (yes, such a thing exists). Established in 2012 and typically observed in November, the international events entail education around family planning, doctor training and free vasectomies.

Those World Vasectomy Day-related initiatives have taken Chang to Kenya, the Philippines and Haiti to spread information around a largely taboo subject in those places.

“Everywhere we go, no matter where we go, there is resistance,” Chang told the Courier. “The common refrain is ‘our men don’t do this sort of thing.’”

Chang was in Kenya last year and encountered next level opposition in trying to spread the word. Some Kenyans thought vasectomy meant sex change. Others thought it was a tribal witch hunt meant to influence government policy.

More locally, other myths centre around how the procedure may negatively affect the libido, erections or the volume of sperm a man can produce.

Chang’s most recent trip to Haiti in mid-March was his second time there in four years. Other physicians from the Pollock Clinic have been going to the island nation three times yearly since it was ravaged by an earthquake in 2010.

Alongside three other doctors from across North America, Chang’s trip covered several duties: offering and publicizing free vasectomies, training local doctors in the procedure and answering questions about the procedure. He performed between 200 and 300 vasectomies during his week-long trip.

To put that in perspective, Chang estimates 30 were done each year in Haiti prior to 2010. On average, men who underwent the surgery had five kids in their family. One man had fathered 12 children. Chang said some patients travelled 10 to 20 hours for the operation.

“It’s not about the number of procedures we do anymore. That used to be something we really focused on,” Chang said. “Now it’s about what kinds of conversations can we have with people, what kind of myths we can dispel and how we can promote more positive masculinity within countries where lots of violence and domestic abuse are attributed to men.”

Whether it’s in Vancouver or abroad, Chang wants to make men more accountable and apart of the family planning process. In fact, most men coming to his Vancouver location are looking to do just that.

“Their partners are usually at a point where they’ve long tried different contraception methods — birth control pills, injections, IUD — and are suffering through the side effects of depression, weight gain and migraines,” Chang said. “What I’m seeing more and more is a man saying, ‘She pushed a child out of her, the least I can do is get a five-minute procedure.’”

That five-minute procedure is done with local anaesthetic, no needles and runs about $600. The procedure is partially covered by MSP, but as of April the Pollock Clinics will no longer be enrolled in the Medical Services Plan.

Music plays in the background and patients, most of whom are in their early 30s, are awake. As for recovery time, desk workers can return to the job within a day or two, while more strenuous job types require seven days of rest.

“Most men, especially because it’s involving ‘down there,’ they will read every single word on a very extensive site with lots of information long before they show up,” Chang said. “By the time they show up in front of me in an exam room, most of these men probably know more than me about vasectomies.”