If you’ve lived in the Lower Mainland long enough, you’ll have grown used to media reports of “drive-by shootings.” A regular occurrence on the Dinsmore Bridge — although less fatal, but quite revolting — is "drive-by droppings."
Nov 1, 2018 11:07 AM By: Alan Campbell 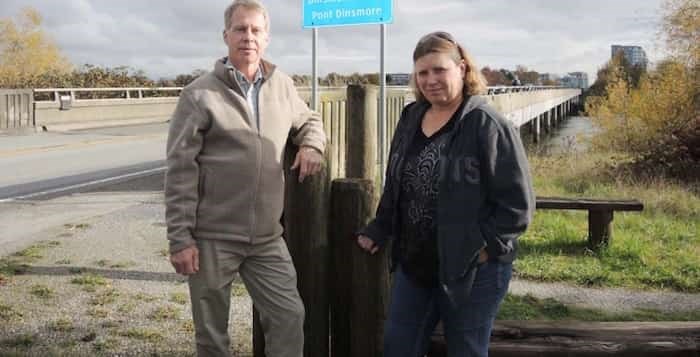 Michael Fleck and Tami Arseneault have had enough of someone throwing excrement onto the Dinsmore Bridge. Alan Campbell photo

If you’ve lived in the Lower Mainland long enough, you’ll have grown used to media reports of “drive-by shootings.”

A regular occurrence on the Dinsmore Bridge — although less fatal, but quite revolting — has a two-letter difference and is raising the ire of some Richmond residents.

For reasons beyond the imagination of all concerned, for the last 18 months, someone appears to be throwing plastic bags full of human excrement from a moving vehicle onto the bridge, which connects Gilbert Road to Sea Island.

The practice has left a number of workers from the nearby industrial estate scratching their heads as to why and pointing their fingers as to whose job it is to clean it up.

“Maybe it’s from someone’s Porta Potty, who knows? I’m not certain it’s human (feces), but it looks too big to be from a dog or other animals,” said Tami Arseneault, when asked how she knows it’s not coming from dogs.

Maybe someone is “holding a grudge against the city,” added Michael Fleck, who has been complaining to the City of Richmond and YVR for a year and a half.

“I don’t really know. What I do know is that, the other day, I drove my son to the airport about 5 a.m. and there was nothing there. I drove home an hour or so later, there was maybe six bags on the bridge. It’s disgusting.”

Arseneault said it usually happens overnight, as she drives home in the afternoon, with nothing on the bridge, and drives back early the next morning to see bags full of excrement strewn, sometimes burst, along the sidewalk.

“There has been suggestions it’s from a homeless camp down the river there,” said Fleck, who walks a circuit most lunchtimes over the river and back over the Dinsmore Bridge.

“But why would you walk all the way down here and dump bags of it on the bridge? It makes no sense.”

Fleck said that, 18 months ago, he got “so disgusted to the point where I had to do something.”

After many months of complaining to anyone and everyone that could possibly be responsible for cleaning the bridge, Fleck and Arseneault finally got word that the airport is in charge of the bridge’s maintenance.

“The airport seems to be the go-to people, but they said maintenance would be set up...then nothing,” added Fleck.

“I’ve given up reporting it all the time, because nothing happens. One time it was scattered along the railing, as if it had been thrown at high speed. Maybe we need to put a camera out there or something? But there’s not much you can do, I guess, if someone wants to be a jerk.”

Clean it up “when we report it, that would be a good start,” suggested Arseneault.

A spokesperson for YVR thanked Fleck and Arseneault for bringing the situation to their attention, adding they “understand their frustration.

“...YVR has received a few notifications of general garbage on the Dinsmore Bridge. This bridge does fall under YVR’s jurisdiction and as such, our maintenance crews regularly patrol the areas. In response to these separate concerns, they were dispatched for immediate clean up.”

However, the spokesperson said in a statement that the airport understands “this is a larger, ongoing issue and one that we take seriously.

“We have taken several immediate actions to address the situation, including expanding the duties of our contractor responsible for maintenance patrols on the Dinsmore Bridge. We have also notified our local RCMP detachment.

“We will continue to monitor the situation to ensure the cleanliness of the roadways and grounds that we manage.”