Police estimated that the speeder was going around 150 kilometres per hour, but slowed to about 80 km/hr when they went by the police officer holding the laser gun.
0
May 16, 2019 7:36 AM By: New West Record

Wednesday was a bad day for the driver of a black Honda Civic who chose to speed on the opposite side of the street from where a Speed Watch station was set up.

New Westminster Sgt. Greg Smith was parked on the side of 10th Avenue near Third Street when his radio went off, alerting him to the speeder. 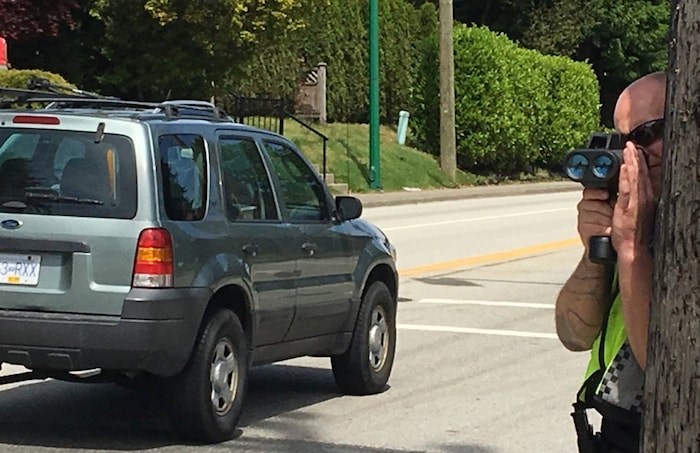 Police estimated that the speeder was going around 150 kilometres per hour, but slowed to about 80 km/hr when they went by the police officer holding the laser gun at Second Street. The Speed Watch was in a 50 km/hr zone.

Smith had been telling The Record about what he’d been doing up until then – monitoring passing cars with an ALPR or Automated License Plate Recognition system.

“So it’s checking all the plates,” he said, adding it can detect if the driver doesn’t have insurance, if they’re prohibited from driving, or if there are warrants out for them.

“We’re getting them all ways, shapes and forms, from speeding to everything,” he said.

Speed is the leading cause of car crash fatalities in B.C., according to ICBC, and 82 people are killed in speeding crashes annually. Twenty-six of those are in the Lower Mainland.

The Speed Watch Campaign involves a two-strike strategy, with the first strike being the Speed Watch volunteers with a speed reader board, according to Karon Trenaman, ICBC road safety coordinator.

The volunteers were based at Fifth Street.

“So the strategy for Speed Watch is to encourage motorists to slow down and actually do the posted limit or just below,” she said.

The traffic section is down the road at Second Street, she added.

“So anybody who goes by that’s speeding, they’ll ticket them,” Trenaman said.

Volunteers like Mary Gagnon have helped with the Speed Watch campaigns, as well as other community policing initiatives.

Gagnon has been volunteering for more than 20 years.

“I just like to know what’s going on in my community,” she said.

Mary has seen people speeding through school zones and park zones, which are areas Speed Watch monitors in particular.

She estimates that half the vehicles in the school zones she’s seen are going above 30 km/hr, and some are going 60, 70 or 80 km/hr.