Instead of driving down a set of stairs, this time a person has mistakenly driven their car on the pedestrian path at Sunset Beach.
0
Aug 11, 2019 1:25 PM By: Elisia Seeber

Another ‘what the’ driving moment has been captured on video in Vancouver.

Instead of driving down a set of stairs, this time a person has mistakenly driven their car on the pedestrian path at Sunset Beach. 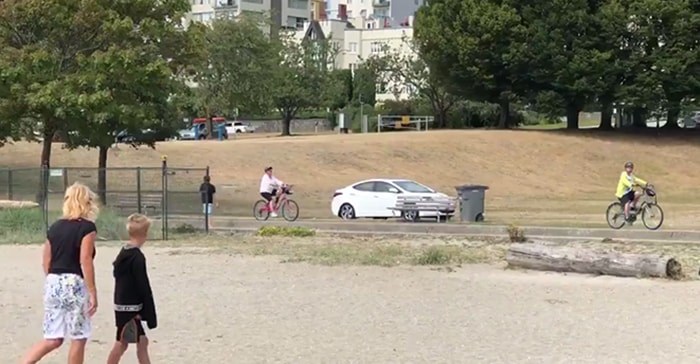 A person has mistakenly driven their car on the pedestrian path at Sunset Beach. Photo: Josh Loewen

A video of the incident was posted to Twitter on Friday, Aug. 9, afternoon by Josh Loewen.

Loewen told Vancouver Is Awesome he was at an agency meet up at the beach around 3:15 p.m. when he, and coworkers, spotted the white sedan on the walking path.

“The person drove from the parking lot and we were all yelling, ‘where you going, pal!?’" Loewen says.

“There’s a cement path from that parking lot off Beach Avenue so I’m guessing it was actually just a misread on whether it was a road or not.”

He says the driver eventually realized the path wasn’t a road and they “turned around and got out of there.”

Apparently, it's quite a common mistake - according to fellow Vancouverites on Twitter.

This incident comes after a woman was fined $368 for driving down a set of stairs at Sheraton Wall Centre in downtown Vancouver last month.

At the time, Vancouver Police Department Constable Steve Addison said the incident “was largely due to driver inattention.”

V.I.A contacted VPD about the Sunset Beach incident but is yet to get a response.