Dunsmuir viaduct land to be transformed into housing for homeless

A piece of land east of the Dunsmuir viaduct increasingly being used by homeless people to pitch tents and store their belongings has been identified by the city as a future modular housing site for the homeless.
0
Aug 1, 2018 7:12 AM By: Mike Howell

A piece of land east of the Dunsmuir viaduct increasingly being used by homeless people to pitch tents and store their belongings has been identified by the city as a future modular housing site for the homeless, the Courier has learned.

The city is expected to announce details later this week on the size of the modular complex and how many tenants it can accommodate when it’s built on the park-like space that runs along the 200-block Union Street between Gore and Main streets. 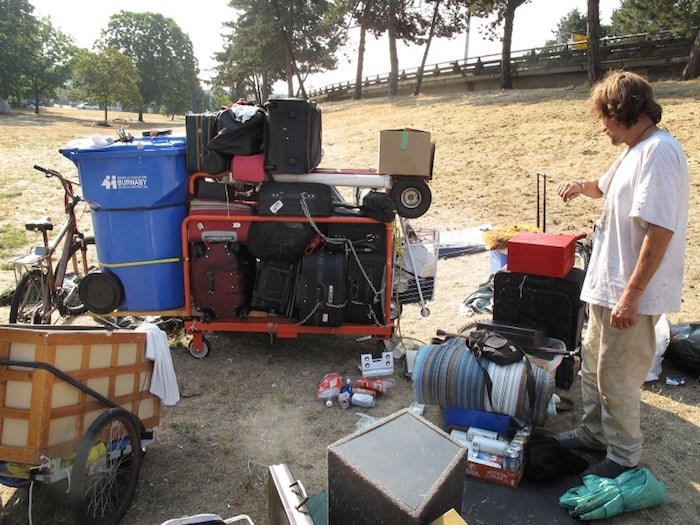 Bernie Priestley checks his watch to see how much time he has to move his tent and belongings from a park-like space on Union Street. City workers told him Monday he had to leave the green space, where he slept the previous night. Photo Mike Howell

The Courier learned of the modular housing plan after a resident on Gore Street, which faces the property, said he received a letter last week from the city notifying him of the transformation to come on the heavily-treed land that is adjacent to several businesses and homes.

Abi Bond, the city’s director of affordable housing projects, confirmed the site is one of the properties chosen to be among the nine to 10 across Vancouver that will provide a total of 600 units of housing for three to five years for homeless people.

So far, the city has opened four sites, with 208 units. The city’s goal is to have all 600 units open before the end of the year on various pieces of property, including sites in Fairview Slopes, Little Mountain and near the Olympic Village.

The Union Street property, along with other pockets of green space at both ends and sides of the viaduct, has increasingly become a refuge for homeless people. Many of the homeless have overloaded carts, several bikes and piles of miscellaneous stuff spread out on the grass and concrete.

The Courier counted nine tents pitched Monday morning at the future modular housing site. One man was sleeping on a piece of cupboard, saying he was tired from a night of collecting cans and bottles, only to have them stolen when he left them outside to use a washroom.

At the west end of the green space, Bernie Priestley was packing up his cart full of suitcases, electronic gear and other wares he has collected to sell on the streets. He was just told by city workers that he had to fold up his tent and move on from a space where he said he and his friend were targeted the previous night by apartment dwellers living across the street.

“Someone was throwing rotten meat, butter and celery stock or something at us,” said Priestley’s friend, who gave his name as George.

“I think I know who it is,” said Priestley, pointing up to a balcony near the top of the building.

Priestley, 52, said he has been homeless for one year after being evicted from a single-room-occupancy hotel on Princess Street. The reason he was evicted, he said, was related to an argument with a tenant.

For a time, he lived at the now-dismantled homeless camp on Franklin Street, which is home to a new 39-unit modular housing building for women. Priestley said he is familiar with the city’s plan to build modular housing across Vancouver, but is not confident he will get a room, noting he’s been on B.C. Housing’s waiting list for a long time.

If his luck changes, he added, this is what housing would do for him: “I’d be hygienically cleaner. That would make me happier. I’d have a safe place to sleep. That would give me more of a positive outlook. I wouldn’t have to go out and hustle and sell merch every day. I have to buy my food almost on a daily basis because I’ve got no place to keep it so it stays good.”

Priestley was walking with a noticeable limp and explained his right leg got infected after a bicycle accident. He said he later collapsed on the street and woke up in an ambulance. He said he was in hospital for three weeks.

The Manitoba native said he was recently laid off from a job at a nearby recycling business, where he sorted merchandise brought in by customers. He does similar part-time work at a Value Village warehouse, but said his sore leg makes it difficult to stay employed.

He said he’s noticed an increase in homelessness in Vancouver, particularly with younger people addicted to drugs. Priestley, who takes Suboxone to manage his addiction, said he is equipped with two naloxone kits.

“I see kids pounding needles into their arms,” he said, noting about 80 per cent of the people he meets on the streets are from back East. “I don’t know why they come out here. They think they’re coming to the promised golden land, or something.”

Stewart James, who lives in an apartment across the street from the green space, was walking his dog on the morning Priestley and others were told to pack up. James said he wasn’t aware of the city’s plan to build a modular housing complex on the property.

He said many people have complained about the tents, the garbage and discarded drug paraphernalia, including syringes, on the property. James, who noted he had to step over human waste during his walk, said the growing homelessness is a topic of conversation among tenants.

He said he welcomes the addition of modular housing in the neighbourhood, but fears it could create a ghetto if the city doesn’t properly manage the complex and provide the needed support many of the homeless people need.

“I’m definitely not a NIMBY,” said James, as he looked over the park space. “But there’s going to be a lot of people in this area who are not going to be fans.”

Regardless of the modular housing addition on Union Street, the city has future plans for the neighbourhood known historically as Hogan’s Alley. The area, which includes the popular Union Street bike route, will eventually be developed for affordable housing when the Dunsmuir and Georgia viaducts are demolished.

The city opened a 52-unit modular housing building Friday at 4480 Kaslo St., near the 29th Avenue SkyTrain station. The Sarah Ross House, which offers self-contained suites and is managed by Atira Property Management, is the fourth site opened by the city.

Approximately 350 homes on five more sites are in various stages of the development process. The next two sites likely to open will be located at 2132 Ash St., near the Olympic Village Canada Line station, and at the Little Mountain property.

Housing Minister Selina Robinson, who spoke at the opening of the Sarah Ross House, said each of the modular housing buildings come with around-the-clock support staff via non-profit housing operators. Robinson noted the needs of tenants are diverse.

“For some, it might mean they need help with meals, or connections to health and wellness programs,” the minister said. “Or perhaps they need some support around employment supports.”

Priestley, meanwhile, was back to his same spot on the property Tuesday morning.