A wildfire discovered Sunday evening north of Oliver, B.C., in the district of Okanagan-Similkameen has prompted an evacuation alert for several properties and the Osoyoos Indian Band.
Aug 6, 2019 6:46 AM By: The Canadian Press

VANCOUVER — A wildfire discovered Sunday evening north of Oliver, B.C., in the district of Okanagan-Similkameen has prompted an evacuation alert for several properties and the Osoyoos Indian Band.

The regional district is advising residents to take proactive measures to prepare for an evacuation order in case the blaze, dubbed the Eagle Bluff fire, grows. 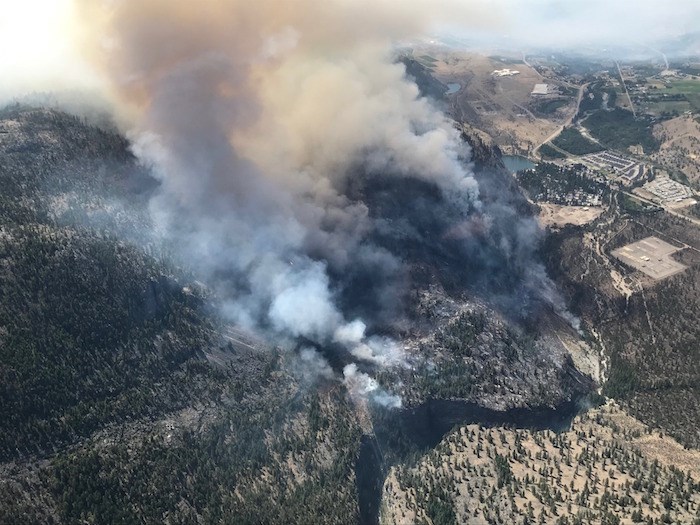 The Eagle Bluff Fire near Oliver, B.C. Photo by BC Wildfire Service/Facebook

The fire is estimated at 225 hectares, according to the B.C. Wildfire Service.

The fire could spread quickly, fuelled by hot temperatures as well as dried out sage and grass, Swift said.

"It hasn't seen much rain and there's been quite long drying periods. That fuel is quite ready to ignite," said Swift, noting the area currently has the highest fire danger rating in the province.

Six helicopters have been assigned to support crew on the ground. There were 22 personnel fighting the fire on Monday morning, with an additional 80 arriving throughout the day from across the province.

"The crews are working in quite steep and rocky terrain and we are expecting highs of around 35 (degrees Celsius)," Swift said, adding the suspected cause of the Eagle Bluff fire is human activity, although it's under investigation.

An evacuation alert for more than 200 properties remains in effect Tuesday morning in the area of the fire. 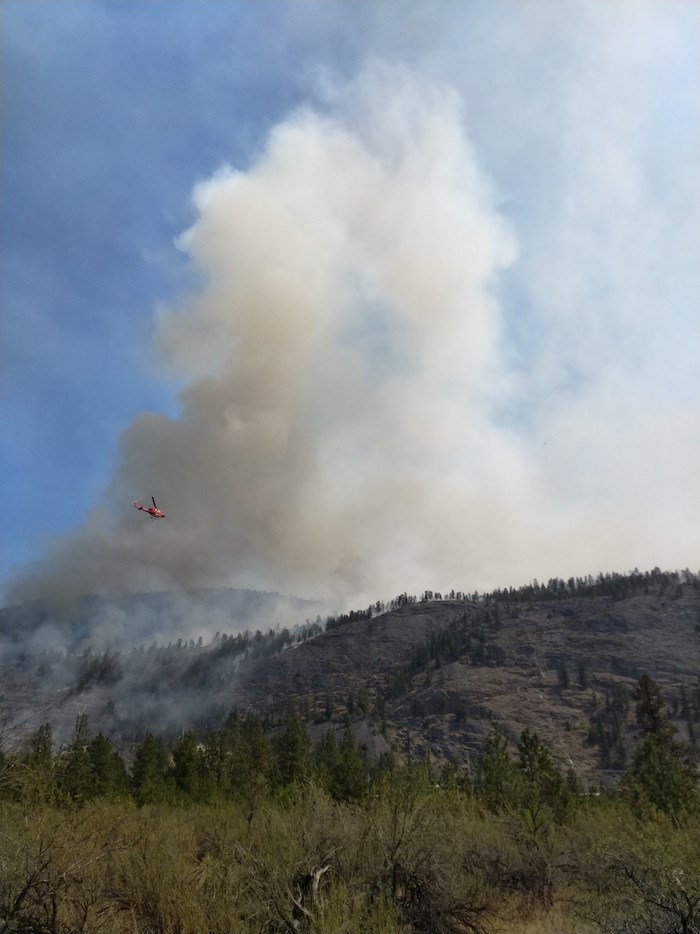 "The RDOS-EOC is active and RDOS staff have been working with BC Wildfire Service, Osoyoos Indian Band, RCMP, Oliver/Osoyoos Search and Rescue(SAR) and Penticton SAR to ensure that the residents under evacuation alert have been notified," the information bulletin states.

"BC Wildfire Service will continue responding to the Eagle Bluff wildfire 24 hours a day until further notice."

Additional air resources are being mobilized from both Kamloops and Penticton.

"Resources are continually challenged by the steep and rocky terrain in the area and site safety is a priority."

Southwest of Oliver, the four-kilometre-square Richter Mountain fire is being held with a helicopter and around 30 personnel. It's not expected to grow under current conditions.

"It's mostly just smoldering ground at this time. It's not producing a lot of smoke at this time," Swift said.

There have been 596 wildfires in B.C. so far this season, which started on April 1, with 29 currently active. This time last year, there had been 1,468 fires across the province, according to the fire service.

Humans have caused 57 per cent of this year's fires so far, and lightening has caused the remainder.

In 2018, late July and early August brought hot temperatures and thousands of lightening strikes across B.C. In less than two weeks, the wildfire service was responding to nearly 400 new fires.

With files from Jon Manchester/Castanet