Office of Police Complaint Commissioner’s annual report released this week
Dec 10, 2020 10:51 AM By: Mike Howell
Eight officers from municipal police departments in B.C. were ordered dismissed over a recent 12-month period following investigations into their conduct under the Police Act, according to the 2019-2020 annual report released this week by the Office of the Police Complaint Commissioner.

In half of the dismissals, the conduct related to officers either violating their positions of trust by engaging in “inappropriate” relationships or communications via text messages, or committing “inappropriate” or unwanted touching of another person.

“Even if a police officer retires or resigns from the police department during these proceedings [under the Police Act], the investigation will continue and their employment records will reflect the imposed discipline,” said the report, which reflects investigations concluded between April 1, 2019 and March 31, 2020.

A case study provided in the report of an officer being dismissed was related to the well-publicized story of Vancouver police constable Nicole Chan, who committed suicide in January 2019.

An investigation conducted by Police Chief Dave Jones of the Metro Vancouver Transit Police concluded that VPD Sgt. Dave Van Patten should be fired. Jones determined Van Patten committed discreditable conduct by entering into a relationship with Chan, who was under his supervision in the human resources department.

“He not only maintained a relationship with an individual who was junior in rank and service, but who was experiencing mental health related issues,” Jones wrote. “He sought to maintain privacy of their relationship to the detriment of both of them, and the Vancouver Police Department as a whole.”

Van Patten, who declined a public hearing in the case, is no longer with the department.

In another case involving the VPD, an officer resigned during an investigation that concluded he should be fired over allegations related to sexual assault.

A criminal investigation was initiated following a report that two female VPD officers were sexually assaulted while off duty at a party with co-workers.

Crown counsel approved charges but a stay of proceedings was entered.

However, the Police Act investigation — which was also conducted by Jones — found the allegations were “not minor and were troubling as they were sexual in nature and were considered to be a physical violation of each of the victims.”

The report includes an appendix that summarizes cases of substantiated allegations against municipal officers that resulted in discipline over the last fiscal year, ending March 31, 2020.

Some cases of note:

• An off-duty Oak Bay police reserve constable was intoxicated and urinating on a building in downtown Victoria. Same constable was found unconscious due to severe intoxication a few weeks later outside a Victoria nightclub. Discipline ordered: Written reprimand, but constable resigned prior to conclusion of investigation.

• An internal investigation was initiated after four Abbotsford constables submitted complaints against their supervisor regarding ongoing incidents which included harassing and bullying behaviour. The supervisor was alleged to have made remarks that could be considered derogatory and degrading, and to have screamed and sworn at his members, all contrary to departmental policy. Discipline ordered: Reduction in rank, training and re-assignment.

• A Vancouver police officer forgot to engage the safety on his “beanbag” shotgun, which resulted in a round being discharged while in a crosswalk. No one was injured. Discipline ordered: Written reprimand.

The report noted the OPCC received 419 “reportable injury” notifications from officers, with a significant number of injuries resulting from police dog bites (120) and “empty hand control tactics” used by police (177). 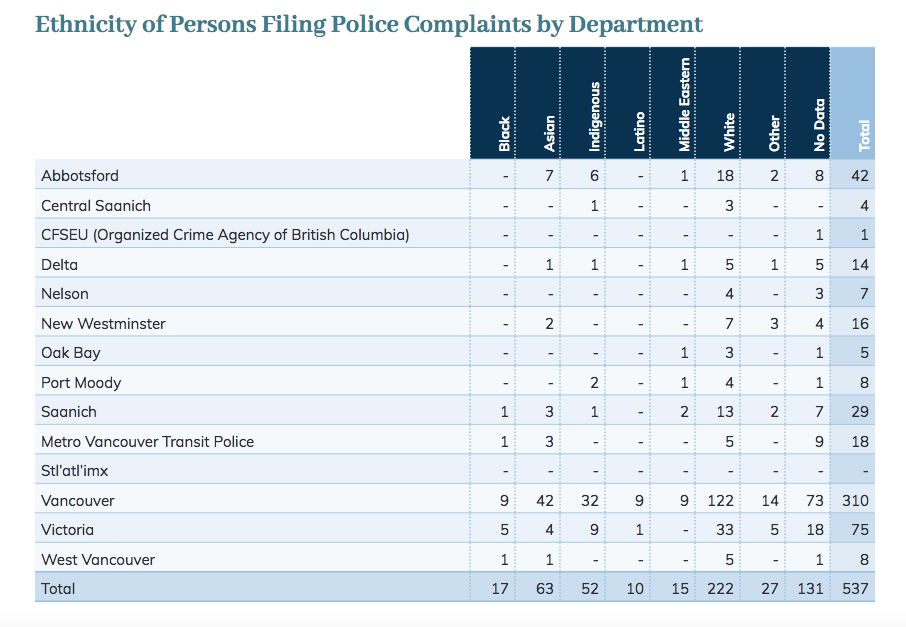 The OPCC report also provided a breakdown of complaints against officers by ethnicity of the complainant, which is data the agency began collecting in 2019.

In Vancouver, for example, of the 310 total complaints, Caucasians generated the most with 122, followed by Asians (42) and Indigenous (32) while Black, Latino and Middle Eastern accounted for nine each.

No ethnic data was available for 73 of the complainants and 14 were categorized as “other.”

The Victoria and Abbotsford police departments generated the second and third most complaints, with 75 and 42, respectively.