In July, a provincial court judge ruled he couldn’t uphold a penalty for not having insurance when ICBC offers no such insurance for the electric scooter in question.
0
Sep 19, 2019 7:30 AM By: Richard Watts 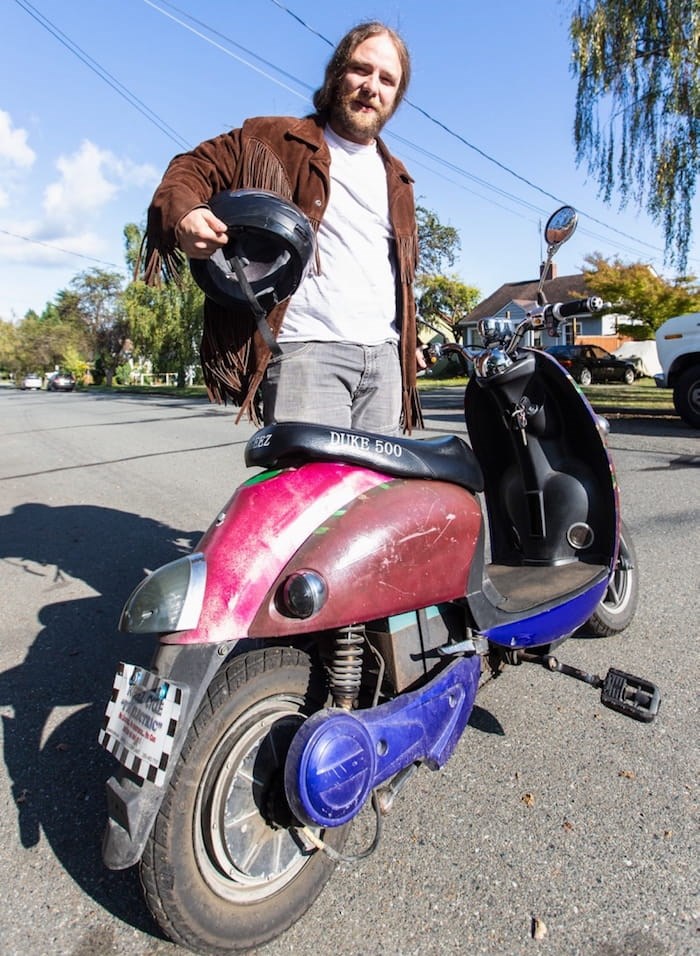 Evan Laine was ticketed by police for riding his electric scooter without insurance. Photo by Darren Stone/Times Colonist

When police stopped Evan Laine while he was riding his electric scooter on Finlayson Street in Victoria to hand him a $600 ticket, the officer was unmoved by pleas to let it go with a warning.

Laine had only just bought the machine and hadn’t installed the pedals. As far as the officer was concerned, the absence of pedals meant the machine was a motor scooter and required a licence plate and insurance.

“When I bought the scooter, the pedals were under the seat and not installed on the bike,” Laine said. “I asked him if he could just let it go with a warning.”

“‘Absolutely not,’” was the answer.

Laine took the ticket to court and it was tossed out. In July, a provincial court judge ruled he couldn’t uphold a penalty for not having insurance when ICBC offers no such insurance for a machine like Laine’s.

Laine had ridden his electric scooter into a tricky, sometimes confusing, area of rules governing battery-powered electric vehicles showing up on Victoria and B.C. streets.

In his case, the problem arose over the question: “Just when does an electric-motor-assisted cycle become a limited-speed motorcycle?”

His electric scooter is classified as “motor-assisted cycle” and is allowed on the road, according to B.C. regulations.

The rules state the motor must be electric, have no more power than 500 watts and be capable of going no faster than 32 km/h without pedalling. Anyone 16 or older wearing a bicycle helmet can ride one and neither licence plates nor insurance are needed.

Rules also state the motor must disengage when the rider stops pedalling or releases the accelerator or applies the brake.

The “stops pedalling” provision becomes confusing when it’s paired with others that say “it is not necessary to always be pedalling.”

Also, as in Laine’s case, some motor-assisted cycles look like motor scooters, those zippy little machines usually built with a big cowling on the front. Motor scooters are classified as “limited-speed motorcycles” and they are a different breed. Their motors are restricted to no more than 50 cc for gasoline or 1.5 kW for electric, and a top speed of 70 km/h. Limited-speed motorcycles require a driver’s licence of any class, registration, plates and insurance.

But motor-assisted cycles, whether they look like a motor scooter or not, are different. There must be no gas engines. The motor must be electric. It must be capable of being propelled with muscles using pedals. It must, however, be incapable of motoring off from a dead stop, hence the pedals.

Another rule stipulates the machine must be at a speed of at least three km/h before its motor engages.

It’s not just electric bicycles and electric scooters that are appearing on B.C. streets. Other electric vehicles have appeared and been chased away by government regulations. Already banned on roads and sidewalks are electric push scooters, electric skateboards and self-balancing boards or hoverboards, according to the Insurance Corp. of B.C.

“The province is currently evaluating the legislative, regulatory and policy frameworks to ensure they help support and acknowledge all road users and emerging active transportation modes,” said a ministry statement.

The Capital Regional District is also dealing with electric transport, such as motor-assisted cycles.

Jeff Leahy, senior manager of CRD Parks, said electric motor-assisted cycles are allowed on the trails such as the Galloping Goose.

But park workers might stop them to make sure they conform to the rules, usually by making sure they have working pedals.

Some trails in some wilderness parks, depending on their management plans, allow back-country, motor-assisted cycles.

Leahy said riders are expected to show caution and courtesy.

“We have multiple-use trails where cyclists should be encouraged to slow down,” he said.

“We have multiple users out there like children, walkers, hikers, dogs, etc.”

Kelly Goldbeck, owner of KGeez Cycle, has been in business for years selling electric cycles and scooters.

Goldbeck said he has heard major manufacturers, such as Yamaha, are gearing up to release new electric scooters that will compete in speed with the gas-powered motor scooters now licensed for B.C. roads. He plans to sell them.

He said public concerns over carbon emissions and other pollutants will ensure electric bicycles, electric scooters and other forms of electric transport become more common.

“Electric is not going to go away,” said Goldbeck. “It’s on the upsurge big time.”