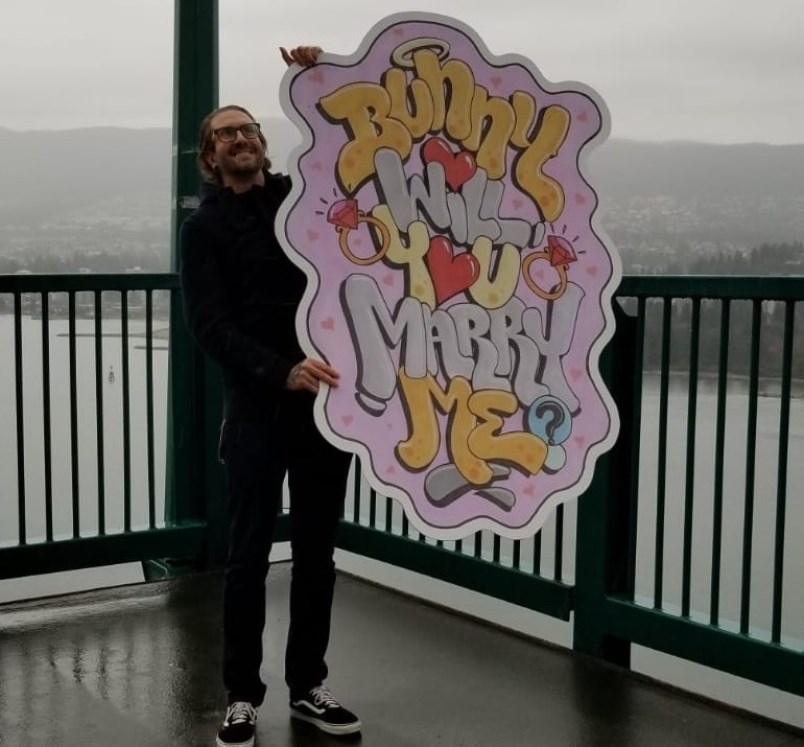 Scotty Minch planned for two months to propose to his girlfriend Bunny Blackler on the Lions Gate Bridge. Photo submitted

It was like a scene straight out of a romantic movie.

Vancouver’s Scotty Minch stood on the Lions Gate Bridge in the rain Thursday afternoon holding up a giant sign asking his girlfriend Bunny Blackler, who works monitoring traffic on the bridge, to marry him.

“I’ve always been a really big fan of romantic movies and I wanted to do something that you could never do in real life, that you see in movies all the time,” the 40-year-old told the Courier Friday.

“I wanted to wait for a perfect day for it, but I thought it would be more romantic to be in the pouring rain in Vancouver.”

The proposal took two months of planning, and the help of friends and one of Blackler’s co-workers, to pull off.

Blackler, 30, said she had just started her shift at Miller Capilano Highway Services, where she does traffic control and monitoring for Highway 1 between Horseshoe Bay and First Avenue from the Ministry of Transportation building in Coquitlam, when her co-worker mentioned that there was someone on the bridge.

She said her first reaction was that the police would deal with the situation, but her co-worker told her to get up and look at the monitor.

“And I see someone holding a big sign and I was like, ‘What is that?’ So I run over to her computer and I realize it’s Scotty holding a sign that says ‘Bunny, will you marry me?’ and I just freaked out.”

After talking on the phone, Minch, who is a mental health worker in the Downtown Eastside, drove from the bridge to Blackler’s office.

“I went up to her office and got on one knee in front of all her [co-workers] and put that ring on her finger,” he said.

As for the impending wedding, the couple already had a three-day trip to Las Vegas in the works before Minch proposed.

“We’re kind of thinking about doing a little two-in-one wedding and honeymoon for three days and then maybe someday save for a bigger trip if we can,” Minch said.