'We found him': Ex-addict finds Downtown Eastside hero after 13 years

The mystery man who helped a young woman stuck in a cycle of homelessness and drug addiction on Vancouver’s Downtown Eastside 13 years ago has come forward.
Jul 25, 2019 2:03 PM By: Elisia Seeber

BC RCMP Senior Sergeant Brent Elwood was the man who stopped to help Krisi Ferris on the Downtown Eastside in 2006. Photo courtesy of Brent Elwood

The mystery man who helped a young woman stuck in a cycle of homelessness and drug addiction on Vancouver’s Downtown Eastside 13 years ago has come forward.

Calgary mother Krisi Ferris reached out to Vancouver Is Awesome last week for help searching for the off-duty police officer she credits with "saving" her life on East Hastings Street back in 2006. 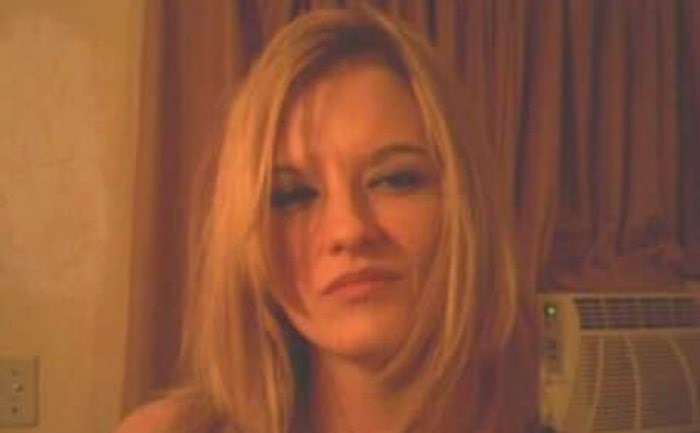 Krisi Ferris back in 2006. Photo: Supplied

Now sober with her life back on track, Ferris had been looking for the man for almost five years to thank him for helping her get home to her family in Alberta all those years ago.

This week, she finally got her chance.

The man who stopped to help her was Brent Elwood, a BC RCMP Senior Sergeant and NCO/ic of the Explosives Disposal Unit. He reached out to both V.I.A and Ferris during the weekend to let us know. 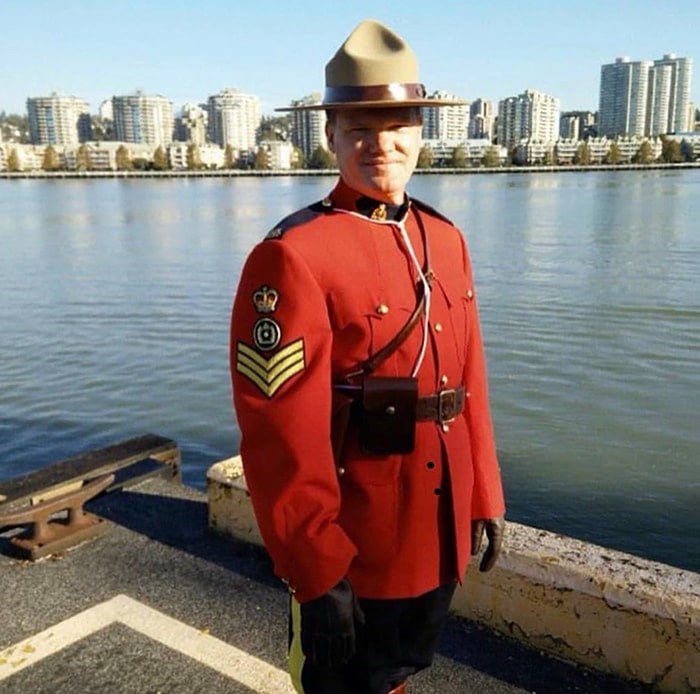 BC RCMP Senior Sergeant Brent Elwood was the man who stopped to help Krisi Ferris on the Downtown Eastside in 2006. Photo courtesy of Brent Elwood

The last time Elwood ever heard of Ferris was when a bus driver called him to let him know she had safely arrived back home in Calgary. That was over a decade ago.

So it was “quite a shock” for him when his wife ran downstairs to tell him about a story she was reading online about Ferris and her mystery Good Samaritan.

“As soon as she started reading it she knew right away it was me,” Elwood told V.I.A.

The 53-year-old said he was relieved to find out Ferris was doing so well after all this time.

“I had thought about her over the years and wondered if she was OK,” Elwood said.

“It was exciting to see she seems to be doing quite well.”

Elwood, who has been an RCMP officer for 20 years now, said he was driving home after having dinner with a friend the night he spotted Ferris walking alone and looking distressed on East Hastings Street, near Columbia Street. He had been on-call and was driving his dark blue work truck at the time.

Looking back, he said the want to help her just came naturally.

“It was just an instinct,” he said.

“Being a cop you kind of pick up on things while you’re driving, even if you’re off duty.

“I live in North Burnaby so I always drive through that East Hastings strip.

“I saw her pushing a suitcase, so at first I thought, ‘Oh is this a tourist that’s lost, this is not the area she should be in if she’s looking for a hotel or something.’”

He said he slowed his truck down and rolled down his window and asked if she needed help.

“It was kind of funny because being that area the first thing out of her mouth was: I’m not a hooker,” he recalled.

He said he replied: “No, I didn’t think you were but it looks like you might need some help.”

He said Ferris was pretty skeptical about who he was until he told her he was an off-duty RCMP officer and showed her his badge.

“She started opening up to me about her problems – she told me she came down here [Downtown Eastside] with her boyfriend but now she was on her own and she couldn’t seem to get out of the cycle of living here,” Elwood remembered.

“She told me she lived in Calgary and had a daughter she wanted to get back to but every time she got a bit of money she spent it on drugs.”

After hearing her story, Elwood wanted to do what he could to help her.

He said to Ferris: “If you’re truly sincere about getting out of here I can help you with that.”

Elwood paid for her hotel room that night and bought her a bus ticket home for Calgary with her own money, so she wouldn’t spend it on drugs.

When he got home he told his wife about what had happened and she packed Ferris a lunch for the road trip.

“My daughter, who was only three at the time, I kind of told her what was going on and she picked out one of her dolls – a Cabbage Patch Kids doll – for Krisi to bring to her daughter,” Elwood said.

To his surprise, she was there in the morning. He said he spoke to Ferris’s mum prior but couldn’t remember the entire conversation.

“I remember talking to her about putting her on the bus and making sure someone was there to pick her up because I didn’t want her getting to Calgary and getting off the bus and thinking ‘now what,’” he explained.

“Her mum was relieved but at the same time a little skeptical about it."

He also asked the bus driver to call him when Ferris got off the bus in Calgary.

“It was to know she didn’t get off at the next stop and go back to Vancouver," Elwood said. "He [the bus driver] later called me and said she got off the bus in Calgary. That’s the last I heard of her.” 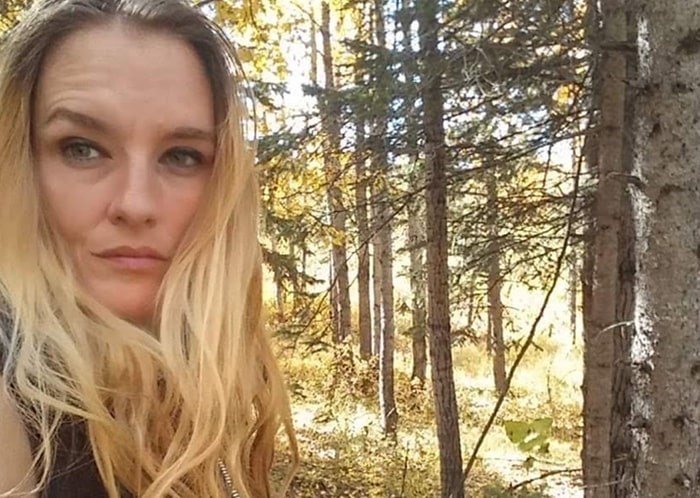 Now, after all this time, Elwood and Ferris have reconnected and are emailing back and forth. The two plan to meet up in the near future, either in Vancouver or Calgary.

Elwood said Ferris had opened up to him about how his kind actions had stuck in her mind and helped her to stay sober.

“It was touching because she said it was the fact that I stopped and helped her and that I was the only one that had faith in her, that helped her push her way through her relapses and get sober again,” he said.

While he was grateful for the kind words, he said it was more so Ferris’s resilience and determination that got her to the healthy place she is in today.

“The fact that she’s made it this far has a lot more to do with her and her resilience in wanting to get sober,” he said.

“Not too many people who end up on the Downtown Eastside end up getting out if. The percentage is extremely low, so it was good on her that she was able to overcome all of that.” 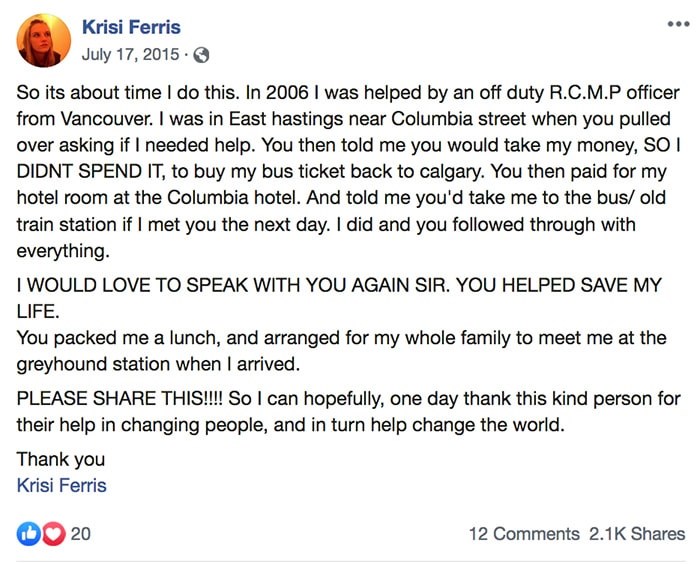 She said she was both happy and relieved to have found her “angel” Elwood.

“I feel like my recovery is more meaningful now than ever before,” Ferris said.

“How wonderful would it be to be meeting him again near my 10th year [of being sober]!”

As a cop, Elwood said he was always facing situations where people are in distress or calling for help, but this particular instance was a one-off.

“It’s part of what your job is, so you’re always helping people in some fashion but nothing to this level where I was off duty and put somebody on a bus to Calgary,” he said.

He encouraged the community to think about how one small good deed could have a positive impact on a person ... and perhaps, even change the course of their life.