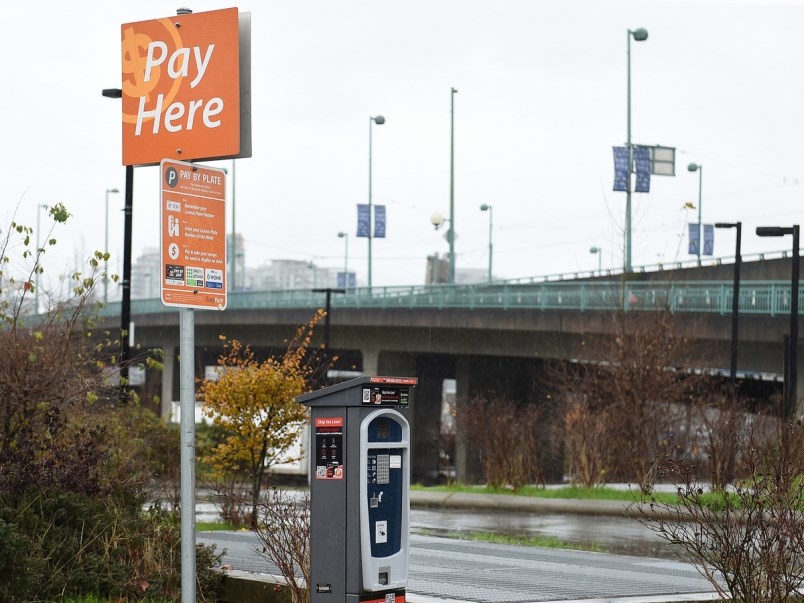 This parking lot near the Olympic Village SkyTrain station is among 30-plus locations across Vancouver where vehicle owners can opt to leave their vehicles until 6 p.m. after a night out of revelry. Photo by Dan Toulgoet/Vancouver Courier

More than 30 parking lots across the city will now include extended hours to allow holiday revellers added time to retrieve their vehicles the day after tying one on.

The campaign was rolled out Dec. 12 and represents a partnership between the city, MADD Canada and Preventable.

The 35 lots included in the initiative are spread across downtown, False Creek, Granville Island, Mount Pleasant, Kitsilano, Dunbar and in to East Vancouver.

In most city-owned lots, residents can extend their overnight parking until 6 p.m. the next day. At most of the city’s on-street parking, cars can be parked until 11 a.m. the next day.

Previously, drivers who parked overnight were required to return to the meter the next morning when paid parking became in effect, either to move their vehicle or add time.

The initiative is a result of two council-approved motions put forward this year by Coun. Lisa Dominato directing staff to expand the “Park Until” option in the city’s parkades to allow vehicles to easily be left overnight, and, to create a low-cost awareness campaign for residents on safe transportation choices.

“Giving residents easy, low-cost options to leave their car overnight when they’ve had too much helps keeps our roads safe all year round,” Dominato said in a news release. “I am very pleased that as a result of my motion we now have 30 city-controlled parking lots where the ‘Park Until’ functionality is available.”

Via parking apps (PayByPhone, EasyPark, HonkMobile) or on-site pay stations and attendants, drivers can plan their parking before a night out or, if needed, have a backup plan if they’ve had too much.