You might say this current winter storm has had a snowball effect on Metro Vancouver's roads and highways.
Jan 15, 2020 8:30 AM By: Lindsay William-Ross 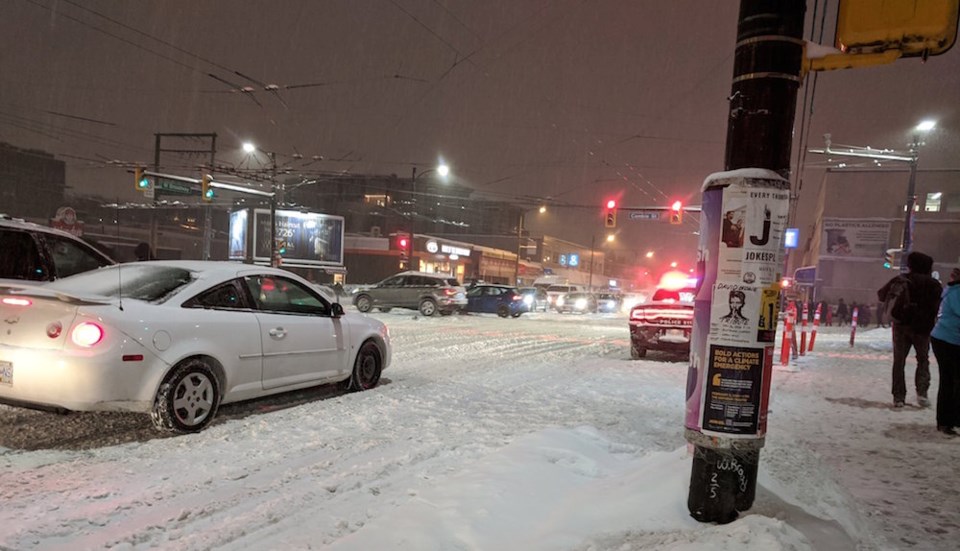 The Ministry of Transportation has issued a travel advisory for Metro Vancouver and the Fraser Valley:

"Because of extreme winter weather, motorists are advised to avoid all but essential travel throughout the Metro Vancouver region today, including the Fraser Valley," they caution, adding that a similar advisory applies to highways on Vancouver Island.

Here is the advisory in full:

"Persistent snow, high winds and cold temperatures are causing poor road conditions. Those who must travel are asked to use extreme caution and drive to the conditions. The ministry advises travellers to expect winter conditions for the rest of the week.

All motorists are encouraged to plan ahead and drive according to weather and road conditions, slowing down when they encounter bad weather or limited visibility.

Winter tire regulations are in effect, and drivers are encouraged to get the best tires they can. People should ensure their vehicles have tires with the mountain/snowflake or mud and snow (M + S) symbol when travelling on designated routes.

Also, keep space between your vehicle and the vehicle in front of yours so you can stop safely. Keep well back of all the winter maintenance equipment on highways so operators can perform their maintenance safely.:

Drive BC has issued a travel advisory for the Trans Canada Highway (Hwy 1) in the Hope area, while highways and roads in the Metro Vancouver are also affected by the snow and ice.

The Trans Canada Highway is now closed between Sumas way and Hunter Creek due to deteriorating weather conditions, detours are available via Hwy 7, Hwy 9, and Hwy 11. DriveBC is expected to issue an update on this route at 11 a.m.

Here are some of the current issues facing motorists in Metro Vancouver, according to Drive BC:

Some streets in the City of Vancouver are closed as well, as crews focus on major roads:

Due to the snowfall overnight and below freezing temperatures, our crews are currently focused on clearing the priority routes and have closed some steep hills for the safety of residents. We will continue to provide updates throughout the day.

Among those closures are Cambie Street, which has been shut down on the slope south of West Broadway.

Routes in Delta are also closed.

Those headed in or out of Burnaby Wednesday will also face road closures; full details are available here, via Burnaby NOW.

For anyone hoping to re-route themselves out of vehicles and onto public transit, TransLink is experiencing "significant delays." Read more about that here.

Environment Canada issues official 'snowfall warning' for Vancouver
Jan 14, 2020 2:37 PM
Comments
We welcome your feedback and encourage you to share your thoughts. We ask that you be respectful of others and their points of view, refrain from personal attacks and stay on topic. To learn about our commenting policies and how we moderate, please read our Community Guidelines.