The 52-unit temporary modular housing complex for the homeless that will be situated at 265 West First will be neighbours with Sole Food’s Olympic Village Farm.
0
Sep 21, 2018 4:32 PM By: Naoibh O’Connor 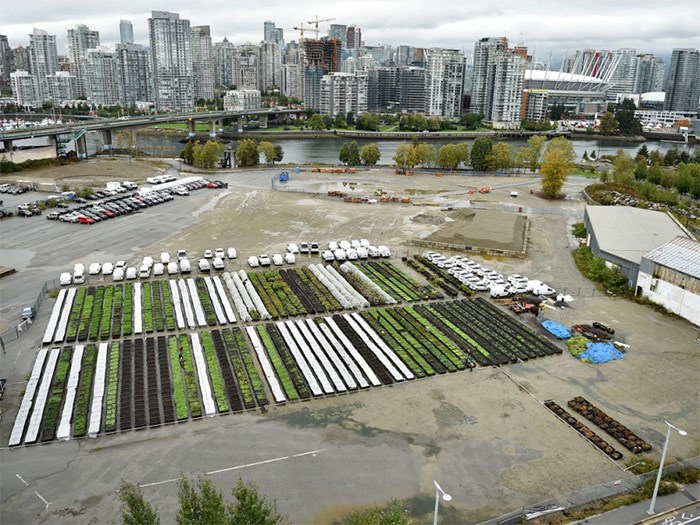 The 52-unit temporary modular housing complex for the homeless that will be situated at 265 West First will be neighbours with Sole Food’s Olympic Village Farm. Sole Food is working with the city and BC Housing on potential links between urban farming and the modular building. Photo Dan Toulgoet

The City of Vancouver's director of planning has given the green light to a 52-unit temporary modular housing complex for the homeless just west of Hinge Park next to Sole Food’s Olympic Village Farm. This brings the total number of approved units up to 554 at sites across Vancouver. The provincial government is providing $66 million for 600 units throughout the city.

The last of the 10 complexes, which have been made possible through the provincial funds, is still in the development permit stage. It’s for 52 homes at Union and Gore (898 Main St.). All the other modular buildings have been tenanted, are in the midst of being tenanted or are under construction.

Conditions that must be met before the development permit is issued for the 215 West First site include:

- retaining existing trees on the site along West First

Based on feedback gathered during open houses about the project, which generated 95 comments cards and 191 emails, the city will add extra garbage cans to the Olympic Village neighbourhood, regularly trim and maintain blackberry brambles and weeds along the sidewalk on West First, add extra resources to clean up and maintain the vacant sites in the area next to the modular housing complex and explore ways to beautify the vacant site to the north of the building.

PHS Community Services Society is the non-profit operator that will run the building and provide supports to tenants. Each unit will be 320 square feet and feature a kitchenette, bathroom and living/sleeping area. The building will include an amenity area, commercial kitchen, laundry room and common area for residents.

Sole Food, which is next to the site, is working with the city and BC Housing on potential links between urban farming and the modular building.

The city says the new housing won’t delay or impact future plans for the site, which is included in the Southeast False Creek Official Development Plan.