It’s the latest development in a recent push to allow backyard chickens in the city.
Jul 29, 2020 7:52 AM By: Dustin Godfrey 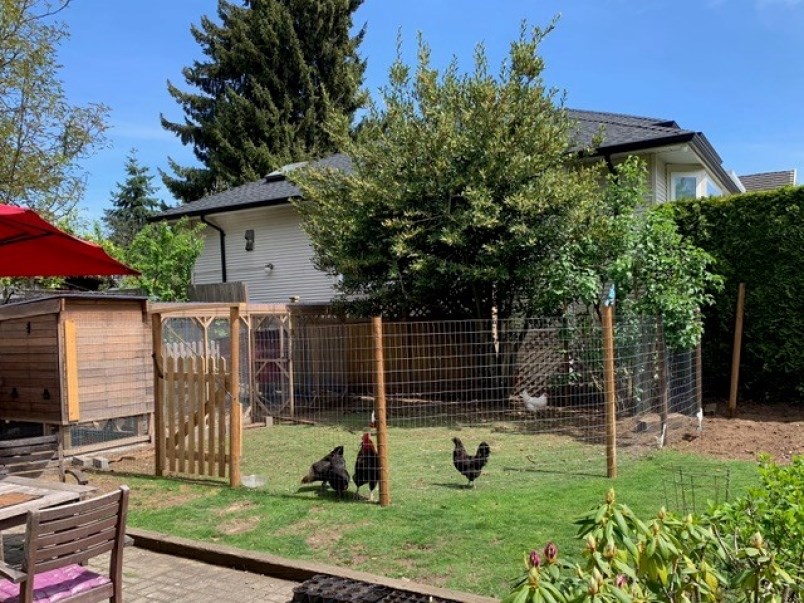 The city has put to a committee the question of whether to permit chickens in residential properties. Burnaby NOW file photo

A Burnaby woman says she’ll be challenging a $400 fine she received from the city for keeping chickens in her backyard.

Several households, including Sherri Benjamin’s family, have asked the City of Burnaby to change its rules around the issue. While council originally appeared willing to let the call slide, Coun. Joe Keithley returned to council this spring, after hearing from residents, and called for the matter to be pushed to committee for consideration.

Since then, Benjamin has been in a back-and-forth with the city over her own backyard chickens. She was given an extension to July 10 to get rid of the chickens and got the $400 fine on July 14.

The family has until Aug. 5 to respond to it, and Benjamin said she will “obviously” file a dispute against it – even if only to get an extension until the fall, when Keithley told Benjamin the city should be getting to the point of making decisions.

“It would be nice to just have them off our backs until the fall,” Benjamin said.

The alternative would be to give up the family’s chickens. Benjamin’s son has grown attached to the chickens, though, and it would be frustrating for the family if the city turns around and permits the poultry.

Benjamin also takes issue with the city’s lack of an explicit ban on backyard chickens. Residential districts do not explicitly ban chickens – nor do they mention animals of any kind, including dogs or cats. In fact, few bylaws mention chickens or poultry, with a brief mention of dead poultry in the health bylaw, poultry food scraps in the solid waste bylaw and street-roaming chickens in the animal control bylaw.

City spokesperson Chris Bryan said the zoning bylaws are permissive, meaning they outline what is allowed on properties rather than what is not allowed. He noted the agricultural districts explicitly allow chickens on those properties.

“I think it’s kind of unfair. Without explicit laws, that kind of is an arbitrary request on the city's part,” Benjamin said, adding that since the NOW first reported on the Benjamins’ situation, other chicken owners in the city have spoken with her.

“Everybody that I’ve spoken to has read the bylaws the same way, so I think we’re all in the same boat.”