Singh would use federal money to 'encourage' provinces on health services

The billions of dollars the federal government transfers to provinces for health care gives it leverage that NDP Leader Jagmeet Singh says he'd use to push for better local services.
0
Oct 17, 2019 10:43 AM By: The Canadian Press 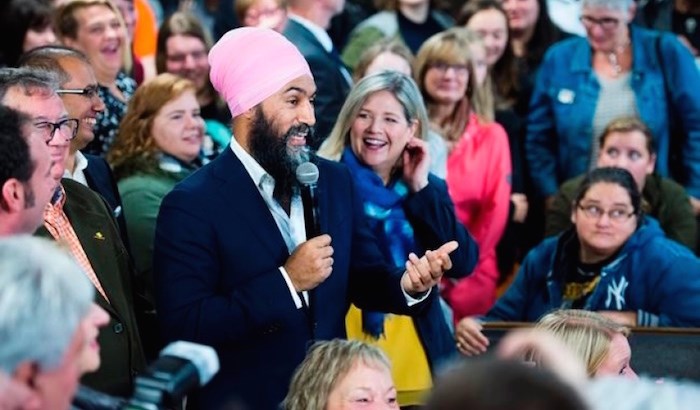 WELLAND, Ont. — The billions of dollars the federal government transfers to provinces for health care gives it leverage that NDP Leader Jagmeet Singh says he'd use to push for better local services.

Singh told the Winnipeg Free Press he would push for a particular emergency room in that city to be re-opened, and he kicked off his campaign by promising to get a new hospital built in Brampton, Ont.

But health care is a provincial responsibility and decisions about hospital operations and services are made by provincial governments, not federal leaders.

"When we negotiate things like universal pharmacare and dental care ... we can sit down with provinces and talk about when we're increasing investments, we want to see better health care services."

Meanwhile, when it comes to the provincial jurisdiction of Quebec over its controversial secularism law, Singh has tried to give that a wide berth.

Known as Bill 21, the law bans civil servants in positions of authority from wearing religious symbols and is popular in Quebec.

Every time he's been pressed to say whether that means he'd seek intervener status in a court challenge of this law, so the federal government could make arguments, Singh has said he doesn't want to "interfere."

Fareed Khan, founder of Canadians United Against Hate told The Canadian Press last week he has been "gobsmacked" at Singh's lack of conviction to go after the bill.

"Of all the people, I would think he would be the one who would be leading the charge to say not only is this wrong but were I to become prime minister I would immediately take action legally," said Khan, referring to the fact Singh wears a turban and a kirpan as symbols of his Sikh faith. Singh would be personally affected by the law if he tried to work as a teacher, for example, in Quebec.

When asked about why he's willing to get involved in provincial matters of health services while staying away from Bill 21, Singh sidestepped the question.

Although the law only affects Quebec, the stances federal leaders are taking on whether they would use federal powers to challenge it as discriminatory have become an issue both within and outside Quebec in the federal campaign, a test for how far federal leaders are willing to go to support minority rights.

Campaigning in Quebec on Thursday, Liberal Leader Justin Trudeau did not answer a direct question about whether he thinks Bill 21 is discriminatory, instead saying a re-elected Liberal government is open to intervening later.

"We have Quebecers taking their government to court right now to challenge a law that they feel is unjust," Trudeau said at a campaign stop in Trois-Rivieres, Que.

"We are not going to intervene in this step of the process, but as I’ve said, a federal government always needs to be ready to defend fundamental rights, whether it be women’s rights, LGBT rights, rights of minorities or rights of francophone communities outside of Quebec," he said.

This report by The Canadian Press was first published Oct. 17, 2019.

—With files from Joanna Smith in Trois-Rivieres.