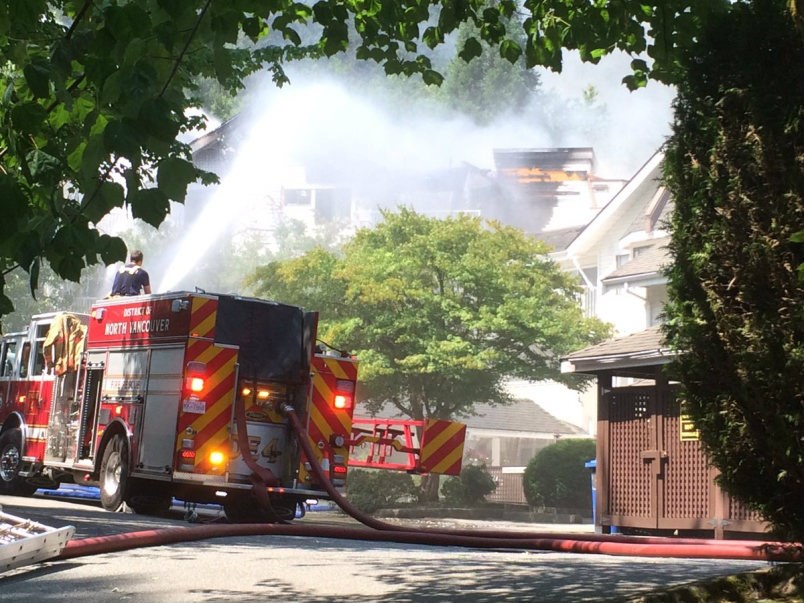 District of North Vancouver firefighters are battling a large fire that broke out at a seniors housing complex in Deep Cove Tuesday afternoon.

"They're still fighting the fire," said Stephanie Smiley, spokeswoman for the District of North Vancouver around 4:15 p.m. "It's in the attic and it's quite stubborn."

Seniors who live in the 60-unit housing complex were being evacuated and taken to an emergency reception centre at Parkgate Community Centre.

Smiley said as far as she knows, all residents were safely evacuated from the building.

Nearby residents and witnesses said the fire appears to have started on the fourth floor of the complex, although there is no official word on where or how the fire broke out.

Stephanie Alexandra, who lives in the Lions complex, said she was home in her apartment unit on the fourth floor when the fire alarm went off Tuesday afternoon. Alexandra said she looked out into the hallway and saw the manager knocking on doors, telling people to get out. When the manager opened the door to an apartment across the hall from her, where one of her neighbours was away, “black smoke came billowing out immediately,” she said.

Alexandra said she grabbed her purse, keys and camera and ran out of her apartment, forgetting to even put shoes on, before running down the stairs to the first floor where she continued to knock on doors, yelling “Fire! Get out!”

Alexandra said it wasn’t until she got outside that she realized how serious the situation was. “Fire engulfed the apartment quickly as the fire trucks arrived,” she said.

Alexandra said she saw two women who live in the complex get rescued from their balconies.

Fire crews quickly got hoses on to the blaze but it took some time to get it under control, she said.

McCarthy said she’d been told everyone from the Lions complex had been accounted for.

Air quality in Deep Cove remains poor because of the smoke, she said.

“We’ve still got all the rescue officers walking around with masks on.”

The North Shore’s Emergency Management Office issued an alert about 3 p.m., warning area residents to shut their doors and windows because of the air quality.

Much of area near to the Lions housing complex remains blocked to traffic at this hour and buses were being re-routed.

In smoke ? The first responders are doing an amazing job getting everyone out safely. pic.twitter.com/KEwwIGRRCf

Thanks to all the #NorthVan firefighters and all the citizens that saved a lot of lives today. #deepcove pic.twitter.com/0W8MXTwbhZ

Due to a major structure fir in #DeepCove the air quality is extremely poor. Please shut all doors and windows and remain indoors if possible if you are in the area. Further updates to come.