PHOTOS: Annual Flight with Santa takes to the skies over Vancouver

“Get ready folks, we’re going to the North Pole!” And with that the 14th annual Flight with Santa Claus took off Wednesday from Vancouver International Airport.
0
Dec 6, 2018 12:13 PM By: Jessica Kerr

“Get ready folks, we’re going to the North Pole!” And with that the 14th annual Flight with Santa Claus took off yesterday from Vancouver International Airport.

A partnership between Air Transat and the Children’s Wish Foundation, Flight with Santa Claus gives children with high-risk, life-threatening illnesses, or serious genetic and neurological conditions, a chance to take to the sky on a special mission — find Santa and bring him back to Vancouver to visit all the children there. 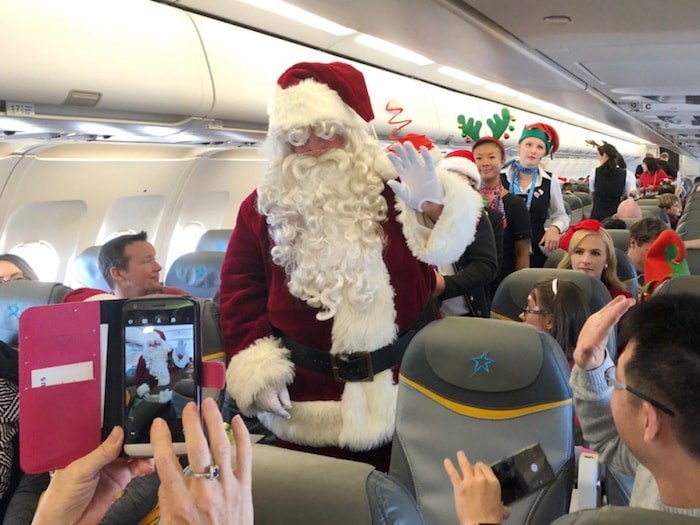 Santa makes his way through the plane on the 14th annual Flight with Santa, a partnership between Air Transat and the Children’s Wish Foundation. About 30 wish kids and their families took to the skies Dec. 5 on a mission to find Santa and bring him back to Vancouver. Photo Jessica Kerr

The holiday festivities start on the ground with some pre-flight fun including a cookie bar, crafts, face painting, magic with Maestro the Elf, a photo booth and a visit from Tinkerbell and Rapunzel. Christmas music fills the air and the flight staff is decked out in festive gear.

Eight-year-old Maya Ahuja excitedly shows dad Gary the Christmas tree she made out of popsicle sticks.

Diagnosed with tetralogy of fallot, a congenital heart condition that is comprised of four heart defects, shortly after birth Maya had her first open heart surgery at just four months old. Two years ago doctors discovered a second hole in her heart, which meant a second open heart surgery.

In all Maya has had seven surgeries so far in her eight short years. 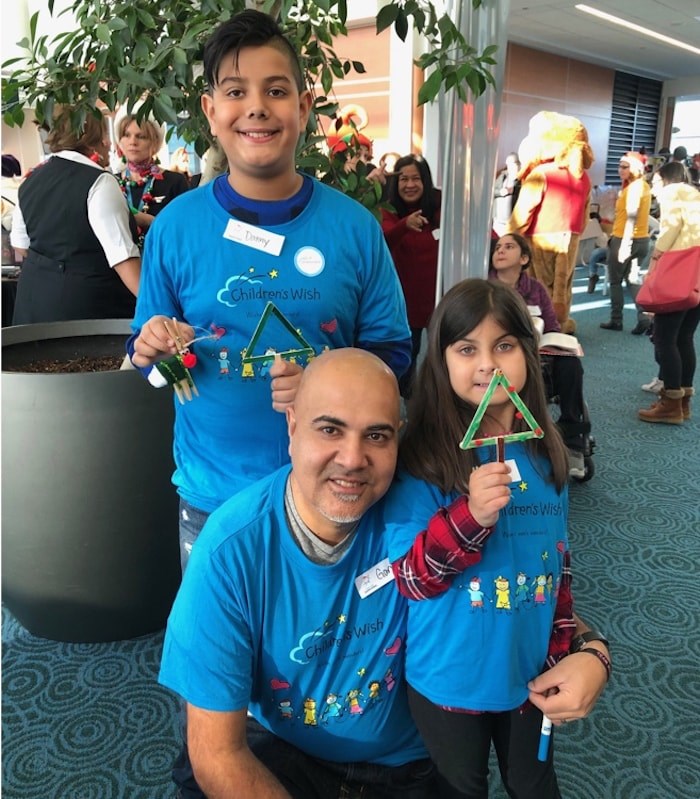 Maya Ahuja, 8, with her dad Gary and older brother Danny, 11, waiting to board the Flight with Santa. Photo Jessica Kerr

“She’s been through a lot,” Gary said, and there is more on the horizon.

“She needs her pulmonary valve replaced,” he said. “We go to cardiology (at B.C. Children’s Hospital) every year, we just went, and we’ll just wait and see how her heart is doing… You look at her now and you wouldn’t know how sick she was.”

Events like Flight with Santa Claus, and the wishes granted by Children’s Wish Foundation, give families going through stressful medical treatments and appointments, and life threatening diagnoses, something to look forward to.

“It’s nice that there are things like this,” Gary said.

Nathalie Legault, director of in-flight service with Air Transat, said staff looks forward to the Flight with Santa all year long. The event takes place in Vancouver, Toronto and Montreal every year and is funded through the company’s Small Change, Big Hearts program — at the end of each flight passengers are asked to donate any small change they might have — as well as other staff fundraisers throughout the year.

“Every year all the employees are just waiting for this day… they are so into it,” she said. 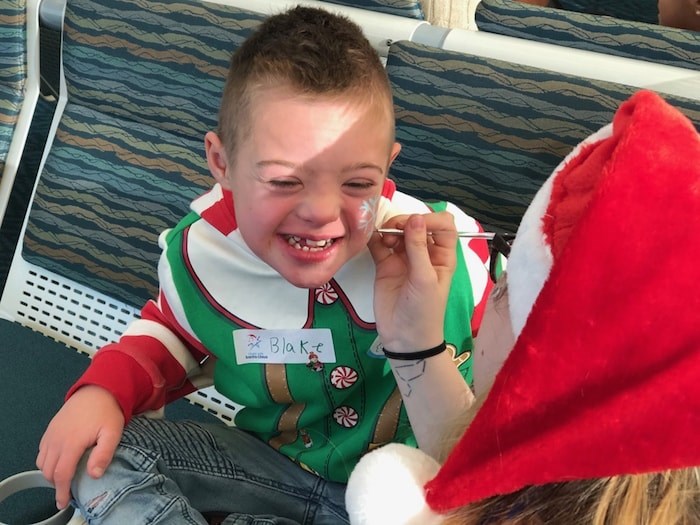 Blake Devisser, 10, gets his face painted as he waits to board the annual Flight with Santa Claus. Photo Jessica Kerr

Ten-year-old Blake Devisser smiles up at dad Erik as he gets a snowflake painted on his cheek as he waits to board the place. Blake has Down Syndrome, a congenital heart defect and pulmonary hypertension, but you wouldn’t know it as he gets up and runs off to the next thing when his snowflake is done.

The excitement is palpable as everyone boards the plane and gets ready for takeoff. After everyone gets a snack and sings some Christmas carols, the pilot announces that he’s spotted something unusual, and red, on the radar. It’s Santa’s sleigh! A few minutes later, the plane is filled with a chorus of excited screams and cheers as the big man in red emerges from the cockpit.

Santa walks down the aisle greeting everyone. He stops to talk to each child and hands them a red stocking containing a gift (a toy plane), as the plane heads back to Vancouver. 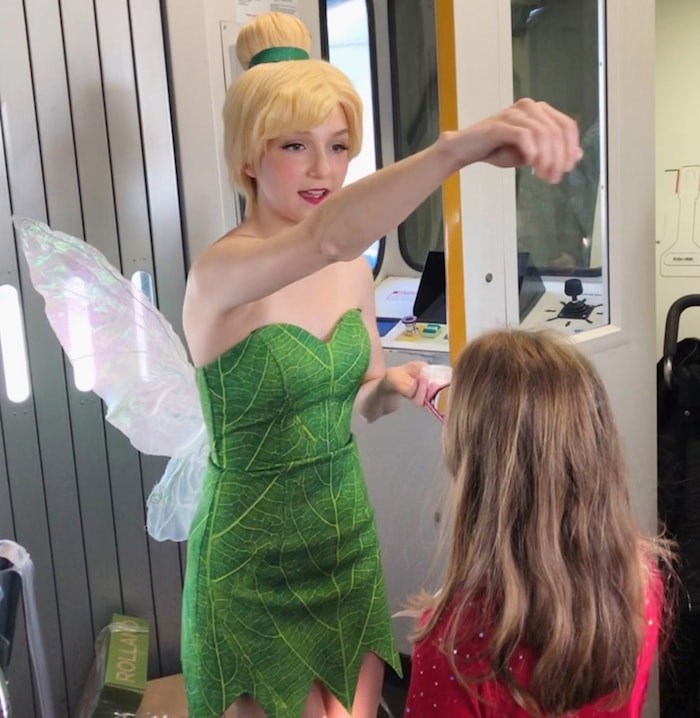 Tinkerbell sprinkled all the kids with fairy dust and told them to think good thoughts before the plane took off. Photo Jessica Kerr

“It’s kind of the perfect embodiment of what we do with wishes. We create magic and joy and excitement for kids and that’s what today is about too and it’s a really great way to kick off the holidays,” said Hannah Smith, interim provincial director with the Children’s Wish Foundation’s B.C. and Yukon chapter. 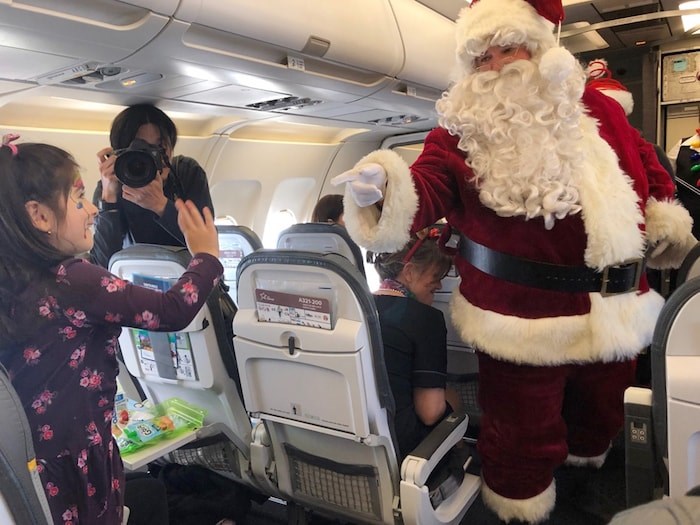 Aria Tejani, 4, shares a moment with Santa Claus as he makes his was through the plane. Photo Jessica Kerr

“We say we put a lot of care and love into each and every wish and it’s really nice to be able to express that through an extra experience making memories over the holidays with Air Transat and the families.”