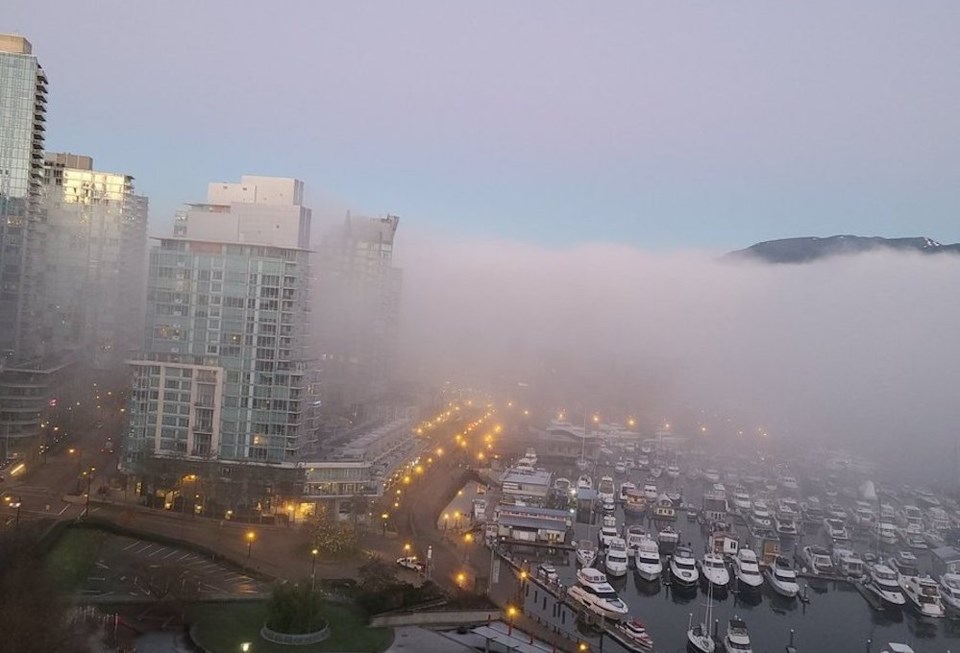 The thick fog rolled in across the waterfront and over buildings, which offered a breathtaking perspective from several areas in the city.  Photo: @NLsoltani / Twitter

The thick fog rolled in across the waterfront and over buildings, which offered a breathtaking perspective from several areas in the city.

Today, Environment Canada calls for bright sunshine during the day, but tomorrow is expected to see some clouds. That said, the sun is expected to return Friday, so locals will get to enjoy more of the pleasant weather heading into the weekend.

Have a look at some of the best fog photos from the city this morning.

The moon, the fog and the morning. #coalharbour #Vancouver pic.twitter.com/qIfxqYiKDZ

I feel, somehow, watching the sunlight seep slowly through the morning mist, gazing upon the buildings and cars and people emerging from behind the lacy curtain, that my mind, too, can shake off the fog and the dark; that I am able, once again, to burst back into a bright world. pic.twitter.com/YNz9mQaXL7

Fog over the Fraser as seen from New Westminster pic.twitter.com/4w8T8ml63N

I will never not be amazed about the rolling fog in Vancouver pic.twitter.com/SdyPx7uhjk

The fog is very cool!! pic.twitter.com/KsDn54gwQ0

Fog in the harbour this morning pic.twitter.com/3V6c77i8hz

These spellbinding sunset snaps from Vancouver will leave you speechless (PHOTOS)
Nov 25, 2020 12:41 PM