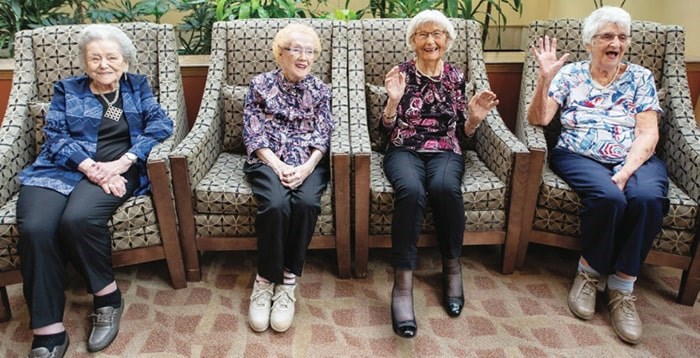 From left, Shirley Thurlbeck, who turns 100 on Sunday, Jean Kean, 101, Eula Johnson,102, and Eleanor Pattison, who reached 100 on Thursday, celebrate at the Wellesley complex in Victoria on Friday. Thurlbeck says she wants Òballoons, fireworks and the Chippendale dancers on my birthday night.Ó Photograph By DARREN STONE, Times Colonist

Having that many people reach such a milestone in one place is a rarity, said activity co-ordinator Renee Claveau. “And we have some coming up, too,” she said. “Some people are going to be 100 probably next year.”

Claveau said the quadruple birthday party was “a very special occasion” for the Wellesley complex, which is home to about 200 residents in both assisted and independent living.

Shirley Thurlbeck, a Winnipeg native, had an interesting answer when asked what she wanted for her 100th. Her big day is Sunday, just as a great-granddaughter turns one. “I want balloons, fireworks and the Chippendale dancers on my birthday night,” she said when questioned by staff.

Asked for the secret to a long life, Thurlbeck pointed to her upbringing. “I had to walk to my elementary school a whole mile and to my senior school four miles, and all the veggies that we had were not sprayed,” she said. “Everything was natural. I believe in that.”

On top of that, she said she has good genes. “That’s the most important thing.”

Edmonton-born Eleanor Pattison, who reached 100 on Thursday, remembers the days when streets were made of dirt and sidewalks were wood.

Pattison, one of seven children, said her tip for longevity is to live your best life and stay active and positive. She said she is impressed by all the technological changes during her life.

Pattison and Thurlbeck are best friends who are known as the Wellesley’s “bingo queens.”

The oldest of the group is 102-year-old Eula Johnson, who was born in what was then Fort William, Ont., now part of the city of Thunder Bay. She turned 102 on April 6.

She said she has a simple secret to longevity — moderation — and added that it’s what you do after 100 that really counts.

Johnson pointed to the great number of changes she has seen in her lifetime. “From the horse and buggy to the airplanes and now the computers,” she said. “I’ve seen it all.”

All of that change makes the 20th century one of the best there has been, she said. “It really has been the most progressive, I think.”

Jean Kean, who was born Sept. 25, 1918, in Melbourne, Australia, credits her long life to the fact that she stayed single.

Jean and her twin sister, Bonnie, both lived at the Wellesley until Bonnie died three years ago. The sisters had been in show business together in their younger years and travelled with a small troupe.