Free pads and tampons should be in school bathrooms, claims Vancouver woman

A Vancouver woman wants the New Westminster school district to be the first in the province to install coin-free pad and tampon dispensers in every school.
0
Jan 9, 2019 7:04 AM By: Cayley Dobie

A Vancouver woman wants the New Westminster school district to be the first in the province to install coin-free pad and tampon dispensers in every school.

Right now, most schools expect girls to have their own period products. If they don’t, they have to seek out a counsellor, nurse or school administrator to get a pad or tampon.

“You’re asking girls, who are bleeding, to go walking downstairs, across the school to try and find somebody,” Tribe said.

“Then they have to go trotting back up to the bathroom, clean themselves up and deal with this. I think it’s outrageous, frankly. When you consider that the boys go into the bathroom and they have ... all their bodily needs covered, but the case is not the same for the girls.”

Tribe believes these kinds of policies breed shame and perpetuate a culture of concealment, where periods aren’t talked about openly and pads and tampons are hidden in waistbands and sleeves. 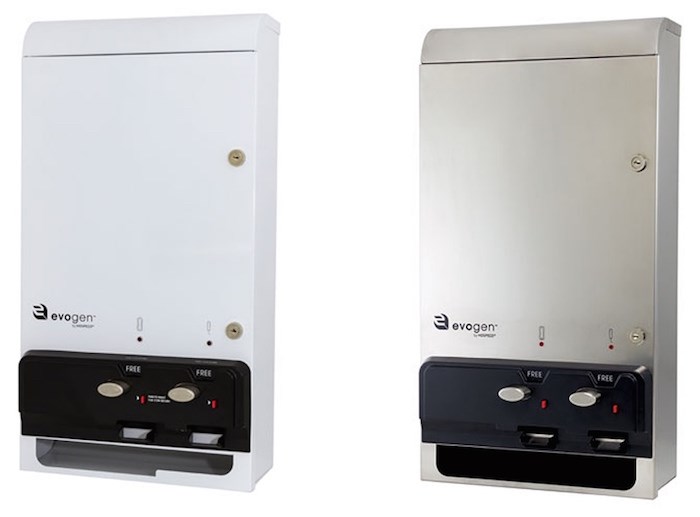 Vancouver woman Selina Tribe wants school districts to install coin-free pad and tampon dispensers, like these one manufactured by Hospeco, in all schools. Photo by Hospeco

“These are inexpensive items; they range from $200 to $300 to get it installed. They don’t require coins, and then all you need to do is stock it with these single-use paper products that should be considered just the same and as essential as toilet paper,” she said.

Tribe estimates it would cost the New Westminster school district about $5,000 to install dispensers at New Westminster Secondary School plus $1,600 annually to stock them. The cost would be about $1,900 to install the devices at Fraser River Middle School and an estimated $400 to stock.

Tribe will make her case in front of the New Westminster school board tonight at its education policy and planning committee meeting, and next week she’ll be in Burnaby to present to that city’s school board.

“School by school, it’s a trivial amount of money and that’s how I hope they’re going to look at this,” she said.

“When you go into the boys’ bathrooms, there’s not just stalls there; they have urinals as well. Urinals which require plumbing and equipment and installation and not for any special reason except for the convenience of boys to go quickly. So there’s precedence for this convenience.”

“We’re on our period 20 to 25 per cent of the time. It’s not like a one-day thing, and, even if you compare it to having a poop or a pee, even those things you can hold a little bit,” she said. “There’s no bladder for the blood. It just falls.”